Over the years, the Kraft Fight Hunger Bowl has garnered a bit of a reputation as… hmm, how do I put this nicely?…  a bowl game nobody wants anything to do with.

Last year the game featured quite possibly the least compelling matchup in recorded football history, when UCLA and Illinois each showed up to San Francisco with apathetic attitudes and interim coaches (Ron Zook and Rick Neuheisel had each been fired weeks before the game), resulting in a painfully boring 20-14 final that put everyone into a foul mood heading into the New Year. In 2010 Nevada and Boston College went toe-to-toe in a 20-13 final where the signature moment was… wait, what was the signature moment again?

Yet despite all those duds, the 2012 matchup does at least provide some hope.

Arizona State and Navy were hardly two of the best teams in college football this year, but they do pose an interesting matchup, between unique clubs with polar opposite offenses that should result in a fun back-and-forth game with plenty of points on the scoreboard.

That’s what we’re hoping for, anyway.

At the very least, hey, it can’t be any worse than what we’ve been subjected to the last few years, right?

Admittedly I’m not much for pop culture, so comparing anything- let alone a second-tier postseason football game- to a TV or movie star isn’t easy for me.

With that said, have you ever seen a movie with Dawson? I’m thinking something like Seven Pounds (which was actually quite good) or, if I care to date myself a little bit, He Got Game? Do that and you’ll realize that while Dawson doesn’t jump out at you as a knockout within the 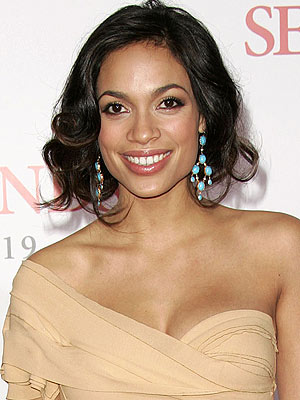 first few minutes of the movie, by the end you can’t but think to yourself, “You know, she’s actually sort of cute.”

Well that’s the Kraft Fight Hunger Bowl in a nutshell right there.

At first glance Navy and Arizona State are hardly a matchup of a bowl viewers dreams. Then you look at the two teams, see the potential they provide and realize, “Wait a second, this might not be so bad.”

The Fiesta Bowl, it is not. But again, the matchup could be worse.

A Word About Our Sponsor: Admittedly, “The Kraft Fight Hunger Bowl” may have the single goofiest name of any postseason game this year. It certainly doesn’t conjure up images of football grandeur either.

At the same time, the name and game are important. That’s because for every ticket purchased for the event, Kraft donates one meal to a local Bay Area food shelter. Hence the title of the game, the “Fight Hunger” Bowl. Get it? So far, the game has been responsible for donating over 200,000 meals to need San Francisco residents.

So therefore, go ahead and make bad jokes if you want. But also realize that Kraft is doing some really good things in the lead-up to this bowl game.

Aces: Speaking of bad jokes, hey look everyone, it’s Todd Graham!! Who knew the man who changes jobs like you and I do socks in the morning, was capable of making it through an entire regular season and subsequent postseason without skipping town?

(Thank you, thank you, I’ll be here all week)

In all seriousness though, while the jokes about Graham are outdated, his success on the field speaks for itself. His offense was particularly strong in year one in Tempe, averaging 36 points per game and in the process turning quarterback from “Little Used Back-Up” to “Star of the Show.” Kelly had thrown just four total passes his entire career entering 2012, yet threw for over 2,700 yards and 25 touchdowns this season.

Deuces: While the seven wins in Graham’s first year are impressive, the quality of them isn’t. As a matter of fact, until Arizona State upset Arizona in the last game of the regular season, there wasn’t a single signature win on their schedule. Of Arizona State’s first six victories, not one came against a bowl eligible team.

Now granted, in a sport where an upset can happen on any given Saturday, something needs to be said about a club which simply shows up and takes care of business against the teams they’re supposed to. At the same time, when you play five quality clubs all year (Oregon, UCLA, USC, Oregon State and Arizona) and lose to four of them, well that doesn’t totally bode well going into bowl season either.

Wild Card: Running back Cameron Marshall, who was quite possibly the biggest enigma of anyone in the Pac-12 this season. Marshall rushed for just 524 yards and seven touchdowns in 2012, numbers that are especially disappointing compared to his junior season, when he rushed for over 1,000 yards with 18 touchdowns.

Still, Marshall is a player who can take it to the house any time he touches the ball. And as a senior with only one more game to impress NFL scouts, expect a big game from him.

Aces: For Navy to win this weekend, they simply need to do what they always do, which is run the ball effectively. That triple-option offense has given nightmares to opposing defensive coordinators for years, and 2012 was no different; the Midshipmen put up 276 yards per game on the ground this past season, resulting in eight wins.

While those numbers are impressive on their own, they’re even more significant when you consider Saturday’s opponent. Arizona State ranked 76th in college football in rushing defense.

Deuces: For all their success this year, it’s also no secret that from a talent and athleticism standpoint, Navy simply can’t matchup with Arizona State. I don’t think I’m breaking any new ground by saying that, but it is worth repeating.

Beyond that, while Navy did have three victories over bowl eligible teams (compared to Arizona State’s one), it’s not exactly like Air Force, Central Michigan and East Carolina are college football powers or anything. What is especially concerning is that of the three genuinely good teams the Midshipmen played this year (Notre Dame, Penn State and San Jose State), Navy was outscored 96-17 and averaged less than six points per game in those three contests. Yikes!

I guess that’s a long-winded way of me saying: Navy’s 8-4 record is nice. But it’s not as impressive as it might be at first glance either.

Wild Card: For the Midshipmen, it’s fullback Noah Copeland. While Copeland’s season numbers don’t jump out at you (691 yards rushing), the sophomore saved his best games for Navy’s most significant ones. Copeland rushed for 209 yards and three total touchdowns in season-ending victories over Texas State and Army.

So you don’t forget…: Prior to last year’s disappointing 5-7 campaign, Navy had made eight straight bowl games dating back to the 2003 season. That number is especially impressive when you remember that from 1923 up until 2003, they had played in nine total postseason games.

Crystal Ball: Look, the simple truth is that as much as we love and respect what Navy has done this year, they’re simply overmatched from a talent standpoint heading into this game.

With a month to prepare for the triple-option and a newfound discipline in the transition from Dennis Erickson to Todd Graham, we expect the Sun Devils to roll in this one.