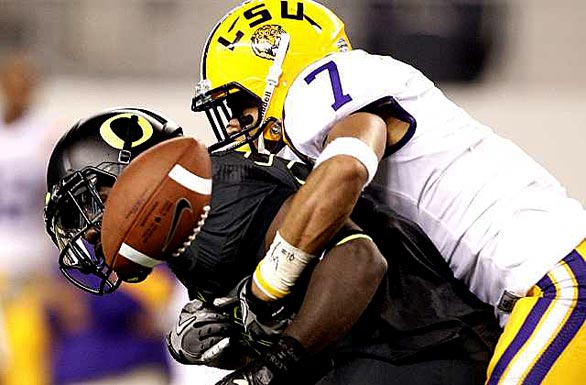 Unless you’ve been living under a rock for the last three days, by now, you probably know the news on LSU cornerback Tyrann Mathieu. Or more appropriately, we should probably call him say “Ex-LSU cornerback Tyrann Mathieu.” That’s right, the man who stole our hearts (not to mention the ball from a bunch of opposing receivers) was booted from LSU’s football team late last week after violating team rules.

Simply put it was a sad day for Mathieu, sad day for LSU, and sad day for anyone who cares about college football. Say what you want about Mathieu, but he was the single biggest game-changing player in the sport last year and the player who could impact a game in more ways than anyone else. The man will be missed.

Which is why today at Crystal Ball Run we’ve decided to take the opposite approach as most. While most of the college football world is mourning the loss of the Honey Badger, we here are celebrating him; not for the stupidity that got him kicked off the team last week, but the brilliance he brought every Saturday for the last two years.

That’s right, we decided to count down the Honey Badger’s Top 10 moments in an LSU uniform. In no particular order, here they are.

10. A coming out party at the Cotton Bowl:

When reflecting back on the 2010 LSU season, most people remember the name Patrick Peterson. The defensive back and All-American was the star of LSU’s 11-2 campaign, finishing the season with 42 tackles and four interceptions before becoming a Top 10 NFL Draft pick.

However in his final game in an LSU uniform, it was a freshman cornerback who actually outshined the first team All-American. That player was Tyrann Mathieu and the 2010 Cotton Bowl officially served as his coming out party, as he finished with 5.5 tackles a fumble recovery and an interception that sealed the game.

Mathieu was named MVP of the Cotton Bowl for his performance.

9. Mathieu makes a name for himself against Oregon:

It only seems appropriate that we follow up Mathieu Cotton Bowl performance with the highlight of his next game in an LSU uniform, in the 2011 season opener against Oregon. As you may remember, it was Mathieu’s strip and score on a Kenjon Barner punt return that gave LSU the early shot in the arm they needed, and a quick 9-6 lead. The Bayou Bengals would go on to control the second half and win the game 40-27, their first of eight wins against ranked opponents in the 2011 season.

The fumble recovery served as the first of Mathieu’s many Heisman highlight reel moments in the 2011 season.


While the rest of the world came down with Honey Badger fever within the first few weeks of the season, it wasn’t until about Week 3 or 4 that ESPN finally caught wind of the phenomenon. Whenever it was however, they catch wind, as the esteemed Erin Andrews went down to the Bayou to catch up with him.

The highlight of the interview? How about the quote below:

“Even when you’re with girls you’ve got to think about make those big-time plays.”

Now that my friends is the Honey Badger we all know and love.

7. Speaking of the “Honey Badger Phenomenon:

You know you’ve made it big, when a clothing line is spawned completely off your own exploits. Obviously, that happened with Mathieu during the 2011 season. Not that the Honey Badger cared or anything.

6. Strip and score against Kentucky:

Back to the field, where Mathieu made maybe my personal single favorite play of the 2011 campaign against Kentucky. It came early in the third quarter when he jumped over a blocker, stripped quarterback Morgan Newton and returned the fumble for a touchdown.

Simply put, my description did the play absolutely no justice. Just know it was phenomenal. And watch the damn video, will ya!?!

5. Brent Musberger is all-in on the Honey Badger:

We’ve all seen the video where Brent Musberger goes ga-ga over the Honey Badger, and references him at least 22,500 times in one three hour broadcast.

But hey, it’s Monday and you hate your job. Why not watch it again?

4. Mathieu gets the best of Geno Smith:


While Mathieu had a few signature moments early in the year, it was against West Virginia when we realized the Honey Badger phenomenon was a real thing.

In that game, Mathieu tipped a pass to himself and returned it to the three yard line. LSU scored a couple plays later, to take a commanding 20-7 lead. They’d go on to beat West Virginia, the eventual Big East champs.

3. Punt return opens up a late season game against Arkansas:

As easy as it is it to forget now, LSU was in real danger of losing their first game of the 2011 season against rival Arkansas. The Hogs went up 14-0 before a Kenny Hilliard touchdown cut the lead to 14-7.

However, it was after the Hogs next series, which resulted in a three and out when the game truly changed. That’s when Mathieu took a 92-yard punt and sliced and diced through the Arkansas return team to tie the score up at 14 apiece.

LSU never looked back, outscoring Arkansas 24-3 from that point on, in a dominating 41-17 win.

2. The Honey Badger was at it again in Atlanta:

And it was one was one week later where Mathieu made an equally jaw dropping play in the SEC Championship Game as well. With Georgia up 10-0 after one quarter, Mathieu ripped off a 62-yard punt return that gave LSU its first points, and completely swung the game. From that point forward, Georgia didn’t score a single point, in a 42-10 victory.

Nothing proves Mathieu’s value quite like a trip to New York in early December for the Heisman Trophy ceremony. Sure Mathieu finished in fifth place, but the trip itself was symbolic: How good do you have to be as a defensive back just to get invited to New York? He was the first since Charles Woodson in 1997 to receive the honor.

More importantly, how much will that same player be missed this year?

The answer is a lot, and it truly is a shame that the Honey Badger era is over on the Bayou.