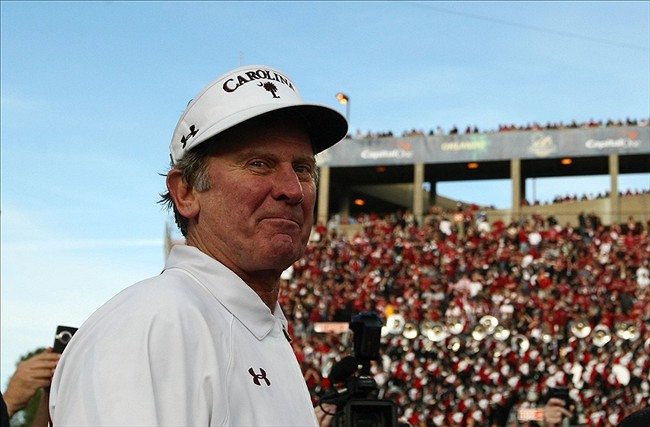 As the old saying goes, there are only three certainties in life: Death, taxes, and Steve Spurrier keeping himself surprisingly interesting, even as he nears his 70th birthday. Whether he’s walking around practice without a shirt on, drinking a couples beers with his bros, or cracking jokes at the expense of Georgia’s police blotter, whenever there’s a camera, reporter or notepad in front of Spurrier, he’s guaranteed to deliver entertaining material.

And on Wednesday, he once again delivered.

Granted, Spurrier didn’t quite go all nuclear on another football coach or program, but again threw out a “suggestion” to folks in charge of the SEC, a suggestion that most certainly seemed to have garnet-tinged undertones. Apparently Spurrier isn’t happy with how the SEC Championship Game participants are decided. And he let Sports Illustrated’s Andy Staples know it on Wednesday.

“Your division champ should be decided on division games. Last year, it wasn’t fair for Tennessee and Florida,” Spurrier said. “They both played LSU and Alabama. Us and Georgia didn’t. So, us or Georgia almost had to win the division simply because of the schedule.”

Aww, that Steve Spurrier, standing up for the little guy, huh?

Well not exactly. As Staples points out, you’ve got to think that Spurrier brought this all up because of the way the Eastern Division shook out last year. Had the East been decided solely by divisional games, well, it would’ve been the Gamecocks who went to Atlanta for the conference championship game rather than Georgia. South Carolina finished 5-0 in divisional play, while Georgia went 4-1, with that one loss coincidentally to the Gamecocks. As Spurrier pointed out, the only difference between the two team’s schedules was that Georgia played Ole Miss, and that South Carolina was stuck visiting Arkansas. In other words, the Bulldogs were rewarded, by playing easier competition.

Let’s look back at last year for example. As Spurrier mentioned, Georgia went ahead and rode the SEC’s easiest schedule to 10 wins, an East championship and a trip to the Georgia Dome. Sure the East was down, but it didn’t hurt that their games against Western Division opponents included a visit from Mississippi State to Athens, a road game at Ole Miss (only the worst team in the conference), and their annual rivalry game with Auburn. By sheer luck, those happened to be the three worst teams in the West last season, and not coincidentally it led to the Dawgs winning the East.

Now let’s flip the script, and talk about Tennessee. It’s no secret that Derek Dooley is on the hot seat this spring, in large part because of last year’s 5-7 record, and a season that ended without a bowl appearance. And while Dooley obviously didn’t help his cause by losing to Kentucky in the season-finale (which in some eyes, was a fireable offense as it was), it also didn’t help that Tennessee was stuck with a schedule that included all three SEC West superpowers last year. Trips to Arkansas and Alabama and a visit by LSU to Tennessee did as much to torpedo the Vols season as anything else.

Whether Spurrier’s proposal will have any impact or not, well, it’s tough to say.

At the same time, the Old Ball Coach once again at least gave us something to think about.

And to his credit, he was even wearing a shirt when he said it. We think.