1. Football junkies know Chris Brown as the pigskin savant behind the brilliant strategy site Smart Football and a columnist for Grantland. He added author to his lengthy resume last month with the release of The Essential Smart Football, a compendium of his greatest hits.

(Full disclosure: I consider Chris a friend and was provided a complimentary copy of the book prior to its release. I interviewed him about the book last month.)

I finally finished the book this weekend, and it didn’t disappoint. Brown has a knack for distilling complex football schemes and strategies down to their core. The chapter on the New England Patriots defense under Bill Belichick, for example, breaks down how Vince Wilfork truly makes the Pats’ hybrid scheme work. Likewise, the section on Urban Meyer’s offense deftly illustrates how Ohio St.’s coach has appropriated offensive schemes that have been around since the dawn of time to get the upper hand on opposing defenses.

And that’s where The Essential Smart Football really soars. For all the insight that can be gained from Brown’s work about what’s going on down on the field on Saturdays and Sundays in the fall, he’s really something of a football archaeologist. Brown emphasizes how modern-day football strategists have seen farther by standing on the shoulders of the giants in coaching who came before them. The result is a book that’s equal parts analytical and historical in its view of today’s game, both of which Brown handles superbly.

2. To the surprise of absolutely no one, Jerry Sandusky is going to prison for the rest of his life. The fact that the jury only needed two days to deliberate and convict Sandusky on 45 counts of sexual abuse speaks to the overwhelming mountain of evidence against him. It’s not a stretch to say he will go down as one of history’s true monsters.

The guilt and shame of those who could have stopped Sandusky will undoubtedly stay with them for the rest of their lives. That group includes iconic coach Joe Paterno, whose legacy will be forever linked to his former assistant coach and the questions of whether JoePa failed Sandusky’s victims.

But let’s be clear: Paterno is one of many who fell short of their responsibilities. And, ultimately, this is a story about all of them as much as the legendary coach. Paterno was a god at Penn St., but the greatest failings in this whole sordid affair resulted from his deification, not the man himself.

Sadly, the easy angle here, the one that will draw all the pageviews, is the debate over Paterno’s culpability, even after his death. I hope we don’t lose sight of the fact that this involved massive incompetence and cowardice at many levels at Penn St.

3. Predictably, the latest round of conference realignment has turned to Notre Dame, always the apple of every conference’s eye.

We’ve all seen this movie so many times before and we know how it ends. The Fightin’ Irish will end up getting everything they want, including flexibility and money.

It truly is amazing to me that a program that has languished for as long as ND can continue to command so much influence over the entire sport. More power to ’em. 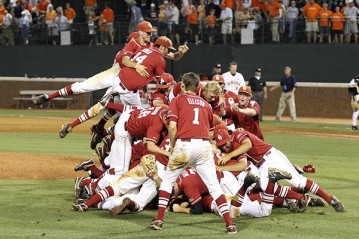 4. This time of year, my Twitter timeline invariably fills up with talk of the College World Series. It really seems like a cool event, and I can remember how much fun I had back in the day watching Oklahoma win the whole shebang.

Honestly, though, I just can’t get into it.

5. Euro 2012 is a different story. My real life prevents me from watching as much live action as I’d like, but I do love what I do get to see.

Aside from being just such a magnificent game to watch, the enthusiasm and passion surrounding soccer, especially on an international stage such as this can’t, makes for such compelling viewing.

As Grant Wahl noted in this week’s edition of Sports Illustrated, good luck replicating that in American pro sports.

6. I had a chance to catch a movie this weekend for the first time in forever and went to see… Absolutely nothing. Thought about seeing the Stringer Bell space flick, but just couldn’t muster up the motivation.

7. Speaking of String, you can definitely count me among the number who believe “The Wire” is the greatest show in the history of television. Hell, it very may well be the greatest piece of media ever created, period.

If you’re a fan of the show, check out Jason Whitlock’s latest podcast with its creator, David Simon. Simon actually came off far less cantankerous than I expected, although he probably needed a cigarette when Whitlock was through with him.

8. And speaking of podcasts, Pete Sonski graciously invited me to appear on his show “Three Point Stance” on Saturday night to discuss the latest conference chicanery. Give it a listen.

9. Drew Magary’s takedown of this piece of garbage from the New York Times Style section might have been the best thing I read last week. The part about the difference between a “job” and “chores” is hilarious.

I hope Magary never gets me in his sights.

10. Having crowned the USC Trojans last week as CBR’s preseason No. 1 team, we’re moving on to our conference previews this week. We’re kicking things off with the league where Clemson reigns as the defending champ and Florida St. is looking to return to the top of the college football world. Make sure to check back early and often all week as we break down the upcoming season in the ACC.