I received a stunning number of non-inquiries into my absence from the writing scene last week. Sorry, folks, but every guy needs a vacation.

The good news for you is that I'm back now, rested and refreshed. Time to get cracking and start this week off right.

1. A buddy of mine asked me the other day why we don't put something up on the site like an official CBR "countdown to kickoff" or something. Fair question, because don't all of our lives get infinitely better when there's real college football to watch?

Obviously, I wouldn't be sitting here typing this right now if I didn't love football. I used to play up that shtick, but I had an epiphany at some point in the last couple years. Truthfully, that whole bag about "my life is empty without football" is just kinda pathetic. Yeah, football season is great and all, but, like, I have a life. I'm not going to waste the limited number of minutes that I have to live counting them in anticipation of the start of football season.

2. All that being said, there's not denying that we're quickly approaching an important milestone in the college football offseason.

The calendar flips to August this week, which means players begin reporting for duty across campuses nationwide. It means the start of grueling two-a-day practice sessions in brutal heat that doughy couch potatoes can't even begin to contemplate. It means our first glimpses of shiny new rookies and rumored workout warriors from the summer.

And, yes, the start of the season really is that close now. You have my permission to get excited.

3. In light of my vacation, I didn't really write anything last week about the NCAA sanctioning Penn St. I feel kind of fortunate, because it seems like it has taken me this long just to process the whole thing.

(Confession: My original intent was for this entire column to be about PSU, but I thought better of it. I can imagine something like "10 thoughts on the Penn St. situation" is exactly how everyone reading this wants to start the week off.)

I could honestly write a dissertation on this whole situation at this point, but I'll spare you and try to cut to the chase.

The Penn St. community's reverence for the football program, particularly that which they expressed with their wallets, ultimately gave Joe Paterno the power that he had on that campus. It also provided the incentive for the university's administrators to look the other way while Jerry Sandusky used the school as an apparatus to rape young boys.

If football holds that much sway over a school's culture to the point that it can so severely pervert the decision-making of its leaders, PSU needs to get away from the sport for a bit. A football 12-step program, if you will. 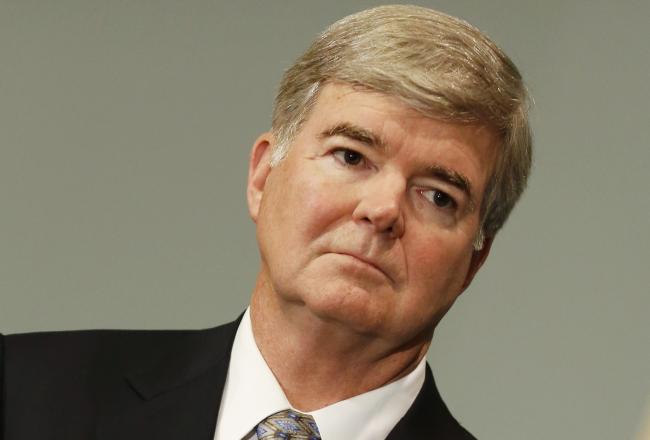 4. My hope was that the university would decide to shut the program down voluntarily for a couple years. Apparently, that wasn't in the cards.

Failing that, I would've preferred to see the federal and state governments put the program down. For now, though, we've got the NCAA's "coma penalty" for the program.

Any portrayal of NCAA President Mark Emmert as wearing a white hat in this whole sordid affair is bullshit. Pulling scholarships and bowl bans, even a $60 million fine, as punishment for what happened with that program strikes me as almost offensive on some level. What's more, the sham of amateurism upheld by the NCAA perpetuates the lucrative "football culture" at schools like Penn St. (and Alabama and Texas and Ohio St. and on and on.)

The Association hypocritically overstepped its bounds, no question. However, I'm still having a hard time mustering up a ton of outrage over the NCAA's actions. Once I see evidence that someone else with actual authority intends to step up and pull the plug on the program, I'm sure I'll look at this differently. Until then, I guess I'm alright with the ends justifying the means, although I don't think the NCAA even went far enough.

5. And speaking of offensive, commissioner Jim Delany, who piled on Penn St. with his own set of penalties, last week dropped some true horseshit about the scandal during Big Ten Media Days. Delany pulled out the well-worn cliche that it's sometimes "darkest before the dawn" in reference to PSU's future.

Is "every cloud has a silver lining" not swag enough for you, Jim?

My real objection isn't with Delany's turn of phrase so much as that he'd have the audacity to paint this as some kind of redemption story in State College. Please.

OK, I've got to stop talking about this.

6. Gunner Kiel didn't have the chest to play quarterback at LSU, but Rob Bolden does?

7. In another case of comings and goings, looks like Michael Dyer has been tossed from Arkansas St. almost as soon as he got there. You may remember Dyer as the MVP of the 2011 BCS title game.

As our own Michael Felder hinted during a recent appearance on the podcast "Friends With Muscles" (good show, by the way), what were the chances that we would have actually seen Dyer in a Red Wolves uniform at any point in his life? NFL scouts already have plenty of tape on him, and it's not like he's getting any taller.

8. Listening to Pat Fitzgerald's interview with Bill King from Big Ten Media Days reminded me why Northwestern's coach is one of my favorites in the entire sport. Really dynamic guy whose players seem to love playing for him.

Coaching at a place like NU brings some built-in challenges that will keep it from ever really becoming a national powerhouse. As an alum, though, Fitzgerald clearly appreciates the school for what it is, and I'd assume he can coach there so long as he pleases.

I'm sure we'll continue to hear his name come up for more prestigious job openings, but I don't know how he'd ever find a better fit than what he has with the Wildcats.

9. So there's some 7-on-7 on ESPNU right now as I'm writing this. Unwatchable.

10. Finally caught The Dark Knight Rises over the weekend. Superb, and that is coming from a decidedly anti-comic book guy. Can't even complain about the pacing, even though the film checked in at nearly three hours.

Honestly, I'm hard-pressed to name a better trilogy than Christopher Nolan's Batman reboot. That includes The Godfather, which ended on a completely sour note.