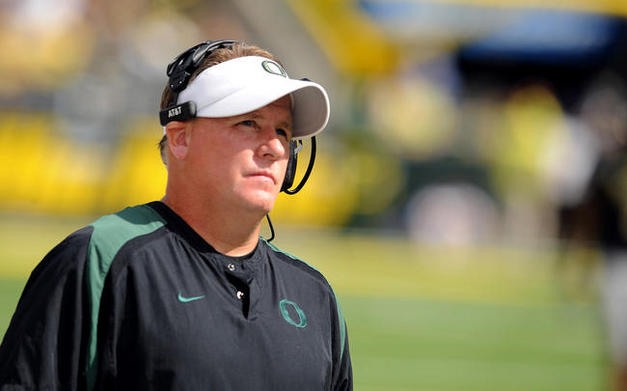 There are wild rumors, there are really wild rumors, and then, there’s what’s happening in Tampa Bay as we speak. That’s because as the 49ers and Giants do battle for the right to play in the Super Bowl right now, the Tampa Bay Buccaneers hope they’ve found the man that will someday get them back to the NFL’s Promised Land.

That man? Oregon coach Chip Kelly. What started as internet rumors are picking up heavy steam late Sunday night, with news outlets in both Tampa and Oregon confirming the mutual courtship.

News first leaked out of Oregon, where KWG TV’s Michael Berk put out the following report just an hour ago:

University of Oregon football coach Chip Kelly is close to signing a deal with the NFL, a source told KGW Sunday..

Kelly is reportedly in the process of finalizing a deal that would make him the head coach of the Tampa Bay Buccaneers.

A source close to the situation told KGW Kelly will make the jump to the NFL if he can come to terms on a contract.

And now, the St. Petersburg Times’ Rick Stroud is reporting similar rumblings in Tampa. This, from his Twitter account:

So there you have it. If Kelly-to-Tampa isn’t a done deal, it does seem like it very well could be soon enough. Nothing is final yet, but if reports are true, it could be by Tuesday or Wednesday.

To put this all into some kind of context, let’s start from the college perspective, and simply say that if Kelly is leaving Eugene, he’s doing it as one of the legitimate rising stars in the business. As hard as it is to believe, Kelly was the offensive coordinator at New Hampshire just six years ago, and was named head coach at Oregon only three winters ago. At the time of his hiring, it was his first head coaching gig at any level.

But since that fateful day when he moved to the head coach’s office, all Kelly has done is win, and win big. He’s got three straight Pac-12 titles, and 34 wins overall in three years, including a 2010 season which ended with a trip to the BCS National Championship Game. In the process he’s been best known for the fast-paced offense that he more or less invented at New Hampshire, and brought with him to the West Coast. That unit has produced a Top 10 scoring offense every year Kelly has been in town, including a 2010 season where the Ducks led the country in scoring.

And with that, the bigger question would be if that offense could work in the NFL. It’s quite impossible to say, since not only has no one succeeded with an offense similar to Kelly’s, nobody has ever even tried it. But while pretty much everything Kelly touched has turned to gold at the college level, it’s really tough to see NFL successes coming as quickly, if at all. With all due respect to what Kelly has done in Eugene, the defenses in Pullman, Corvallis and Tempe aren’t quite the same as even the worst in the NFL. Not to mention that it would take time for Kelly to get players who fit his scheme into the mold. Specifically, quarterback Josh Freeman doesn’t seem to have the skills to thrive under Kelly’s watch.

Beyond that, there are some other peripheral things to consider here as well, mainly a continuing NCAA investigation into Kelly, the Oregon football program, and the role that former talent scout Willie Lyles may have been in helping get some players to campus. While the ongoing NCAA investigation isn’t expected to yield major NCAA violations, you never know what Kelly may be hearing behind the scenes, or at least thinking.

For now though, Kelly is still the coach at Oregon.

That could be changing very soon however.