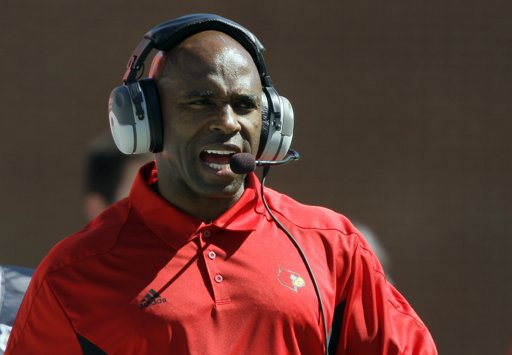 Had things turned out a bit differently, Friday night’s matchup been Cincinnati and Louisville could’ve been for all the Tostitos. Or oranges. Or whatever the hell the Big East champion is playing for these days. Either way, Cincinnati-Louisville had potential to be a big one. You know, until the Bearcats went out and got upset last Saturday night at Toledo. Now, a matchup between two unranked teams has lost a bit of its luster.

But not all that much, since as disappointing as Saturday night’s loss was, Cincinnati now has the opportunity to pull off an upset of their own when they visit Papa John’s Stadium on Friday night. Louisville is undefeated, but they’ve hardly been untested, with a couple of wins recently which were probably too close for Charlie Strong’s comfort.

So with upset potential brewing in Louisville Friday night, here’s what you need to know heading into this big, Big East showdown!

For Cincinnati to Win: They can’t let quarterback Munchie Legaux beat them. That might sound crass, since Legaux plays for Cincinnati and not Louisville, but based on his recent play, it is a fair assessment.

That’s because through the Bearcats first six games of the season Legaux has struggled, but it wasn’t until this past Saturday it finally cost them. On the evening Legaux was abysmal, completing just 41 percent of his passes, with two interceptions and a touchdown thrown. The problem is, Legaux hadn’t been much better prior to that this season, with a meager 53 percent completion percentage on all passes thrown in 2012.

Simply put, Cincinnati has been winning despite Legaux, not because of him. He better pick up on Friday night against a Louisville defense which is only allowing 21.9 points per game this season.

For Louisville to Win: The Cardinals need to learn how to close out wins. It’s something that plagued them since the beginning of the season when they nearly blew a 29-point halftime lead against North Carolina, and something which almost cost the Cards again last week when Louisville gave up 22 second half points against South Florida, barely holding on to win 27-25.

Now in Louisville’s defense, there are a few things to consider here. The first is that despite their struggles, Louisville has still won these games; there are a lot of teams which would love to be 7-0 right now, regardless of how they got there. More importantly, it truly is a sign of the times with Louisville, which is still one of the youngest teams in FBS football.

Still, at home, undefeated and with an inside track to a BCS bowl game, no one will be making excuses for the Cardinals if they can’t pull out the win here.

Key Player, Cincinnati: With Legaux’s struggles well chronicled above, it will only put more pressure on running back George Winn. Thankfully for Bearcats fans, the senior should be up for the challenge.

As things stand, Winn could very well be the best back most college football fans know nothing about. After playing in Isaiah Pead’s backup for the last few years, Winn has emerged this season, averaging six yards per carry with four touchdowns on the season. What might be even more impressive though is his consistency; Winn hasn’t rushed for less than 75 yards in any of the Bearcats’ six games this season.

With the pass game struggling, Cincinnati will need a big game from Winn and their offensive line. If the Bearcats win, look for the back to be the difference.

Key Player, Louisville: Well, it’s got to be Teddy Bridgewater, right? With all other things being relatively equal, Bridgewater (and in turn the quarterback position) is the one place where Louisville has an unequivocal edge going into Friday night.

That’s because while Legaux is struggling under center, Bridgewater is quietly having himself a monster season. On the year the sophomore from Miami is completing 73 percent of his passes, with 11 touchdowns and just three interceptions in 188 attempts. And like Winn above, what is more impressive than anything is Bridgewater’s consistency; the sophomore has thrown for at least one touchdown pass in each of the Cardinals’ last six games.

Again, Cincinnati has no one anywhere near as dynamic or skilled as Bridgewater. And if he has a big game, the Bearcats have no answer either.

Key Stat: 1-3, which is Louisville’s record against the spread the last four games.

Ultimately, does it mean anything? Not necessarily. But as we’ve been saying since the beginning, after so many close games (Louisville has won four of their last five by a touchdown or less) it does seem like Cardinals are due to get upset.

If Cincinnati has their way, it’ll be this Friday night.