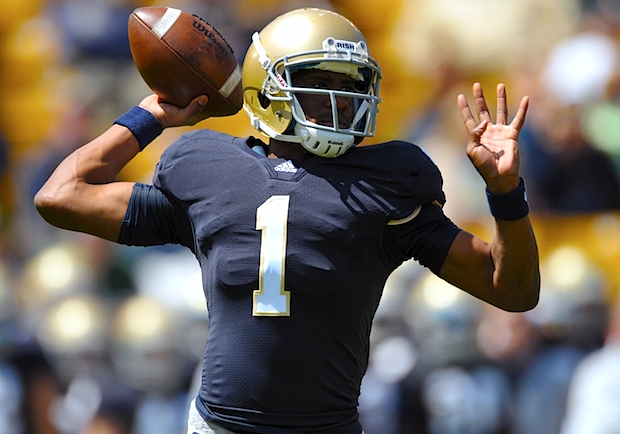 Brian Kelly will take his chances with the quarterback who can make plays. The Notre Dame coach will name sophomore Everett Golson as his quarterback when the Fighting Irish line up against Navy in Dublin on September 1st.

Keith Arnold of NBCSports.com broke the news early Thursday, and Brian Hamilton of the Chicago Tribune confirmed it.

The choice of the six-foot, 185-pound South Carolinian, the only one of the four Irish quarterbacks who did not take a live snap in a game at some level last season, is captivating. It is also the proper call. On a squad where the most experienced quarterback, Tommy Rees, committed 19 turnovers in 2011 (you may recall a few of them, and if you don’t, that Notre Dame alum still lying in a fetal position in the corner will refresh your memory), why not roll the dice with the quarterback who has the most potential to make plays?

On a sun-dappled afternoon last April, Golson was particularly impressive in Notre Dame’s spring game. He completed 11 of 15 passes, two for touchdowns, and rushed for 25 yards. The only blight on his day was two fumbles.

“Some of the things he does, he’s just naturally gifted,” Irish offensive coordinator Chuck Martin told the Chicago Tribune earlier this week. “So he never really has had to take time to be a student of the game.”

In that same Trib story Golson, a talented pianist, revealed to author Brian Hamilton that (METAPHOR ALERT) that he cannot read music.

After the robotic efforts of Rees –to his credit, he is 12-4 as a starter as an underclassman, the Irish could stand to see a virtuoso in the pocket. When Rees dropped back to pass, there was almost no chance he would ever tuck the ball and run. With Golson, every play will be worth watching – particularly the ones that break down.

A few items worth noting as it pertains to the six-foot, 185-pounder from Myrtle Beach:

1.    The last time Notre Dame started a quarterback from South Carolina in its season opener, it won the national championship (that’s an item, not an omen; the schedule is far too difficult this season).

3.    What is the benefit of naming Golson the starter a full nine days before the kickoff with Navy? To remove any whiff of diffidence from the players and coaching staff. In 2007 Charlie Weis had the Jimmy Clausen-Demetrius Jones race go down to the final day or two. When Jones was named the starter, there was little confidence behind it. No Irish QB stood a chance with that offense in ’07, so it was even worse when Weis pulled Jones before halftime. He went AWOL less than two weeks later and, in an odd twist of fate, eventually wound up as a linebacker at Cincinnati…where the coach at the time was Brian Kelly.