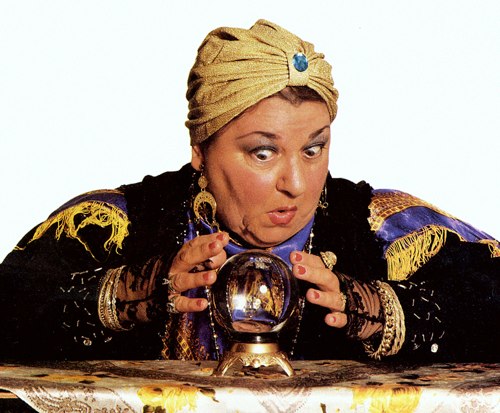 Here at Crystal Ball Run, we’re one big, happy family. When one guy is down, another picks him up. When someone has writers block, one of his colleagues will take him to the white board, review the tape, and work with him until his head’s right. And when— well, you get the point.

And never was our teamwork on better display than last week.

You see, here at Crystal Ball Run headquarters (located somewhere between Atlanta and the deep recesses of Will Muschamp’s soul), we have this old crystal ball. It’s a real crystal ball, one with mystical powers, that in the past has given us winners for the biggest games each and every week (As you can imagine, the crystal ball has made us a huge hit with the ladies, but not so popular with the folks in Vegas. Think of Matthew McConaughey in ‘Two For The Money’ and you’ve basically got Allen Kenney during the 2010 season).

Unfortunately, until last week, we had no idea where the actual crystal ball was. Thankfully my colleague Ty Hildenbrandt found it up in the attic (next to a life sized poster of Jared Lorenzen, ironically), and the crystal ball did what it always does, gazing into the future and spitting out winners for Week 1 of the 2012 college football season. Ty was nice enough to document them for us here.

Well, as it turns out the crystal ball wasn’t done, and has once again summoned us. This time, it’s giving us winners for the biggest games in Week 2, including a surprise in the SEC.

But first, let’s start with…

When we last saw these programs on the field, each was suffering from a case of the post-holiday blues. If memory serves me correct, Washington gave up roughly 147 points and 2,575 yards of total offense against Baylor in the Alamo Bowl (after looking them up, the actual numbers were “only” 66 points and 777 total yards), and LSU was getting a NOLA-style beat down courtesy of their SEC West rivals Alabama.

Thankfully though, with a new season brings new hope. Washington overhauled its defensive staff and brought Justin Wilcox back to the West Coast to replace Nick Holt as defensive coordinator, and LSU, well, they’re looking a lot like every other LSU team of the last decade. Les Miles’ crew just so happens to return 11 starters and a bunch more contributors off last year’s team, one that had one of the greatest regular season runs in college football history before running into the Crimson Tide express in New Orleans.

As for the game on the field September 8, well, the crystal ball is telling us to hide the women and children. It’s going to get UG-LY.

Starting with Wilcox, we love the guy, but man is he working against a stacked deck. Not only was the defense he inherited bad last year, but they return little upfront that will be able to help in their trip to the Bayou in 2012. The Huskies return just one starter along the defensive line, and in Week 2 will face an LSU squad which returns four starting offensive linemen, and four running backs that scored at least seven touchdowns last year. In other words, LSU will be able to run the ball as often, and for as many yards as they please.

While the big story here for LSU will be new quarterback Zach Mettenberger getting his first real test center, the truth is much simpler: Mettenberger might not have to throw a single pass the entire second half.

Next, we head out West, where the single most exciting storyline of Nebraska at UCLA might not have to do with the action on the field, but instead, the coaches on the sidelines. Vegas has already set the line on “Pelini vs. Mora” at over/under 4.5 popped blood vessels and 1.5 minor heart attacks. Frankly, we’ve already placed a substantial wager on the “over” for each.

As for the actual football action, well, it’ll be interesting to see where Mora has this program just two weeks into the season. UCLA seems set at quarterback with Brett Hundley, and with Johnathan Franklin returning at running back it seems like the Bruins could actually put together a semi-potent offense this fall. Well, a semi-potent offense that is, if the offensive line decides to block, an act which they’ve been largely disinterested in of late. A big reason why back-up quarterbacks Richard Brehaut and Kevin Prince have spent more time in the cold tub than in the huddle these past few seasons is because of abysmal protection up front.

And unfortunately, that line play could be the difference in the Rose Bowl on the second Saturday in September. While we love what Mora has done in Westwood so far, the simple truth is that- like Wilcox and Washington- he’s bringing a knife at a gunfight against Nebraska’s talented defensive front. Jared Crick might be gone, but Cameron Meredith and the rest of the guys up front should do enough to slow down UCLA.

UCLA is on their way, but they’re not there yet.

Although the storyline here is “Welcome to the SEC, Missouri” the subtext of the story is actually… Steve Spurrier?

That’s right, the Old Ball Coach inadvertently gave America a preview for this game when he jokingly took a cheap shot at Georgia a couple weeks ago, saying:

I don’t know. I sort of always liked playing them that second game because you could always count on them having two or three key players suspended.

As much as we found Spurrier’s words entertaining at the time, there was a twinge of truth to them. When Georgia takes the field in Week 2 this year (in Columbia, MO, not Columbia, SC, ironically), there’s a reasonable chance that the Dawgs will be without defensive starters Bacarri Rambo, Sanders Cummings and Alec Ogletree. That’s definitely not a good look if you’re a Dawgs fan.

Despite it all though, we’re still picking Georgia.

While some folks like Missouri a lot heading into the season (I’m not necessarily one of them), the simple truth is that it’s going to take some time for the Tigers to adjust to all things SEC, and asking them to come out, and get a win against the defending East champs is going to be tough. As long as Aaron Murray is on the field, and as long as he’s got Tavarres King and Malcolm Mitchell to throw to, this offense will be ok. And on defense, as long as Jarvis Jones is on the field, well, not only do we fear for James Franklin’s safety, but we believe Georgia will be able to slow down the Tigers spread attack.

Missouri is a quality team, and will pull an upset or two in year one in the SEC. The first one just isn’t coming against Georgia.

A couple miles South of Missouri, the second “Welcome to the SEC” game of the day will be played, when Will Muschamp’s Florida Gators travel to Kyle Field to take on the new look Texas A&M Aggies. And if you’re looking for excitement, well, this one’s already got it. Have you heard about the lame war of words between Muschamp and Kevin Sumlin?!? It’s been truly, fantastically, awful… hopefully not an indicator of what’s to come for these teams this year.

On the field this one will provide a fascinating contrast in styles. We already know what Florida wants to do; in essence they’re looking to play killer defense, stuff the ball down your throat with the run game, and in a best case scenario, maybe even complete a pass or two (we’ll believe the third one when we see it). As for A&M, it’s the exact opposite. It’s no secret that Kevin Sumlin wants to score, and score in bunches, ideally with the passing game.

And at least in Week 1, we do believe that Sumlin will be able to conjure up enough offense to pull the upset.

Look, we— ahem, our crystal ball— aren’t saying that Texas A&M is a better team than Florida, but they do have the better set of circumstances going in this one. They are at home, in front of what will be an emotional crowd, as Florida still tries to figure out what the hell they’re doing offensively. Pease will get things going eventually, but to ask two true sophomore quarterbacks (who’ve never won a road game between them) to go into Kyle Field and get a W is a might tall task to ask. Not to mention that you just know Sumlin will have something up his sleeve here. With the bright lights on, this could be a signature win for his program.

Florida’s defense will keep them in this one, but unless that defense can produce points themselves we suspect that the Aggies will pull the upset.

Other games to watch: Miami at Kansas State; Auburn at Mississippi State; Penn State at Virginia