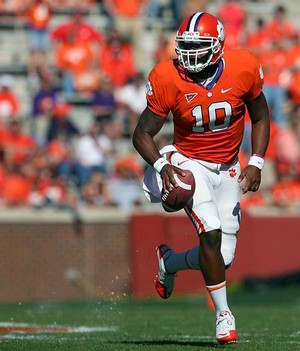 What makes up a Heisman Trophy contender? Looking  at just the past five winners (Tim Tebow, Sam Bradford, Mark Ingram, Cam Newton and Robert Griffin), it seems quarterback is the best option. In fact, in the past ten years, a quarterback has won it eight times.

Of those four quarterback winners, three were  running threats, with Sam Bradford being the slowest of the bunch yet still rushing for 5 touchdowns his winning season. Finally, the last three winners were coming off of either lackluster or non-existent previous seasons.

So, looking for an athletic quarterback who flashed greatness but has yet to hit his peak?  Heisman voters/fans, meet Clemson’s Tajh Boyd. And NFL scouts, get to know him too, because he could be this year’s surprisingly improved quarterback like Robert Griffin and Cam Newton were the past two years.

Boyd may not be firmly on the national scene as one of college football’s top quarterbacks, but Boyd certainly fit that mold out of high school. A consensus Top 60 overall player and Top 5 prep quarterback. The two time state champion finished with a 43-2 record, including playing with a torn ACL throughout his senior year championship run.

That experience in both high pressure situations and without being mobile could prove crucial to both his redshirt junior season as well as his pro potential. For being a first year starter after a situational 2010 season behind Kyle Parker, Boyd really thrived in Chad Morris’s balanced yet productive offense. A 3800+ yard season with 33 touchdowns and only 12 interceptions, Boyd consistently brought big plays to the offense…with his arm. he had 50 20+ yard completions last year, which accounted for 10% of his passes.

Boyd certainly has the athleticism and speed-power combo in the open field to pick up plays with his feet. Looking at the stat line, it may tell you otherwise (just 218 yards and 5 touchdowns rushing), but those numbers are actually a very encouraging number for Boyd’s pro potential. He’s shown the ability to be patient with his receivers routes downfield and after the initial pocket breaks down. He showed an improved ability to keep his eyes downfield over the course of his first starting season, much of which likely has to do with the offense Chad Morris instituted.

Morris’s offense includes a balanced run-pass style that really forces defense to contain the outside in the run game as well as the short and deep area passing game. Defenses are forced to be patient at the second level, fast and athletic on the outside, and patrol the passing game from the hash marks out to protect against big plays after the catch. That concentration on the outside allows for downfield inside passing routes, routes that take pocket presence, touch between zones, and pinpoint accuracy when the openings do occur. Boyd has maximized all of that.

Boyd’s timing, consistently tight ball, and velocity control on the short and mid-range routes stood out most in his development and ability to make throws that set up his receivers for success. Though he doesn’t have ideal footwork which makes his passes sail at times and his mid-range accuracy across the field isn’t as consistent as he’d like, he certainly flashes that ability to develop there.

Helping Boyd in that development is a host of fantastic talent. Andre Ellington has wheels to set the edge on the outside as well as consistently taking advantage of holes on the inside, having a career 5.8 yards per carry average. At receiver, Sammy Watkins gets much of the attention, as he should being just the 4th player in college football history to be a first team All-American as a freshman, but DeAndre Hopkins was the main option before Watkins arrived at Clemson and has NFL prospects as well. Along with his weapons on the offense, his center Dalton Freeman returns for his fourth year as a starter to control a changing offensive line.

With weapons on the outside, a running game that will maintain the balance Chad Morris wants, and the signs of development over the course of his first starting season, Tajh Boyd is set up for success for his redshirt junior season at Clemson.

An opening game against the Tigers of Auburn, battling at Florida State with EJ Manuel, and taking on Logan Thomas of Virginia Tech and Marcus Lattimore of South Carolina at Clemson this year, there will be no shortage of pressure games for Boyd this season. But Boyd won 43 games in high school. He won two state championships, including one on a torn ACL. He improved over the course of his first starting season in the ACC with a young offense and a new coordinator. And he has the underrated polish as a pocket passer with room to improve fundamentally.

It’s on Boyd now if he’ll take that next step into Heisman consideration and NFL quarterback level. Possible? Certainly. A long shot? Maybe. But so were Mark Ingram, Cam Newton, and Robert Griffin. Boyd could look to follow in their footsteps this season.