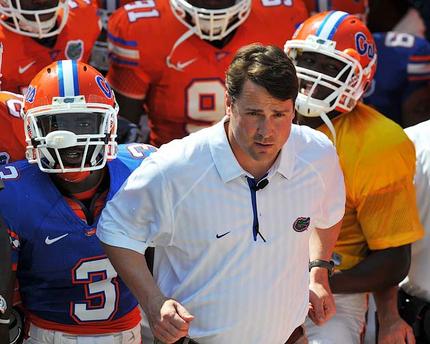 The first week of any college football season is usually marked by a few befuddling games where highly touted teams turn in lousy performances that leave everyone asking if they were shaking off the rust or showing signs of more trouble ahead. This year was no different, with teams such as Wisconsin, Oklahoma and Stanford struggling with seemingly overmatched opponents.

Based on what you saw in Week One, who actually has reason for alarm this year? Who are you putting on notice?

Aaron Torres: If you're asking what I noticed, it's that Florida stinks. A lot. And as I've been saying all off-season, I'd be stunned if they sniff anything more than six or seven wins.

Now, did they show signs that maybe, possibly in some alternative world they could be respectable Saturday? I suppose. Mike Gillislee was about as good as advertised, and Jeff Driskel actually did show improvement over the course of 60 minutes. I'll give him that.

At the same, beyond those two, I saw little from the offense that made me believe they're going to score points against pretty much anyone in the SEC. Even more concerning, the defense – the calling card that was going to hold this team together all season – didn't seem quite as invincible as I expected. Bowling Green put up 327 yards of offense, about 40 or so less than the Gators.

Simply put, the final score tells us that this one was a comfortable Florida win. Watching it with my own two eyes told me something different all together.

It's going to be a long season for the Gators.

Andrew Coppens: I think the team that should be most on "on notice" is Michigan State. Without their defense they don't beat Boise State. Come Big Ten season they'll need more than just Le'Veon Bell on offense to win.

Sure Wisconsin didn't put away a lesser opponent in Northern Iowa, but I'm far more confident in their offense and in Danny O'Brien than I am in Andre Maxwell come conference play.

The other team that should really be worried is Florida. That team is going to getting beat seven ways to Saturday every week in SEC play if you ask me. That performance against Bowling Green was just god awful & they clearly don't have a single QB worth their scholarship on that roster.

My how the once mighty Gators have fallen, huh?

Kevin McGuire: I'm going to believe that Wisconsin and Michigan State will be fine offensively by the time the Big Ten schedule opens up, so I'm not overly concerned about either at this point. I will say that the team I think needs to be put on notice though is Virginia Tech.

Some were saying heading in to the opening weekend that this was a make or break year for the Hokies. I get it, with Logan Thomas and coming off an ACC Championship Game appearance last season and the way the Hokies came up small in the biggest games. But other than winning the Coastal Division, what exactly are the expectations for this program, realistically?

Maybe the program doesn't need to be put on watch, but maybe the fans who think Virginia Tech is made for a serious run.

Allen Kenney: There's no shame in losing to a team that appears to be as good as Alabama is at the moment. Still, everything I saw from Michigan Saturday night confirmed my skepticism about the Wolverines coming into the season.

Plenty of pundits and pollsters were hyping the Maize and Blue in the build-up to this year, but the idea of UM as the No. 8 team in the country, which was the Wolverines' preseason ranking, was silly. Michigan didn't see anything remotely resembling a team of the Crimson Tide's caliber in its 11-2 season of a year ago, which was marked by a whole slew of fortunate bounces in Ann Arbor.

Getting to conference play will probably help cure what ails the Wolverines, but this team's national title hopes have been dashed, and I doubt they make a serious run at the Big Ten in light of what we saw versus 'Bama.