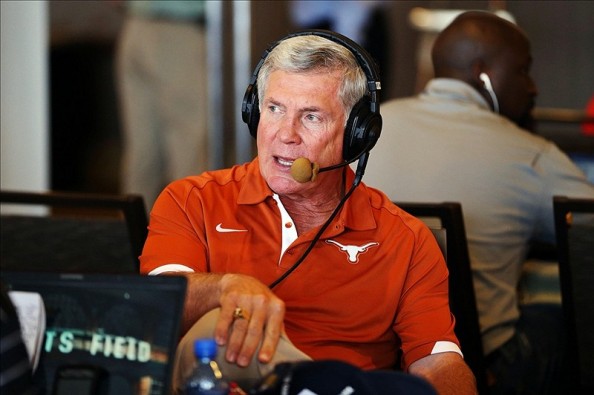 This week Texas coach Mack Brown gave the strongest voice yet to his concerns about the Longhorn Network interfering with his team. Brown contends that the LHN gives away state secrets to the opposition and takes up too much of his time with filming three different coaches show.

Skeptics might dismiss Brown's complaints as an embattled coach trying to save his own skin, but few coaches would welcome the idea of cameras have that much access to their practices, and most approach their own TV shows the way Aaron Torres would an invitation to dinner at Randy Edsall's house.

Do you buy that the LHN is holding the Longhorns back? On balance, is it a bigger advantage than disadvantage? Theoretically, is the pain worth the gain?

Michael Felder: Haha, saw that. Mack Brown can get the entire fuck out of my face with that bullshit.

Andy Coppens: How is it not an advantage? You have a network dedicated to ONE team available in all parts of the country. That's the biggest recruiting advantage I've ever seen.

Add in the ability to earn some $15 million every year of the deal and you've set yourself up for well into the future for not only your football team, but the rest of your athletic department as a whole.

Maybe it's a pain in Mack Brown's rear end from time to time, but I'm sure the swim/dive team, the baseball team, and much more love the ability to have their teams play on a television network.

To me it's not just about football for this network, despite that being the driving force. Brown's just being a cranky old man and needs to shut up if you ask me.

Aaron Torres: First of all, I resent that Randy Edsall comment. The truth is that I would take up an invitation to have dinner at Randy Edsall's house any time, if only because within a year Randy is going to be unemployed and living out of his car. This might be the last chance I get to take him up on the offer.

While I don't think the Longhorn Network is a disadvantage, the one thing I'd add, is that I don't think it's as BIG of an advantage as many people think. We mention the money, but Texas has always had a ton of money. We mention the recruiting advantage, except is it really? Texas was recruiting just fine in Texas before the network ever came about, and that recruiting doesn't seem to have dropped off. Not to mention, it's not like kids in Texas didn't know who Mack Brown was before the implementation of the Longhorn Network, or that Texas ever suffered from a lack of exposure.

And as far as any type of fringe national recruiting benefits from the network, umm, what are the benefits to a network nobody is able to watch? In all seriousness, name me five people you know outside the state of Texas who actually have been able to consume the Longhorn Network's programming. I know a lot of people and can't name five. So is it really an advantage in Florida, California, Montana or New Mexico when no one gets the damn network? Not to mention it's like I said before, has any college recruit ever said, "Oh hey, I caught that Mack Brown guy on 'Texas After Dark' on the Longhorn Network. He seems like a swell guy! I think I'll commit to Texas because of it." Of course not.

Point being that after two years on air, I really do think the concept of the Longhorn Network is actually a much bigger deal than the TV station itself at this point.

Now if you'll excuse me, I've got some food that needs some prepping for this dinner party I'm attending tonight.

Tom Perry: Because of the egos of these coaches it is almost impossible for any of them to ever admit that there might be something they are doing wrong. Mack Brown is no different and since things aren't going as well as he thought they would, of course the Longhorn Network is now a nuisance. If Texas was undefeated right now he'd be more than happy to do three different coaches shows and let the cameras run 24 hours a day in the locker room (of course there would be a pay wall to get access to that content).

The Longhorns are 94th in passing defense at 256 yards per game, worse than UMass (who is transition to the FBS this season) and Akron (a perennial bottom dweller in the Mid-American Conference).

People aren't learning anything from watching practice; all they have to do is watch the game film and they'll learn plenty. Anyone who knows anything about football understands that.

The Longhorn Network taking up too much time and giving away state secrets isn't an issue; that's a smokescreen and a lazy excuse. The defense being as porous as activated charcoal is the problem.

Allen Kenney: Mack Brown and the Longhorn Network should fit together like Aaron's peaches and Randy Edsall's cream. Mack is great on TV. He embraces the CEO duties of coaching and delegating more than any of his peers – he can certainly take time out of his schedule to film his coach's shows. He's a recruiting machine, so he'd have to understand what a weapon this could provide his program in the recruiting wars.

If he can't handle the LHN, could any coach?

I do wonder if all the time commitments will be a deterrent to elite coaching candidates in the future. I suspect that a coach who isn't a control freak would see pretty quickly how he could use the LHN to his advantage, though.

The question is, do those guys even exist any more?