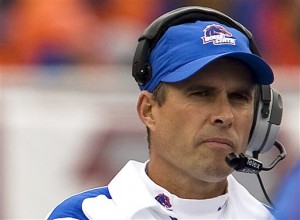 We've finally reached the first week of the season. It's filled with its usual assortment of blockbusters (Alabama-Michigan) and bombs (Florida state-Murray state).

What is the big story leading into this weekend that you will be keeping an eye on?

Allen Kenney: For me, I find this Notre Dame-Navy extravaganza in Dublin fascinating.

It presents a whole slew of logistical curveballs for both squads to deal with. Brian Kelly, for one, doesn't seem thrilled with the idea.

On top of that, it has been such an eventful offseason in South Bend. Kelly has shown hints of frustration with how the program has progressed in his first two years, and the off-the-field hoopla in 2012 probably hasn't helped. I can't wait to see if the Fighting Irish come out looking like a team moving forward or still kinda stuck in neutral.

Andy Coppens: For me it's Bama vs Michigan. Both teams ranked so high but with so many questions about who they will be on the field in 2012.

If Michigan wins it could set the tone for a season full of surprises and as writers there's nothing better than upsets galore on Saturdays in the fall.

I agree with Allen about the Notre Dame vs Navy game – it intrigues me because unlike the NFL college football isn't exactly marketed to overseas crowds.

Tom Perry: I can't wait for Thursday as the season will finally be under way. The South Carolina-Vanderbilt game isn't a blockbuster, but it's not a bad way to get things going. If you want an intriguing game not on Saturday, though, look at Boise State against Michigan State on Friday night. Both are ranked and this is the type of game that Boise has become accustomed to winning. Chris Petersen doesn't have Mr. Consistent Kellen Moore any longer, but I can't wait to see how these two teams respond.

Aaron Torres: Since Tom stole my thunder with Michigan State-Boise (a sneaky good game), I'll stay with Friday night, and head over to "The U" (wait, are the kids still calling it that?) for NC State-Tennessee. In the same way that Notre Dame-Navy has also the fascinating sociological elements in place that Allen mentioned, Tennessee-NC State has the psychological ones, especially for the Vols.

A couple things here: One, I really do believe in Tennessee, and really do believe that when all is said and done they're going to win eight or nine games this year. I also believe that regardless of whether they do or not, Derek Dooley should be no where near the hot seat. Ask any college football insider and they'll tell you that he inherited a way worse situation than anyone could've ever imagined. From lack of talent, depth and experience, to personality issues, few realize just how bad this program is when he took over.

Of course none of that matters in 2012, and all that matters is whether this team wins football games. And whether you're like me and think they'll win nine games or not, the simple truth is that there isn't a team that's more fragile nationally than the Vols are. If they were to lose here it could lead to a snowball effect that sees Dooley not only out as UT head coach by the end of the season, but with games against Florida and Georgia in September, and Mississippi State, Alabama and South Carolina in October, it wouldn't be impossible to see him looking for new work by Halloween. It doesn't help that Da'Rick Rogers decided to go and get himself suspended just days ago.

Dave Singleton: Displaying a bit of West Coast and mid-major bias, there are three games I plan on watching closely this weekend:

Boise State at Michigan State, which has been covered already in this conversation. It's a true road game this time around as opposed to the road/neutral matchups in D.C. and Atlanta. Let's see if Boise is reloading or rebuilding this year as they get ready to head to the Big East after a two year layover in the Mountain West.

Nevada at Cal, featuring a renovated Memorial Stadium. Nevada, in their first year in the Mountain West, might be the biggest obstacle to the Boise State Broncos winning the league. The Wolf Pack have the talent, and a win on the road against a PAC-12 opponent (even a middling one) could be a springboard to running the table.

Ohio at Penn State, in the first game of the Bill O'Brien era. The Nittany Lions aren't facing Akron. Ohio is a dangerous team with an experienced talent quarterback. Penn State is a team in transition because of a coaching change, attrition (current) and NCAA penalties (coming down the road).

If Ohio could pull off the upset, it could set up the Bobcats for a special season and make casual observers wonder about the future efficacy of the Penn State program.

Joe Lucia: I’m interested in the Ohio-Penn State game. Ohio is the defending MAC East champion, they return QB Tyler Tettleton, and they’re the favorites to win the MAC outright this year. This is a very good team, and they’re not going to be a pushover for Penn State, whose expectations range from “complete disaster” to “reborn program”. This game will tell us a lot about both teams, and how their seasons will play out.

For all their insight, analysis and opinion, be sure to follow the Crystal Ball Run staff on Twitter @CrystalBallRun.