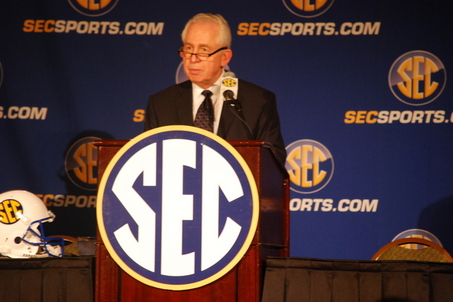 SEC fans like to think of their league as a mini-NFL. Apparently, that extends to the commissioner's office, as the conference brass have taken it upon themselves to begin issuing suspensions for what are deemed over-the-line hits.

Last week, Ole Miss defensive back Trae Elston was suspended for the Rebels' game against Texas as punishment for a play the week before in th UTEP game. This week, South Carolina safety D.J. Swearinger will be mining the pine for a shot to the head of a UAB receiver over the weekend.

Is it appropriate for Mike Slive and the conference administrators to be handing out these suspensions? Do you agree that it should be within the commissioner's discretion to do so, especially given that these weren't league games? Is it fair to the players, and should that matter?

Andy Coppens: I look at it this way: Do you trust the coaches to self-police these kinds of things? I sure as hell don't. So who do you turn to? The conference has an obligation to step in at some point, otherwise what's the purpose of having a commissioner?

Is this an ideal situation? No. But asking if it's fair to the players is a bit off base to me. What about the players injured by illegal and dangerous hits and things of that nature? That's why I think it's a good thing the commissioner is stepping up in these situations. He needs to be the one to lay down the law a bit.

The NCAA initiative about player safety is why this is happening so I credit Slive for at least being a bit proactive in this matter. Eventually, I'd love to see some other way for this to be done across the landscape, but trust the NCAA to handle this properly is almost as bad as asking the coaches to do it, oh wait, never mind it's worse!

Michael Felder: I've got a lot to say about this rule, none of it is positive.

While I am bothered that good football plays are being penalized because of "the way a hit looks" I don't think that's the most ridiculous part. Certainly people's failure to understand differences in leading with the head or targeting the head versus head contact coming by way of a good play is infuriating for me.

However, what's worse is the circle jerk of safety where people get to support this rule like they're an advocate for making the game safer. Spare me. Either you really believe all this garbage the NCAA is selling or you don't know enough about brain trauma to get to have an opinion.

This rule is in the same long standing spirit of NFL "safety measures" folks. They get to take credit for doing something while doing absolutely nothing. The failure of people who you'd think would have a clue to link subconcussive blows to linemen, running backs and linebackers is astounding. People think "devastating hits" are the safety issue; they're not. The issue is the repeated beating of the brain taken by guys on a day in and day out. That's where CTE comes from. That's where ALS comes from.

So instead of actually working to help someone, they're giving out window dressing because people fail to connect the dots. Instead of making hit sensors mandatory, they say "oh look at us we're tough on brain safety!" Instead of monitoring hit counts or screening for concussions they say "see we reviewed that hit and it looked bad on television, look at us we care!"

Yes, I'm very passionate about it because they have a platform to impact change. Instead they're merely sweeping it under the rug and a lot of people are falling for it.

Aaron Torres: Honestly, this is really just a tough concept for me to get worked about.

On the one hand, I see Andy's point; at the end of the day, if the commissioner's office feels like a violation was committed and they don't feel as though the school will take the proper stance on the subject, they've got every right to dole out a punishment as they see fit. At the same time, Mike is right too; if this really is a problem they're concerned about, suspending a player one game won't solve the problem. Better education, better safety precautions and better technology to detect the problems will.

The problem is that this isn't an issue being addressed in the off-season, but in the here and now. This isn't the time to try and figure out what the long-term solution is, or what will need to be done over the next 5-10 years to ensure it never happens again. This happened this week and if a punishment is necessary it needs to be doled out at this moment. You can't go back and retroactively suspend D.J. Swearinger in a week or in five years. If you feel he needs to sit, it needs to be now.

So I guess this is me being indecisive and toeing the line: In the end, punish the player in the short-term, while seriously addressing this long-term at the appropriate time.

Like I said, it's one game, for one player, two games for two players this entire season. It's hard for me to get fired up on the subject.

Andy Coppens: I 100% agree with what Mike has to say on this subject, I was just answering the question that was asked of us. In the end there's a lot of hypocrisy in what's happening with the whole "player safety" issue.

To me it's a lot about coaching, no one does anything about players that aren't following proper techniques these days. Yes, head injuries have always happened in this sport and others. It's a fact of playing the game unfortunately.

However, if players know that they'll be pulled for making "hot dog" hits or tackles rather than doing things the right way they'll eventually make a change. We're not going to change things over night, that's for sure, but at least this is a start down that road, no?

Allen Kenney: Obviously, I'm in favor of anything that improves player safety. To me, though, this route feels akin to a doctor treating a guy for his runny nose while he's bleeding to death.

Most recent analyses that I've come across suggest that the true toll that football takes on the brain comes more from the repeated trauma suffered during games and practices than just the "big" concussions. You could certainly argue that these suspensions offer some way to discourage neck and spinal injuries, although my decidedly non-expert opinion is that the most devastating injuries we've seen in that regard tend to come as the result of "wrong place, wrong time" more so than targeting.

I think the biggest procedural issue with the SEC's policy is the general lack of transparency as to what constitutes a "suspension-worthy" act. Even trained officials have a hard time determining in the course of play what should be flagged. It's one of the biggest judgment calls in the entire sport. Plus, I know that I struggle to disassociate the violence of a collision from determining what is a legal tackle and what isn't.

All in all, while I don't have a problem on principle with what the SEC is doing here, the whole thing feels pretty ad hoc. Furthermore, we shouldn't mistake this for some grand solution. In fact, if we're going to give Mike Slive a pat on the back for trying to stamp out dirty play, I'd also like to hear what the SEC is doing to help protect players from the more significant threats that the game poses to their long-term health.

Kevin McGuire: I do agree that it should be within the conference commissioner's power to issue suspensions to player for what are considered dirty hits, and any other such violation worthy of suspension. After all, that is what I believe the commissioner is in place for, to maintain order, ensure the game is played the right way and to enforce the conference's standards on the field. To me it does not matter where the games are played so much. If the violation in question was done by a player representing that conference, then the commissioner should have some jurisdiction regardless if the game was a conference or non-conference game. And I do not see much of an issue with whether it is fair or not to the players. They know the rules and guidelines. If they violate it, then they should also know the consequences, which could involve a suspension.

Now, that said, I don't think the commissioner should have free will to make these decisions. I think a review of the play should be done by a few official representatives of the conference to determine what punishment should be, with approval granted by the commissioner. This would hopefully cut back on reactionary punishments, which we may see form time to time after a great defensive effort results in an injury to another player despite the play actually being a clean hit. All too often the players delivering the pain are punished for doing what is within the rules. Football is a violent sport, we all know that. Injuries happen, and unfortunately sometimes those injuries occur in the head and can have a devastating effect on a player. But we should not be punishing a player for causing those injuries if they are playing by the rules.

I am all for player safety, but issuing suspensions is not necessarily the right way to go about it. Any player suspended should be able to view all evidence in the decision and dispute it accordingly, citing past examples and re-looking at game film. Maybe this already happens, but that is one way I think you can avoid any sort of dictatorship when it comes to penalties.