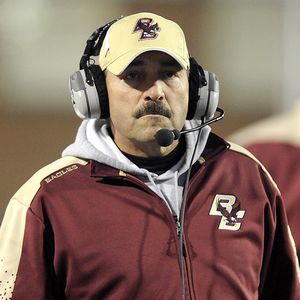 OK, guys, all week we’ve been talking about college football coaches on the hot seat. Let’s draw things to a close with this: Who is your stone-cold lock to be dismissed at the end of 2012?

Andrew Coppens: Guess I’ll kick it off this week with my stone cold lock being Frank Spaziani from Boston College. He has no answers at QB and the recruiting talent has gone downhill big time. Add in a schedule that’s not bowl-eligible-friendly and he may not make it through the season with his job.

Aaron Torres: I can’t believe I’m writing this, but to me, the answer has to be Mike Riley at Oregon State. (I can’t believe I’m writing it mainly because Oregon State was one game from the Rose Bowl as recently as 2009.) The truth is that while guys like Derek Dooley, Frank Spaziani, whomever, actually have reasons to believe their teams will be better than last year (especially Dooley), what hope does Riley have? He’ll be starting an inconsistent sophomore with little talent around him in a division where conceivably at least three teams (Washington, Washington St. and Utah) should be better than last year and in a state where your biggest rival is a college football superpower.

I can easily see Derek Dooley winning eight or nine games and keeping his job. I can see a world where Frank Spaziani gets to six and at least makes the folks at BC consider his future. But Riley? I see little reason to believe they’ll win more than the three games that they got in 2011.

Regie Eller: I simply cannot get the 42-0 run in the last 21 minutes in which the North Carolina St. Wolfpack humiliated the Maryland Terrapins in a finale befitting of such a tumultuous season out of my head. (Maryland led 41-14 before the run began.)

I am not usually a fan of firing a coach two years after being hired. In the case of Randy Edsall, though, he should have been fired after year one. (Omitting the fact that he never should have been hired.) I get why it did not happen: Maryland would still be on the hook for $2 million per year. However, when one thinks of the damage not left behind, but currently taking place in College Park by what we will call “Hurricane Edsall,” paying $2 million per to get rid of this circular, perpetual catastrophe—that does not sound too bad.

Maryland would make up the $2 million per year rather quickly with an attractive hire. You know why? Fans would actually, probably, just maybe come back to a stadium they are not currently planning on attending. I cannot blame them for avoiding such a disaster. Oh, and one last thing: That $2 million per is, obviously, contingent on Edsall sitting at home. I am sure the brilliant mind of Kevin Anderson—sans the actual hiring of Randy Edsall—would come up with a imaginative buyout for Edsall to suit his ego the size of Connecticut. (Note: It is unclear if Edsall gets cell phone reception in Connecticut today, or not.)

All this and, simply put, the kids deserve better. Student athletes—that is, mostly teenagers—under Edsall are expected to follow an unknown, imaginary, translucent set of rules. If the proof is in the pudding, the mass exodus of players who have left the Terrapin program is reason enough to bring an end to Hurricane Edsall.

Kevin McGuire: I’m going to be a little nitpicky with this question. I would be shocked if Frank Spaziani is still coaching at Boston College when we revisit this discussion a year from now, but the question is who will be dismissed at the end of the 2012 season. I happen to believe he has a better chance of receiving a pink slip before the end of the season. But, as I said, I’m taking this a little more literally than I should, perhaps.

Allen Kenney: Yes. Yes, you are.

Kevin McGuire: I am going to go with Oregon State’s Mike Riley. I do not necessarily believe he is a bad coach, but if you take a look at what is happening in the Pac-12 right now, Oregon State may feel like it is in a position where it needs to make a change on the sidelines. It’s one thing to compare your program to Oregon and what Chip Kelly is doing. It is another thing to see schools like Washington State, UCLA, Arizona and Arizona State make coaching changes and all of a sudden seem to have more to look forward to as the Pac-12 begins to expand its national presence. Sometimes that carries more weight, and if Oregon State wants to remain in the public light, the Beavers may need a bigger name coach to take over.

A convincing loss to the rival Ducks at the end of the regular season could be his last chance to save his job in Corvalis.

Michael Felder: I don’t think Maryland can afford to dump Edsall. I love the Mike Riley pick, but I’m not going to pretend to understand how the people in Corvallis think.

I love the Spaziani pick. Boston College cares about football. This is the worst that the Golden Eagles have been since, well, since I cannot even remember. They lost everything they stood for in terms of great defense, sound offense and getting to bowl games, and after giving a guy everyone liked a shot, they have been burned something fierce. Frank Spaziani is proof of why you don’t let the “good guy” take over your program. That “company man” has done damage that Larry Coker looks at and thinks, “Sheesh, what were you doing up there?”

He’s gone. There is no way BC gets over five or so wins, and the team has only one reason to go to the games; that’s to see Kaleb Ramsey improve his draft stock. Spaziani has got to be the guy who is gone.

Tom Perry: I hate to go small school on this one, but Central Michigan will drop Dan Enos. It won’t shock me if he is forced out with about three games left in the season. He took over a program that was a consistent winner under Brian Kelly and Butch Jones and he has gone 3-9 in back-to-back seasons. It doesn’t look like the Chippewas will be much better in 2012. Three years may be too quick to pull the trigger, but the expectations were so high that another down year won’t be tolerated.

In fairness to Price, winning at UTEP is a tall order. El Paso doesn’t exactly sell itself to recruits. The Miners also play body bag games on the reg – this year, they draw Oklahoma, Ole Miss and Wisconsin out of conference.

Even so, UTEP has dropped off a cliff since the Miners went 16-8 in Price’s first two season, 2004 and 2005. Since then, they have been to a bowl just once. They haven’t finished a season with a winning record. Their best finish in the Conference USA West Division? Tied for third in 2009.

I expect UTEP will be an underdog in nine games this season – and a big one in a lot of them. Plenty of that is beyond Price’s control, but when has that ever mattered? I don’t pretend to know what’s on the UTEP administration’s mind, but he strikes me as a prime candidate to be on the chopping block.

Andrew Coppens: Allen’s pick is cheating. This is the final year of Mike Price’s contract, so they don’t have to fire him, just let the contract lapse. Way to take the easy way out!

Gotta be honest, I didn’t bother looking at his deal. Good catch. My pick stands, though – Price won’t get renewed.