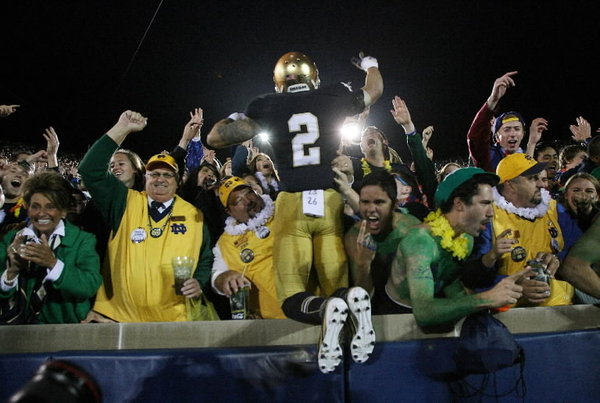 First it was Nebraska-Oklahoma. Then Texas-Texas A&M. And next, The Backyard Brawl, between Pittsburgh and West Virginia. All great rivalries, all ruined by college football realignment.

And on Tuesday morning, another great rivalry was taken away from us, when it was announced that starting in 2015 Notre Dame and Michigan will play no more. The series was already cancelled for the 2018 and 2019 seasons, and a Freedom of Information Act request by the AP revealed that Notre Dame used a three-year clause in the contract between the two schools to cancel all games starting in 2015 through 2017 as well.

Now to their credit, Michigan seemed to want none of this decision, with Wolverines AD Dave Brandon releasing a statement this morning which read:

"The decision to cancel games in 2015-17 was Notre Dame's and not ours. We value our annual rivalry with Notre Dame but will have to see what the future holds for any continuation of the series. This cancellation presents new scheduling opportunities for our program and provides a chance to create some new rivalries."

So whether you’re a fan of the Irish, Wolverines or just college football in general, enjoy these last few games between Notre Dame and Michigan in 2013 and 2014. Outside of the postseason, it is the last time you’ll see the two Midwest powers play for a very long time.

And it is almost assuredly because of realignment.

As you may remember, a few weeks ago the Irish announced that outside of football, the school would be taking all their sports and moving from the Big East to the ACC. And while the decision had no direct correlation to what we did on the gridiron (the Irish will remain independent), there was one clause that caught our attention: In exchange for their independence in football, the Irish would commit to playing four ACC games per season.

With long-standing rivalries with Navy, Stanford and USC set in stone and those four new games with the ACC, it meant some games had to go, and at the time it seemed likely that many would involve Midwest rivals like Purdue, Michigan State and Michigan. Apparently at least one of those games is Michigan, a bummer for college football fans everywhere.

Look, no matter how you feel about the state of college football and where Michigan and Notre Dame stand in the national pecking order, it was always fun to see these two teams play in a game which almost always early in the year, and almost always as a make-or-break game for each program. For one school their National Championship dreams would essentially be over by the middle of September, and for the other, they lived on for another day. That wasn’t always the case (especially in recent seasons), but still held true in more years than not.

And playing just this past weekend, we did learn how much people still care about these two teams. On Saturday night this game did a 4.0 overnight rating, which was more than the 3.2 that Florida State and Clemson (two Top 10 teams) did, and more than twice as much as Oklahoma-Kansas State. And the craziest part is that Saturday’s game was that according to SportsMediaWatch.com, it was actually the second rated Michigan-Notre Dame game since 2007. Win or lose, ranked or not, people do still care about this game, and these teams.

Unfortunately, like so many other great rivalries this one will now go the way of the dodo bird, and be nothing but a faint memory to the fans who love these teams and this sport.

We all understand why this stuff happens; reasons like realignment and TV money.

It doesn’t mean we have to like it though.