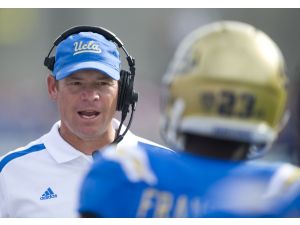 Since taking over at UCLA last December, new head coach Jim L. Mora has been known for one thing: His near-maniacal intensity. That intensity led to him throwing his own team out of practice in summer camp. It led to him kicking the media out of practice last week. And it has also led at least in part to UCLA’s 4-1 start. Mora’s intensity has been credited for a newfound toughness on the Bruins roster this season, a toughness that they simply never had in years past.

Unfortunately though, it also seems as though Mora took that intensity one step too far last week, and in the process may have created some uneasy tension between he and the entire UCLA athletics department.

That’s because on Monday morning, noted the Los Angeles Times T.J. Simers released a column in which he further detailed last week's incident where Mora apparently not only kicked the media out of practice, but berated a UCLA Sports Information assistant, in the process. Even worse, it came in front of his whole team. The particulars are ugly and embarrassing for both the coach and the school which allowed it.

And you have to admire the way Mora sent the traditional "it's us against them" football message to his team.

According to witnesses, it was like someone shredding a tackling dummy, or tossing fresh meat to a pack of animals.

He berated an unassuming sports information assistant in front of the whole team for allowing a TV cameraman to stand in the wrong place.

In doing so, he gave the sports information assistant an earful of some very impressive obscenities, which of course the young players would expect from their demanding leader.

Then Mora forced the guy to make the walk of humiliation off the practice field.

If you’re like me, I’m guessing your hope was that because Simers only cited “witnesses,” to the incident that maybe the story was more fabricated than he made it out to be. Unfortunately, it doesn’t appear that way. To his credit Simers tracked down the assistant who was allegedly berated Shawn Rourke, who wouldn’t get into details about the incident, but did say that Mora had “reached out” and offered an apology.

Well, nobody apologizes for something that didn’t happen, meaning that on some level Simers report appears to be confirmed. And regardless of the degree of dressing down that did occur, it’s a bad look for Mora.

Now before we go any further, I should say that in the interest of full-disclosure I have, in recent weeks interacted with Rourke. While I wouldn’t say we have a “professional relationship” per se, but Rourke was absolutely professional in my dealings with him. Overall, he seemed like a good guy.

Good guy or not though, it has no impact on my thoughts about this particular situation. Regardless of what may or may not have happened, if even the smallest percentage of this story is true, than Mora is in the wrong here.

Understand there’s a huge difference between being intense, and being disrespectful, and in respect to this particular situation, it appears as though Mora was the latter, not the former. Understand that it’s one thing to get on a player’s case; after all, Mora’s job is to get the most out of the 85 guys on his roster. But it’s quite another to berate one of his colleagues, another grown man who is there to work hand-in-hand with Mora. Let alone do it in front of the 85 guys on the team.

Again, we can only hope that this incident was exaggerated, or that in some way it wasn’t as bad as it was made out to be.

There’s such a thing as being “too intense.” For Jim Mora, he seems to have reached that tipping point.