For those of you keeping score at home, the state of Ohio is now 3-0 against Pennsylvania in college football this year. Last week we watched Penn State be upset at home by the Ohio Bobcats. Meanwhile in Pittsburgh the ACC-bound Pitt Panthers were stunned by FCS Youngstown State. Last night the Buckeye state chalked up one more victory against the Keystoners, with Cincinnati starting their season on the right foot. 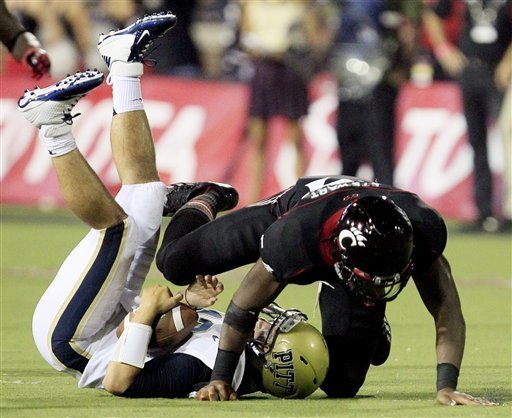 Cincinnati 34, Pittsburgh 10 [Recap via Bearcats Blog] – If you thought Pittsburgh's week one performance against Youngstown State was bad, they presented a suitable follow-up act last night against another team from Ohio. In the Big East opener Cincinnati jumped out on top of the reeling Panthers quickly, with a pair of touchdowns less than five minutes in to the game, and went on to thrash the visiting Panthers 34-10.

Bearcats running back sprinted right up the middle of Pittsburgh's defense on the first offensive snap for Cincinnati and went 58-yards for a touchdown without so much being breathed on. After Pittsburgh's Tino Sunseri fumbled a football on the ensuring drive, the Bearcats struck again with Cincinnati quarterback Munchie Legauex connecting on a swing pass to Ralph Abernathy, who found enough room down the left sideline to put Cincinnati up 14-0 after the extra point just five minutes in to the game.

Pittsburgh had opportunities though but an inability to capitalize inside the red zone multiple times, including a bizarre end of the first half brain cramp by Sunseri, ensured another long night for the Panthers. Pitt controlled the time of possession for 36:12 (who cares when you give up 14 points in five minutes) but it was Cincinnati that gashed the Pittsburgh defense for 259 rushing yards at an average of 8.4 yards per carry.

The state of Ohio will get a few more opportunities to flex their muscle against the western border neighbors. Ohio State visits Penn State on October 27 and Cincinnati visits Temple on November 10.

Speaking of the Big East, the conference may be considering a name change once their western foot print is firmly planted according to a report by Business Week.

Washington brought a live tiger to practice this week. Mike Leach thinks they should have added a husky.

The Big 12 is about to cash in on a new television contract. Like Scrooge McDuck swimming in a pool of gold.

Former Texas A&M head coach Mike Sherman says it was the Texas Longhorns who were playing in the shadows of Texas A&M. Ummm, what? Oh, and Kevin Sumlin showed up at a high school game last night in a maroon helicopter.

Syracuse will wear a commemorative patch this weekend against USC.

This weekend Texas A&M and Missouri make their SEC debut, but as Steve Eubanks writes for FOX Sports South, they have made things tougher for themselves by talking the talk.

Are you buying in to a new Taylor Martinez after one game? Sean Keeler is.

Arkansas head coach John L. Smith has formally filed for Chapter 7 bankruptcy. This had been expected for a while as he battles some financial strains.

The mother of the nation's top recruit, Robert Nkemdiche, is not sure about Clemson. Shocker, I know.

As we all gathered around our respective televisions to watch the Democratic National Convention Big East opener, we also took to our laptops and iPads to tweet our thoughts as the game unfolded before our eyes, as we do every time football is on. And with Pitt now becoming the target of humiliation with an impending move to the ACC, four head coaches in the time it takes you to read this entire post and the embarrassing production we have witnessed already this season you know there were some good lines on Twitter all night long. You can take your pick really, but this one from the model college football podcast The Solid Verbal was one of my favorites.

Everybody CALM DOWN ragging on Pitt. This is the same team that gave Youngstown State all they could handle.

Image of the Day

I'm a sucker for a good stadium cake photo, perhaps due to my love for all things baked with frosting on top. Today we have one of TCU's Amon G. Carter Stadium and it looks so delicious. The Horned Frogs open their season this weekend against Grambling State.

Truman the Tiger, Missouri's mascot, is in the Capital One Mascot Challenge and the program is trying to drum up support for their beloved tiger. L'Damian Washington and Ian Simon took some time to ask Truman why fans should vote for him, and former Missouri wide receiver Jeremy Maclin gave his support from the sideline as well. Hey, some of those dance moves were pretty spiffy…