As Michigan was being blown away by Alabama Saturday night some of Michigan's rivals from East Lansing were mouthing off on Twitter.Michigan State linebacker Denicos Allen said Spartans back-up quarterback Tommy Vento is better than Denard Robinson. Redshirt freshman safety Kyle Artinian bluntly tweeted "Denard is soooo bad!" and freshman linebacker Jamal Lyles suggested he could play under center at Michigan. 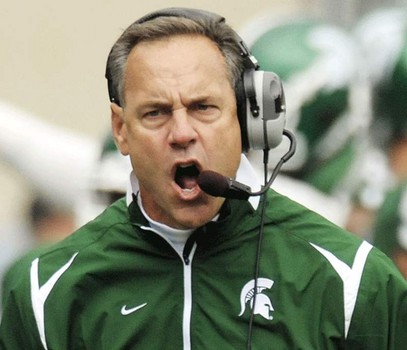 Of course, this was a classic example of young kids not thinking before they tweet, and should serve as an example of how all college football players (and athletes in general) should approach social networking outlets like Twitter. The Robinson tweets have since been deleted but the damage had already been done. Michigan State head coach Mark Dantonio was not happy about the incidents.

"Our guys need to keep their mouths shut," Dantonio said. "That blunt enough? … Especially the ones not even playing."

Dantonio also mentioned that Michigan State was embarrassed by Alabama not so long ago, in the 2011 Capital One Bowl. As if we needed another reason to love and respect Dantonio…

Florida offensive coordinator Brent Pease was none too pleased when caught on camera in the season opener against Bowling Green. Stay calm Brent. It's going to be a long season.

Michigan running back Fitzgerald Toussaint could do nothing but watch on TV as his teammates were roughed up by Alabama in week one after being suspended for the opener. Who did he watch the game with? Michigan's basketball team.

The Associated Press moved Alabama ahead of USC in this week's Top 25. Here is a rundown of some notes regarding the poll. Also, who are ten teams that need to make an impression in week two?

Georgia head coach Mark Richt is holding back on naming a starting running back as the Bulldogs prepare for a road game at Missouri. Todd Gurley thinks it will be Ken Malcome.

Billboard wars continued this week with a Texas A&M billboard in Gainesville getting pulled. The Aggies play their first SEC game this weekend at home against the Gators.

Fresh off a demolishing at the hands of Oklahoma State, Savannah State will collect another nice paycheck this week with a trip to Florida State. Savannah State athletic director Sterling Steward was a guest on SiriusXM to defend scheduling two games like this to start a season. Here's a spoiler alert, it's all about the Benjamins. Also, Chris Russo is kind of an acquired taste.

Florida State lost defensive end Brandon Jenkins for the season, so who will fill in his shoes?

Tyrann Mathieu is enrolled in classes at LSU, and paying his own way. Les Miles is not commenting on the news.

Tulsa wide receiver Bryan Burnham is done for the season after tearing an ACL in the season opening loss at Iowa State.

Tulane head coach Curtis Johnson was taken to a hospital Tuesday after being rushed form practice with heat exhaustion. He was released Tuesday evening.

Legal fees for Penn State during the Jerry Sandusky fallout have neared $17 million.

Eight North Dakota State players were charged with faking petition signatures in an effort to keep a couple of initiatives off of ballots in November.

Photo of the Day

Check out these new, or updated, Florida State uniforms, courtesy of The Nike Blog. As you can see, not much is changing here as far as the Seminoles look. This is just a routine Nike uniform upgrade without being extra flashy.