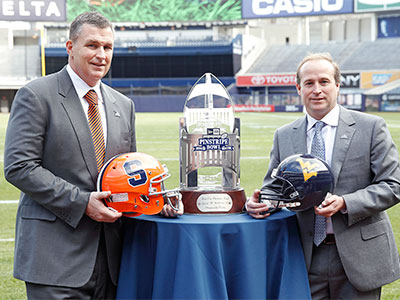 For those of you not aware of the West Virginia-Syracuse rivalry, the two used to play for the Ben Schwartzwalder Trophy when both programs were part of the Big East. The Orange have said they won’t put the trophy on the line for this game.

Syracuse has won the last two meeting between the two programs and the Orange are probably just as excited to face their old nemesis again after seeing WVU’s defense play. Of course, Geno Smith would like to get one more shot at Syracuse before his collegiate career ends. 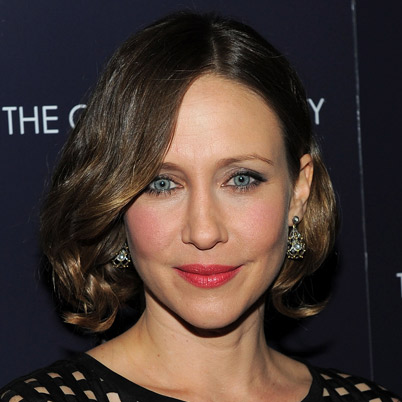 Until The Departed, there were few non-movie buffs who had ever heard of Farmiga. But we saw how smoldering she was while cheating on Matt Damon with Leo DiCaprio. WVU and Syracuse playing in a bowl game after one left the Big East and the other is on its way out sort of feels like some form of infidelity.

A word about our sponsor…: We’ve all seen at least one New Era cap in our lives, and most of us have owned one. According to the company’s website, “As an international headwear and apparel brand, New Era’s mission is to create passionate bonds with consumers through authentic lifestyle products and experiences that encourage self expression.”

Aces: QB Ryan Nassib enjoyed a huge senior season, which included 3,619 yards passing and 24 touchdowns. He shouldn’t have much trouble throwing against WVU.

Deuces: Keon Lyn is a high school teammate of WVU’s Geno Smith and Stedman Bailey, and now he gets a chance to try and stop them. He’s proven to be up the challenge this season.

Aces: QB Geno Smith was everyone’s Heisman favorite through five weeks of the season, and then WVU went on a five-game losing streak. Smith lost the Heisman, but he still had an outstanding season with 40 touchdown passes and only six interceptions.

Deuces: WR Tavon Austin is arguably the most exciting player in the game. He had a 215-yard receiving game, a 344-yard rushing performance, a 199-yard kick return game and a 68-yard punt return game this season.

Wildcard: The Mountaineers defense was one of the worst in the nation, but they showed improvement in the final two games against Iowa State and Kansas. Yep, those aren’t the two best teams but they allowed just 17 points a game.

So you don’t forget…: This game is worth watching just see Nassib and Smith, who will likely be two of the highest selected quarterbacks in the 2013 NFL draft. It should also be noted that these two programs really hate each other.

Crystal Ball: Doug Marrone has called up two all-out defense performances that shut down WVU’s offense in 2010 and 2011. Given that he’s had nearly a month to plan for this meeting you have to think he’ll have another stellar plan in place for WVU’s offense.