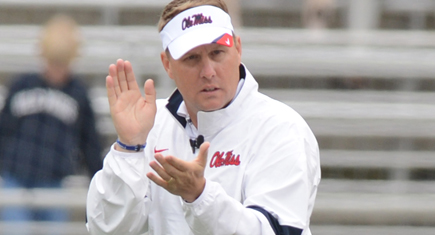 When Hugh Freeze arrived at Ole Miss we expected to see new energy pumped in to the Rebels football program. A full year into his regime in Oxford and we are certainly seeing some results on the recruiting trails.

Days after receiving a verbal commitment from Illinois five-star wide receiver Laquon Treadwell, Ole Miss has now picked up another significant verbal commitment. The latest comes from four-star defensive end Elijah Daniel out of Indiana. According to an interview with 247 Sports, Daniel liked the idea of playing in the SEC, as many high school players likely will, but he also sees a bright future in Oxford that he would like to be a part of.

“I felt like it was the right place for me,” Daniel told 247Sports. “I wanted to play in the SEC. I feel they’re on the rise and I see big things for them in the future. I want to be a part of that.”

Big things could very well be on the rise for Ole Miss. After ranking 12th in the SEC in recruiting last year the Rebels are already well ahead of the pace for the Class of 2013. The Rebels are currently ranked sixth in the SEC in recruiting by 247 Sports and that ranking could be in position to move up a spot or two if the momentum continues for Freeze.

The nation's top recruit, defensive end Robert Nkemdiche, is still believed to be considering Ole Miss as a top choice for his recruitment. The announcement that Ole Miss is a favorite caught many by surprise because Ole Miss is not exactly the program that comes to mind for most when discussing potential landing spots for the top talent in the country, especially in a division that is shared by the likes of LSU and Alabama.

But this could be a new era for Ole Miss. With National Signing Day starting to inch closer and closer, it should be very interesting to see if Freeze can keep the energy level as high as he likes to have it.