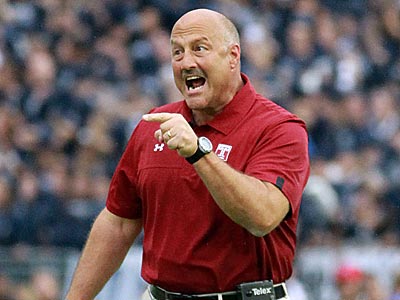 It’s been said that in college football scheduling is a fine craft. Programs usually spend years hashing out the every little detail of the 12 games on their fall schedules, often making commitments (and at times breaking them) years in advance. Heck, wasn’t it just yesterday that college football fans got their panties in a bunch over Ohio State and Oregon agreeing to play each other… in 2020 and 2021. You know, two games that won’t be played for close to a decade.

Therefore, it’s not often that you see schedules made up on the fly…let alone just weeks before a prospective game might be played. Only that’s what Temple’s football program appears to be doing right now.

You see, when the Owls left the MAC for the Big East last fall, it led to a bit of a scheduling quirk, one which saw Temple with one less league game than anticipated. With only eight teams in the Big East, the conference plays only seven league games. And with the Owls out-of-conference schedule already set in stone (again, the whole “years in advance” thing), Temple entered the season with just 11 games on their schedule, rather than the standard 12.

And now Temple appears to be trying to change that, with a December game against Hawaii.

For those scoring at home, that game would be this December. As in, like, a month from now.

Our buddy Mark Ennis of Big East Coast Bias tipped us off to the story, which originated in the Hawaii Star-Advertiser this morning. The article read as follows:

Temple has approached Hawaii about trying to schedule a football game against the Warriors at Aloha Stadium this December.

UH is looking at the possibility.

"It's very far from a done deal. We're going through the due diligence," acting athletic director Rockne Freitas said.

UH has received clearance from the Mountain West for the venture and is awaiting the same from the NCAA, Freitas said.

What appears to be most interesting is when the game would be played. As things stand, Temple’s regular season ends on Friday November 23, leaving open the last weekend of the season for a prospective game. The problem is that Hawaii plays the following week against South Alabama.

In the past, the NCAA has allowed Hawaii (and the teams who play them) to schedule a 13th game, which would come into play for the Warriors here. Then again, as best I can tell, that game has never extended beyond the last week of the regular season.

Would they make an exception and allow these two teams to play the second weekend in December, when the only game scheduled is the annual Army-Navy game?

As the report indicates this is far from a done deal.