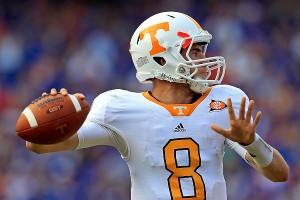 Over the course of the off-season, we here at Crystal Ball Run (as well as a number of outlets nationwide) were quick to point out that there wasn’t a single team in college football with more pressure on them entering Week 1 than Tennessee. Between Derek Dooley’s permanently scorched hot seat butt, Tyler Bray’s, ahem, interesting off-season activities, and Da’Rick Rogers getting booted to the curb just weeks ago, for all intents and purposes, it appeared as though the Vols had the weight of the world on their shoulders entering their opening weekend matchup against NC State.

And really, that was the question college football fans pondered all off-season: Forget talent. Could Tennessee handle the pressure of a Week 1 showdown? And if they lost, would their whole season spiral out of control because of it?

In regards to the latter question, that’s something that’ll have to be addressed at another time. Because in Atlanta, against NC State Friday night, the Tennessee played their most complete game of the Dooley era. They controlled things from start to finish in a 35-21 win.

On paper, the story of the game was the Vols offense, a group that entered 2012 with plenty of questions, especially after Rogers- the leading wide receiver in the SEC last year- was kicked off the team just a week ago. Of course you never would’ve known it Friday night. With Bray at the helm, the emergence of junior college transfer Coradarrelle Patterson early, Mr. Reliable Justin Hunter late and a surprisingly strong running game in between, Tennessee put up 525 yards of total offense in an effort that caught all of college football’s attention.

For the Vols, the star-power of the offense was multi-faceted.

The guy you’ll read about in the papers tomorrow (assuming of course, that anyone still reads newspapers) was Bray, who finished with 332 yards passing, including two first quarter touchdowns. One of those passes went to the early breakout star of the college football season, Patterson, who also added a 67-yard touchdown run late in the first quarter to give Tennessee a 22-7 lead they’d never relinquish. Really though, what was most impressive was the running game; when the Vols needed big yards, they got them from both Rajion Neal and Marlin Lane. The duo combined for 128 yards, many of which helped the Vols put this game away late in the second half.

However, for the college football nerds among us, the real story was Tennessee’s defense. Playing their first game in a new 3-4 system, under new coordinator Sal Sunseri, the Vols looked nothing if not revitalized.

The stats tell us that the Wolfpack put up a respectable 407 yards of total offense, but watching the game told a completely different story. From the beginning, Tennessee attacked from all angles and kept NC State senior quarterback Mike Glennon on his toes. Glennon finished with 287 yards passing, but completed just 58 percent of his passes.

So what does this all mean for the Vols going forward? Frankly, it’s hard to say.

Now in his third year, this is Dooley’s most talented team, and one that proved to have a bit of mental toughness on Friday night that they’ve been lacking in years past. However they still play in the SEC, and still have games against Alabama, Georgia, South Carolina and others awaiting them. We will find out a lot more about this club in two weeks when they host the Florida Gators, a team which has plenty of questions of their own entering their opener Saturday afternoon.

But on Friday night, it was all about the Vols. The victory over NC State was the moment Tennessee fans and Dooley alike have both been waiting for, for a long time.

The victory doesn’t mean they’re “back,” per se. But Tennessee is relevant.

That’s not something you could’ve said about the Vols the last couple years.

For all his opinion, analysis and articles on college football and beyond, be sure to follow Aaron on Twitter @Aaron_Torres.