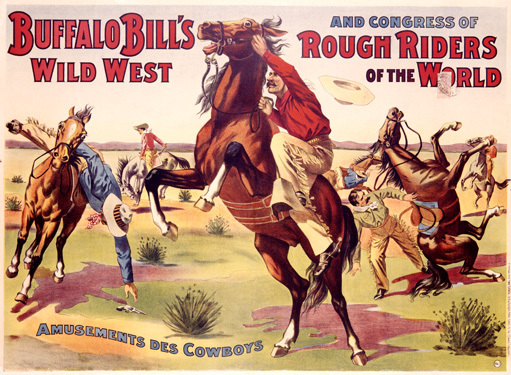 "It is filled with unexpected twists and turns. It is a tale of conquest, but also one of survival and persistence, and of the merging of peoples and cultures that gave birth and continuing life to America as we think of and experience it today."

Those words were written by Robert V. Hine and John Mack Faragher to describe the days of the Wild West and the exploration of new lands.  In truth, the days of conference realignment in college football is a modern version of that frontier time.  It's a tale of conquest for some.  A tale of persistence for many.  And a tale of survival, or lack thereof, for others.  Realignment is indeed a story of merging cultures and traditions as east stretches west and midwest reaches east.

The modern rush of conference realignment has been like nothing we've ever seen in college sports.  With a new team or new conference switching allegiances almost daily in the past week, it's easy to lose sight of just how drastically the landscape has shifted across the Football Bowl Subdivision since this saga began in full in 2010.

We begin in the Sun Belt, which lost a net one member from 2010 to 2015 and did so with largely FCS teams moving up to FBS level replacing departures to Conference USA.  League member South Alabama added a football program, Georgia State comes from a lower division, and Texas State hops over after a brief stay in the WAC.  All in all, as the lowest conference on the FBS totem pole, the Sun Belt has to be happy with one thing during realignment.  Survival.  Not every conference was so lucky…

The WAC is the biggest loser in Realignmentpalooza because the league will cease football operations (at least temporarily) next year.  Ironically, the WAC was undone by its own expansion over a decade ago when 8 members of the bloated 16 team league left to form the Mountain West.  Unfortunately, Idaho and New Mexico State are the only teams without a conference safety net and will have to start the 2013 season as independents.  The other members are scattered across mid-majordom.  With every conference expanding, there was room for only one non-BCS conference west of the Rockies.  The Mountain West won the battle, and the war. 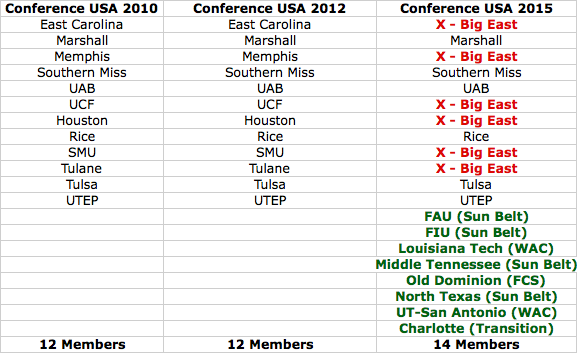 Conference USA emerged from the first round of realignment completely unchanged.  In the next round though, pretty much the entire conference left and moved to the Big East.  Or, to put it more accurately, the Big East came to them.  To fill those slots, Conference USA rummaged through the remains of the other non-BCS conferences like they were trying out for their own American Pickers spin-off.  4 Sun Belt teams, 2 from the WAC, 1 FCS, 1 new program from scratch (Charlotte), and a partridge in a pear tree.

The quietest of all conferences in realignment is certianly the MAC, who basically made a straight up trade – Temple for UMass.  The MAC can stand pat comfortable in who they are as a league with nobody really angling to go one way or another.  Have no fear, the state of the #MACtion Union is strong.

Even though their 3 biggest names (Boise, TCU, and BYU) left, the Mountain West can feel secure in what they've done during conference realignment.  They finished off the WAC and look to be in decent shape moving forward.  In fact, with the Big East not quite the league Boise State and SDSU imagined when they departed, there's even rumors the Mountain West prodigal sons may return home before they even leave.

The Pac 12 is in a clear position of power.  Even though they didn't get the bounty in Texas and Oklahoma, the league added two teams to take them to their desired 12… although Colorado has been doing a fine job masquerading as a BCS conference team the last couple years.  Now with a championsip game and a visionary conference network system, the Pac 12 can walk away from realignment as one of the biggest winners.

The Big XII's roller coaster ride through realignment was so dramatic it should be turned into a TV miniseries. Can't you just picture Kevin Spacey as the perfect Dan Beebe?  After teetering on the edge of extinction, the Big XII circled the wagons, downsizing to ensure their existence.  At 10 teams, they may have lost their championship game and 4 of their core members, but they held onto Texas and Oklahoma.  That was enough to survive and advance. 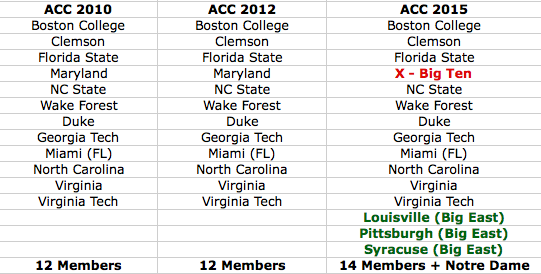 In: Louisville, Pittsburgh, Syracuse, Notre Dame (all sports but football, but ND will play 5 ACC teams every year)

The ACC may have hit the realignment jackpot by tethering Notre Dame to the conference while pillaging the Big East of its top programs.  While the Irish will still technically be independent, those 5 ACC games a year will pay huge dividends.  The ACC acted quickly to ensure its superiority over the Big East early in realignment and the addition of Louisvillle this week was a wise one to stay ahead of the game.  The ACC could even be the first of the long dreamt of 16 team superconferences if Cincinnati, UConn, or even Navy get an invite in the coming weeks.

As the preeminent force in college football, the SEC is in a true position of strength, carefully choosing to add Missouri and Texas A&M and stand pat.  If the SEC feels frisky, they could go after Clemson or Florida State to grow their empire and cause more dominoes to fall.  Once the SEC Network finally launches, the league will become an even bigger force, and Nick Saban will be one step closer to world domination.

The Big Ten, and more specifically the Big Ten Network, has been the driving force behind conference realignment.  With the success of BTN, revenues for schools have increased dramatically and other conferences are moving towards their own networks to follow suit.  After poaching Nebraska from the Big XII, Jim Delany has channeled his inner Gordon Gecko during Phase II of realignment, making a straight play for cash and television sets over wins and tradition.  Rutgers and Maryland won't excite the masses in the midwest, but they will allow the Big Ten to print their own money if BTN gets lucrative cable deals in those huge eastern markets. 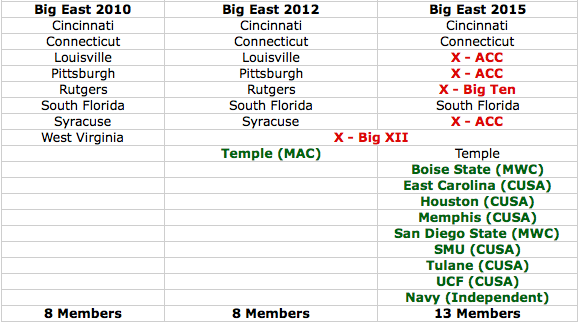 Besides the WAC (may they rest in peace), the Big East is the biggest loser in realignment.  The Big East lost their BCS status and will move forward in the merry ragtag "Group of Five" band with the MAC, MWC, C-USA, and Sun Belt on the outside looking in of the true power structure of college football.  Actually, it's pretty depressing, but every ragtag band has to be "merry."  No league saw more changeover with an incredible 15 teams passing through.  10 new members added since 2010 exceeds the league's 2010 membership!  The Big East is still awaiting their next television contract, which will go a long way in deciding their eventual fate and viability as a conference.  Although the league has grown by a net of 5 members, it's become the mascot for everything ludicrous in realignment as the first coast to coast conference – appropriate since more than half the league will be ex-Conference USA members.

At the moment, the teams left in the Big East are looking for a lifeline out with UConn devastated they haven't yet gotten an ACC invite and new recruits like Boise State considering a return to the Mountain West.  What's left behind in the future Big East is a mashed together hodgepodge of leftover parts from college football's scrapheap…

Eventually, the Wild West settled down.  Conference realignment will too some day.  But if there's one constant in life, it's change.  All in all, more than 40 schools will have changed their course during the last three years of conference realignment.  Some schools like Boise State and Texas State have even moved conferences twice in this era of realignment.  The Big East added more new football members (10) than they had football playing teams in 2010 (8).  The WAC met its untimely demise.  The Big XII came back from the grave on multiple occasions.

But we're only just beginning on this journey.  There's still plenty more of the frontier left to explore.