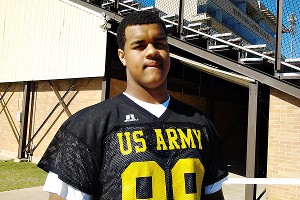 With college football’s season now over and Signing Day approaching, one of the most fascinating recruiting sagas out there doesn’t involve one player, but in fact, one family. Meet the Armstead’s, the most coveted pair of brothers on the college football recruiting scene since Keenan Allen and Zac Maynard decided to take their talents to Cal-Berkley. Armond and Arik Armstead are both looking for a college football home, and could be coming to wreak havoc at a stadium near you.

The interesting part though is this: While Arik is considered to be one of the top players in the class of 2012 (he is the No. 24 ranked player on ESPNU’s 150), Armond is actually already enrolled at USC and taking classes. Actually, he’s been doing it for four years.

Confused? Let’s try to get some clarification on this.

Like his younger brother, Armond Armstead was once upon a time the apple of every recruiter’s eye, ranking as a Top 50 player in the class of 2008. Upon enrolling at USC, he played immediately, and by the time he began his sophomore year was a starter. Injuries have limited him since, including one which sidelined him for the entire 2011 season.

Where the problem comes in though, is what exactly that injury was and is. No one will say for certain, other than to clarify that it’s not life-threatening. But while USC believed the injury to be serious enough for Armond to miss the season, the defensive lineman disagreed vehemently and, decided  to transfer out. In the process, it also led his younger brother Arik to decommit from USC, and re-open his recruitment.

Except then a funny thing happened: Apparently the whole situation was way overblown, and Armond not only has yet to transfer, but is actually enrolled in classes at USC as we speak, according to the Sacramento Bee. And as his brother is set to make a college decision, the Trojans are back in the mix along with a bounty of other teams.

Got all that? Good. Because although it all sounds figured out, there’s still a lot that could happen between now and Signing Day.

By all accounts, the pair still seem to be a package deal, and will end up together…somewhere. That could be at USC, but it also might not be. Yes Armond is enrolled in classes, but as we learn every year when NFL Draft declarations come out, “being enrolled” is simply a technicality. For transfer purposes he’ll probably have to stay at USC until the end of the semester (or trimester or quarter, whatever USC uses). But it still doesn’t mean that he couldn’t finish at USC, leave and be on campus somewhere else in time for fall practice. If not sooner.

So where does the recruitment of the brothers stand? It’s hard to say, but as we speak, Arik is receiving visits from some of college football’s most famous coaches (Think “The Blind Side”… just without Sandra Bullock in a white cotton dress). Some guy named Nick Saban was in town recently, as well as coaches from any number of other schools. Visits have already been made to Cal, Auburn and Notre Dame, with both the Irish and Tigers thought to be favorites at one point to land the brothers. Things were further complicated when Cal (believed to be one of Arik’s favorites) lost ace recruiter Tosh Lupoi to Washington. Not surprisingly the Huskies are now themselves comfortably in the mix.

Oh, and then there’s the whole USC thing. Like a good suspense thriller, just when you thought Lane Kiffin was dead, he isn’t, but instead ready to show up at the Armstead door, holding an apology letter in one hand, and a scholarship offer in the other.

From the Sacramento Bee:

“USC (yes, the Trojans are indeed back in play, with Lane Kiffin coming for a home visit soon; reports of bad blood with Armsteads and Kiffin simply not true).”

So could Lane Kiffin re-steal one of the top players in the high school class, while also re-recruiting a player already on his roster?

Stranger things have happened in the lead-up to National Signing Day.

For all his opinion, insight and articles on college football and beyond, please follow Aaron Torres on Twitter @Aaron_Torres.