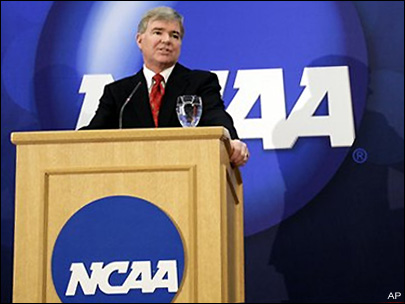 When NCAA President Mark Emmert held a summit of Athletic Directors and college Presidents last summer, there was one phrase that he continued to repeat above all. Emmert wanted to “streamline the NCAA rule book.” Simply put, there were too many rules and too many different interpretations of rules. Because of it, when a school did get in trouble with the NCAA, no one was ever sure what kind of punishment might be handed out, or if it would correlate in any way to any previous NCAA investigations. This left fans frustrated, angered and confused; after all, it seemed like some schools had the book thrown at them, while others got off with a slap on the wrist. And to a degree, that’s actually the way it was.

Well to Emmert’s credit, he appears to have followed up on that promise from last summer, when it was reported today by CBS’ Bryan Fischer that the NCAA had come up with a more detailed structure of determining, and handing out NCAA penalties.

“In terms of what is our charge, we heard President Emmert talk about this risk-reward analysis and the fact that there seems to be a general loss of integrity and upholding the rules,” Vice President for Enforcement Julie Roe Lach said. “This isn’t purely a reactive move, we’re not just doing this because of the scandals or if there is a crisis. We’re doing this because it’s the right thing to do. This is a time to redefine what are our principles and what do we stand for.”

Put in layman’s terms, what Lach (a mouthpiece for Emmert) is trying to say is simple: It’s not that the current NCAA rules are entirely broken, as much as they needed a simple tweak.

And apparently, that tweak came this afternoon. That’s because according to Fischer, the NCAA has overhauled not only how they hand out violations, but how they determine what those violations will be.

First, the “how,” and that’s relatively simple. As things stood, there were only two kinds of violations, “major” and “minor” with a whole heck of a lot of gray area in between. As we all know “gray is bad,” and that is why according to Fischer’s report, there are now four different types of violations: Most egregious, serious, secondary and minor, with the NCAA also receiving a clearer list of mitigating and aggravating factors to consider when handing out NCAA violations. With this improvement, it should make it a lot easier for the NCAA to determine what punishment will be, and how it’s handed down. In theory, no school should have to worry about their NCAA violations not being in line with another school who committed similar crimes.

Why is that? Well, because also according to Fischer, the NCAA has created a proposed “penalty matrix” to help hand down the punishments. Just looking at the matrix it’s clearly complicated, but does lay out more streamlined penalties and punishments for rules violators.

Simply put, Fischer does a better job explaining the penalty matrix than I ever could, and I highly encourage you to check out his article here. There, he gives a detailed look at how USC’s NCAA investigation into Reggie Bush and O.J. Mayo would’ve played out under the new guidelines.

And regardless of what you think about the guidelines, one thing is abundantly clear: After a long time hearing our complaints, the NCAA is finally listening. It might be a little late, but it’s better than nothing at all, right?

For all his opinion, insight and articles on college football and beyond, please follow Aaron Torres on Twitter @Aaron_Torres.