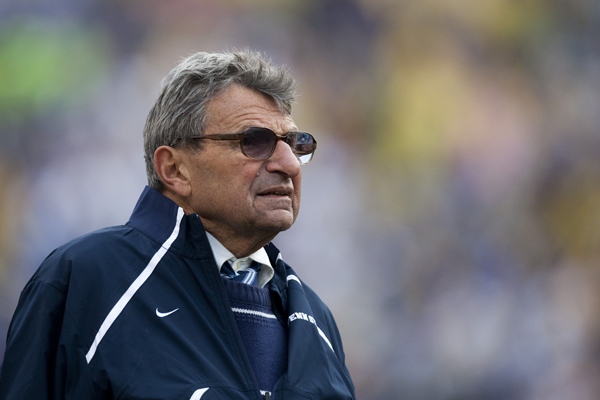 Although the NCAA could never give Penn State true justice for the crimes committed by Jerry Sandusky and the cover-up by the school, they certainly did their best to move the process forward by releasing sanctions against the school on Monday morning.

By now, you know the sanctions as well as we do here at Crystal Ball Run, but for those who’ve been under a rock for the last 10 hours, they include: A $60 million fine, four-year bowl ban, four-year scholarship reduction, the removal of all wins from 1998-2011 and the ability for any players currently in the program to transfer to a school of their choice. While the decision of the NCAA wasn’t quite the Death Penalty, it was pretty darn close.

And for the most part, the majority of college football fans seem to be in agreement on one thing: If the NCAA had do to something in this case, the sanctions handed down Monday were just about everything that anyone could ask for. The school has been punished, football has been de-emphasized, and most importantly, money has been earmarked for the victims of childhood sexual abuse.

Regardless, there is one party that seems none too happy with the announcement today, and that party not surprisingly is the remaining Paterno family.

As they do in situations like this, the Paterno family released a statement which read:

“Sexual abuse is reprehensible, especially when it involves children, and no one starting with Joe Paterno condones or minimizes it. The horrific acts committed by Jerry Sandusky shock the conscience of every decent human being. How Sandusky was able to get away with his crimes for so long has yet to be fully understood, despite the claims and assertions of the Freeh report.

“The release of the Freeh report has triggered an avalanche of vitriol, condemnation and posthumous punishment on Joe Paterno. The NCAA has now become the latest party to accept the report as the final word on the Sandusky scandal. The sanctions announced by the NCAA today defame the legacy and contributions of a great coach and educator without any input from our family or those who knew him best.

“That the President, the Athletic Director and the Board of Trustees accepted this unprecedented action by the NCAA without requiring a full due process hearing before the Committee on Infractions is an abdication of their responsibilities and a breach of their fiduciary duties to the University and the 500,000 alumni. Punishing past, present and future students of the University because of Sandusky’s crimes does not serve justice. This is not a fair or thoughtful action; it is a panicked response to the public’s understandable revulsion at what Sandusky did.

“The point of due process is to protect against this sort of reflexive action. Joe Paterno was never interviewed by the University or the Freeh Group. His counsel has not been able to interview key witnesses as they are represented by counsel related to ongoing litigation. We have had no access to the records reviewed by the Freeh group. The NCAA never contacted our family or our legal counsel. And the fact that several parties have pending trials that could produce evidence and testimony relevant to this matter has been totally discounted.

“Unfortunately all of these facts have been ignored by the NCAA, the Freeh Group and the University.”

So yeah, about that. Where do we even begin?

Obviously this statement comes from a place of passion, and in defense of the Paterno’s, they are standing behind a husband, father and grandfather they truly love. Simply put, most of us can’t even begin to imagine what it must be like to see the legacy of someone you truly love raked through the coals the way that Joe Paterno’s has over these last few months.

At the same time, this family really needs to stop talking. While they make some salient points about due process and the justice system, what they seem to be missing are themes that most of the rest of the world seems to understand. The most important one being: This is no longer about Joe Paterno. It’s about fixing the system at Penn State that allowed this to happen, and ensuring that nothing like it ever happens again. Regardless of how they came to their conclusions, the NCAA did in fact start that process today.

As a matter of fact, this statement really does hammer home one big picture theme that I couldn’t help but continue to think as this whole process played out: The biggest problem at Penn State over the last couple decades was that no one ever told Joe Paterno “no.” It allowed him the power to help cover-up Sandusky’s crimes (along with other high-ranking Penn State officials), and has clearly trickled down to his family. Simply put, the remaining Paterno family cannot conceptualize the truth about their beloved family member; in essence, that he was a criminal. Were he alive today, Joe Paterno could actually be in jail.

Ultimately that’s irrelevant now, but what isn’t is the idea that the Paterno family just needs to stop talking. This isn’t about them, and never will be going forward. It’s about getting the victims the help that they need.

Hopefully at some point they’ll realize that, although truthfully I’m not too optimistic.