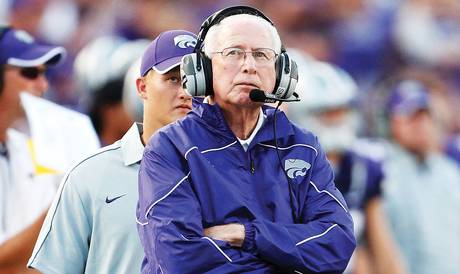 Oregon, Florida and Kansas State bolstered their arguments, while Notre Dame (and among the ineligibles, Ohio State) survived. Alabama remains on another planet.

The Tide rolled over the Vols, with Peyton Manning in attendance, in their annual TSIO skirmish. One small hope for opponents: Bama has allowed double-digit points in three consecutive contests.

Up next: No. 11 Mississippi State

The Ducks are like that thoroughbred just itching to be able to run at full gallop. Oregon is averaging a 23.5-point halftime lead.

You can make a case for the Gators at No. 2, or even at No. 1, considering their wins over Texas A&M, LSU and now South Carolina.

The Wildcats left no question with a 55-14 ambush of West Virginia in Morgantown. Collin Klein threw three touchdown passes and rushed for four more in the rout.

The Tigers tempered the “Johnny Football” chatter with a rough-hewn 24-19 victory in College Station. Now they have a full fortnight to prepare for the Tide.

Remember the beginning of the season, when it appeared that each week a defensive coordinator would fall on his sword after his team surrendered 50-plus points. Men lost their jobs over these scores.

Then there’s West Virginia. The Mountaineers allowed 545 yards in a season-opening win against Marshall. Eyebrows rose, but hey, the Mountaineers won by five touchdowns.

We likened the hype over West Virginia’s offense and the negligence in discussing its porous defense to global warming. Well, guess what? The ocean levels have finally put West Virginia under water.

In consecutive weeks WVU has lost by at least five touchdowns to Big 12 foes Texas Tech and Kansas State. In fact, despite being 2-2 in the Big 12 the Mountaineers are surrendering 53 points per game in conference. Geno Smith is real good, but it’s too much to ask him to be consistently that prolific.

West Virginia is rated 120th, or last, in the FBS in pass defense. Head coach Dana Holgorsen worked with DeForest at Oklahoma State and trusts him, but the Mountaineers have nowhere to go but up in terms of defense.

Doug Lesmerises of the Cleveland Plain-Dealer submits a top ten that we truly cannot take issue with, even though it is far from the norm among the 60 voters. Lesmerises is the only voter who does not vote Alabama No. 1 and one of two voters (along with SI’s Andy Staples) who has Texas Tech in his top ten. He is also one of four voters who has Oregon outside the top three.

The always amusing Scott Wolf has West Virginia ranked one position ahead of Texas Tech, a school that has one less defeat than WVU and beat the Mountaineers 49-14 two weeks ago.

We’ll continue beating this horse. Turnovers are no accident, but they are easily the single most accurate determinant between good teams and bad (or as our old high school coach used to say, “Somebody loses.”). The top eleven teams in the nation in turnover margin this week have a combined record of 73-3. The only teams in that group with one loss are Kent State, Louisiana Tech and Boise State. The rest are, obviously, undefeated.

Surprising Penn State is 5-2 after pasting Iowa, 38-14, in Iowa City. It was the Nittany Lions’ fifth straight victory and their best performance yet (and we wonder where they might be if Silas Redd and Brett Fera had stayed). Ohio State, which visits Happy Valley this Saturday, is 8-0 after a white-knuckle win versus Purdue. For a game that has absolutely nothing on the line – neither can even play for the Big Ten title—and with two first-year coaches in Bill O’Brien and Urban Meyer, this should be an incredible contest. And it takes place one year shy of the day that Joe Paterno broke the record for most career FBS victories. Much has changed since then.