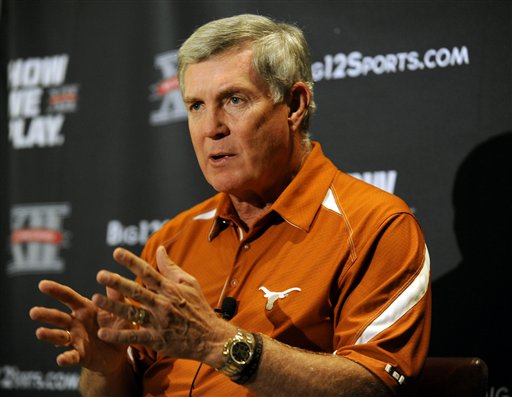 Talk about the haves versus the have-nots. Texas has more resources and built-in advantages than any other program in the nation. Oregon St. may be the most anonymous AQ-level program going.

Yet, it's Mike Riley's resourceful Beavers who enter this edition of the Alamo Bowl as the favorites, sporting the better record and stronger body of work. If OSU is a delicious Double-Double from the Beavers' favorite postgame burger joint, In-N-Out, UT is an overpriced steak.

Let's see if Mack Brown can sprinkle in some secret herbs and spices to end the season with a satisfying final course.

Who? Much like Oregon St., the alluring star of the British television series "Luther" toils in relative obscurity here in the United States.

A word about our sponsor…: Valero Energy Corp., based in San Antonio, is the world’s largest independent petroleum refiner and marketer.

Deuces: Considered one of the country's best in the preseason, the struggles of the Texas defense has to qualify as one of the season's biggest surprises. UT's D fell apart on a number of levels throughout the year, including horrendous tackling.

Wildcard: Brown was dealt the wildcard of all wildcards the day before the game, with allegations of sexual assault being raised against two of his players. Brown sent injured linebacker Jordan Hicks and second-string quarterback Case McCoy home as San Antonio authorities continue their investigation. It's unlikely either would have seen the field Saturday night, but the distraction can't be discounted.

Aces: OSU is far from a flashy team. Instead, the Beavers know how to take advantage of opponents' mistakes, as they finished the season +10 in turnover margin.

Deuces: It should come as no surprise that when OSU did break down this year, it was when the Beavs weren't taking care of the ball. OSU had a cumulative turnover margin of -6 in its three losses.

So you don't forget…: Mack Brown is making $5.2 million this year.

Crystal Ball: The Longhorns' failure to live up to expectations has had something of a multiplier effect on their flaws. While they certainly underachieved, Texas has a better squad than it gets credit for.

Still, the 'Horns are dealing with some massive upheaval. Aside from the sexual assault allegations, offensive coordinator Bryan Harsin left earlier this month to follow in Gus Malzahn's footsteps at Arkansas State. Manny Diaz interviewed for the Florida International job, too, in the last few weeks.

Too many moving parts in Austin in the last month. Conversely, all has been quiet on the western front of Corvallis. Look for the Beavers to be just a little more focused and a little more in sync.