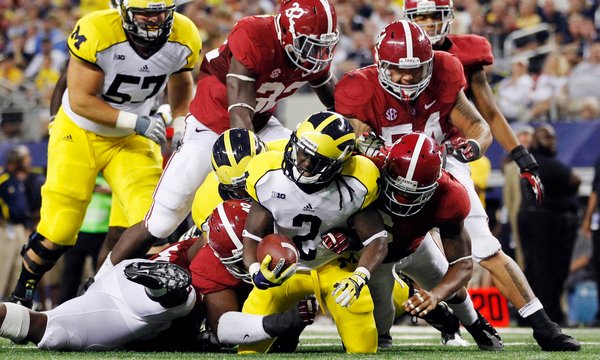 1. Alabama, which walloped Michigan by 27 in the first (and last?) regular-season meeting ever between the two iconic programs.

3. LSU, which had a player not named Tyrann Mathieu nearly return two punts for touchdowns. Odell Beckham, Jr., returned one punt 70 yards for a score and took a second one 76 yards to the abode, as well, but a flag nullified the play.

5. West Virginia, which has now scored 139 points in its last two games.

6. The State of Michigan, whose Spartans and Wolverines met Boise State and Alabama, respectively, on opening weekend. Hail to the gamers!

*The Super Six will not rank an FBS team until it plays another FBS team. Our column, our rules. Look forward to seeing you next week, Arkansas and Oklahoma State.

Team of the Week: Alabama

Devastating. The other SEC West school that played for the national championship last January also won by a palindromic 41-14 score, but the Tide humbled Michigan. Mike Slive cackles; Jim Delany wonders if there are any other Directional Michigan schools for the B1G to put on the OOC menu.

Team of the Weak: Savannah State

The Tigers lost 84-0 at Oklahoma State, which is nothing new for this FCS program. Savannah State is just 4-72 in the past decade against teams from its own level and once lost, albeit in 1953, by a score of 98-0 to Bethune-Cookman.

Just how ridiculous was this matchup? The Cowboys were a 67.5 favorite, the largest college football spread on record, at they covered by more than two touchdowns.

Worse, Savannah State travels to Tallahassee this week to visit Florida State, which is coming off a 69-3 defeat of another FCS school, Murray State. We don’t blame FCS schools for taking the checks (Savannah State earned $385,000 by going to Stillwater), but shouldn’t we return to the rule where a victory against an FCS school does not count toward bowl eligibility?

Game of the Week: Northwestern 42, Syracuse 41

The Prose Bowl saw Orange quarterback Ryan Nassib complete a school-record 44 passes for 470 yards as he rallied his team from a 35-13 second-half deficit to a 41-35 lead late. Allowing 28 unanswered second-half points? That’s SO Northwestern. But so is winning a thriller, which the Wildcats did with a pass thrown by the second-string QB. We’ve lost count of all the entertaining N’western games from the past decade.

*Don’t you love when announcers inform you, as our friend Charles Davis of Fox did yesterday, that someone is a “directional punter?” We guess that after watching that Kent State-Towson play on Thursday night that you must stipulate that.

*On Thursday night’s “College Football Live” an ESPN anchor (whom we did not recognize) said that it was “a love of football” that brought Penn State and Paterno to its knees. Incorrect. It was a love of power.

*ESPN’s Gene Wojciechowski had a piece on “College Gameday” about the “family contract” that Urban Meyer had to sign with his family in order to return to coaching. We are just wondering about the buyout on that covenant.

*Floyd Mayweather bet $3 million on Michigan plus 14. Even when he is not in the ring, Mayweather is making money for people in Vegas.

*Kellen Moore was on the sidelines for Boise State’s visit to Michigan State, but he did not play, of course. Earlier in the day college football’s winningest quarterback of all time made the Detroit Lions’ 53-man roster (after going undrafted last April). The Broncos lost, 17-13, and you wonder what might have been if Moore had one more chance to suit up. 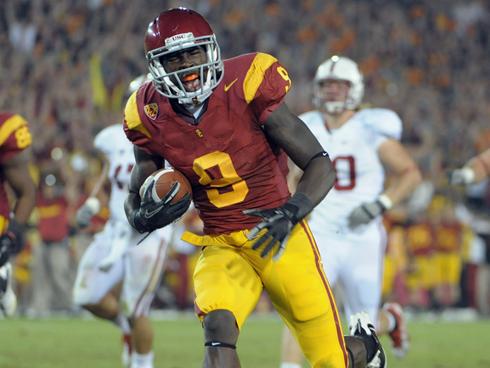 *Marqise Lee, WR, USC. Scores a 75-yard touchdown on Trojans’ first play of season off a simple five-yard curl-in, catches 10 balls and returns a kickoff 100 yards for a TD. Did the Heisman favorite (Matt Barkley) get overshadowed by his own teammate? Yes.

*David Feherty, a native Irishman who ordinarily works golf telecasts for CBS, was an inspired choice to provide color for its Notre Dame-Navy telecast. Feherty, of Bangor, County Down, Northern Ireland, described hurling as “a cross between lacrosse and second-degree manslaughter.” Your move, Rinaldi.

*West Virginia redshirt freshman linebacker Isaiah Bruce had 16 tackles and returned a fumble 43 yards for a touchdown in his first college game. On the NCAA official stats, where a player is usually listed last name, first name, it simply reads “Bruce” as the nation’s third-leading tackler.

*George Atkinson, III, Notre Dame. On his third (III?) carry of the season, the Irish sophomore had a 56-yard touchdown run that bordered on criminal.

*The two leading tacklers in FCS play on the same defense. Hampton linebacker DeVonte’ Hawkins had 19 tackles and defensive back Carvin Johnson 18 in a 41-31 loss to Tennessee Tech. The Pirates trailed 21-0 after one quarter.

*GOP vice presidential candidate Paul Ryan, a Miami of Ohio alum, spoke to the Redhawks before their contest at Ohio State (this was a red-state game in many ways, since both teams wear that hue). Ryan told the team, “They tell me Ohio State hasn’t beaten an in-state team in about 100 years (false). Let’s change that today.” Ryan meant to say, “been beaten by an in-state team” and you can forgive the flub (kind of a busy week), but this may have been the most bizarre brief pep talk since Blutarsky’s “Was it over when the Germans bombed Pearl Harbor?!?”

*Hawaii won the toss at USC and elected to defer. Norm Chow’s first game as a head coach after 40 years as an assistant and his first game decision is to give Matt Barkley the ball?

*Heading into the weekend the active leading career rusher in the FBS had yet to play a down for his school. Montel Harris (3,735 yards) was dismissed from Boston College last spring for violations of team rules. Harris, who had already graduated, resurfaced at Temple and had five carries for 12 yards in the Owls’ 41-10 rout of Villanova. Also odd, Harris’ name does not appear on NCAA.com’s list of active career rushing leaders.

*N.C. State’s David Amerson led the nation in interceptions last season with 13. In the first quarter against Tennessee on Friday night, Amerson was burned on throws of 41 and 72 yards, both of which went for TDs.

*So that dude who pilfered the football, placed it on the goal line and then danced a jig is the same guy who photo-bombed the U.S. Open interview between Webb Simpson and Bob Costas. He is having more fun than we are.

Wretched Disappointments (Please, get out of our sight; you disgust us)