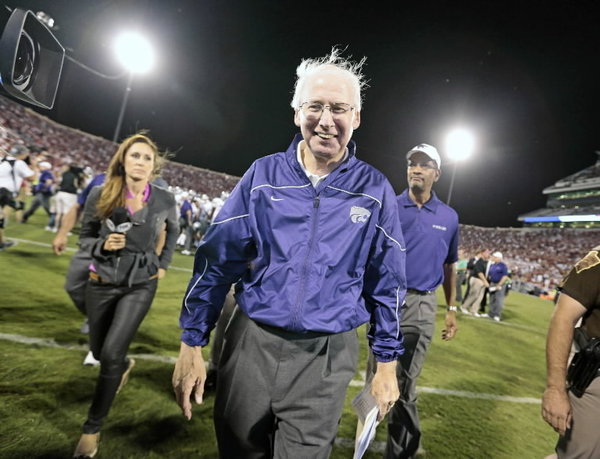 1. Alabama (4-0): Nick Saban has requested that members of the media give Alabama’s opponents props, so great work on Florida Atlantic’s part for scoring on the Tide.

2. LSU (4-0): The Tigers hung on for an uninspiring 12-10 victory at Auburn and probably deserve to get dropped. Benefit of the doubt.

3. Florida State (3-0): If the Seminoles’ offense continues to give that kind of effort, no team in the ACC can touch them. (Probably true if it doesn’t, too.)

5. Georgia (4-0): No cause for postgame posturing in the Bulldogs’ 48-3 drubbing of Vanderbilt.

Team of the Week: Kansas State

In the Wildcats 24-19 win over Oklahoma, wily Bill Snyder once again reminded us that he should go down as one of the best college football coaches ever.

KSU’s ragtag collection of transfers, JUCOs and non-recruits toppled 14-point favorite OU by out-executing the overrated Sooners to death. The Wildcats did all the little things that have become hallmarks of Snyderball – solid tackling, selling play fakes, great special teams. It was a testament to great teaching.

Kansas St. plays a unique brand of football that is far from elegant, but still beautiful in its own right.

Team of the Weak: Washington State

Year one under Mike Leach in Pullman has had its highs and lows, and this weekend’s loss to the Colorado definitely qualifies as one of the latter.

A week after mighty Fresno State waxed the Buffaloes, CU marched into Martin Stadium and knocked off Wazzu, 35-34. The Cougars surrendered 535 total yards to the putrid Buffs, who sealed the deal with a four-yard touchdown run by quarterback Jordan Webb with nine seconds left in the contest.

*Lost amid all the fuel thrown on the raging fire in Fayetteville in the Razorbacks’ loss to Rutgers, Arkansas receiver Cobi Hamilton snagged 10 balls for a stunning 303 yards and 3 TDs. QB Tyler Wilson threw for more than 400 yards on just 20 completions. How did the Hogs only manage to put up 26 points?

*Tulane looks like it gets the dishonorable distinction of worst FBS team. The Green Wave ran their record to 0-3 after getting whitewashed 39-0 by Ole Miss. Tulane managed a measly 159 yards of total offense in the game. If you’ve seen the Rebels defense, you understand just how bad that really is.

*Please, Burkhead, don’t hurt ‘em! Dangerous Nebraska running back Rex Burkhead saw his first action since suffering a knee injury in the Cornhuskers’ season opener against Southern Miss. Burkhead ran for 119 yards and 2 TDs on a mere 8 carries in 73-7 yawner over Idaho State.