2. Oregon (5-0): Ducks migrated outside Eugene city limits for first time and looked beatable for 30 minutes versus a Pac-12 basement dweller.

3. Florida State (5-0): Seminoles’ two toughest remaining games should be at Miami, versus Florida; but beware the Thursday nighter in Blacksburg in November.

4. Georgia (5-0): Random student in Athens seen holding a sign reading “I am a Gurley man.” So am I. Dawgs have yet another precocious freshman tailback in Todd Gurley.

5. Texas (4-0): Stability under center at last. David Ash is No. 2 in the nation in passing efficiency.

6. LSU (5-0): Four of the Tigers’ next five opponents, all intra-conference games (at Florida, South Carolina, Alabama, Mississippi State), are a combined 18-0. S-E-C! 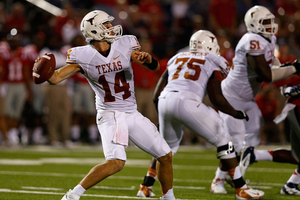 Team of the Week: Texas

The Longhorns, a combined 13-12 the past two seasons, have finally overcome their post-Colt McCoy hangover and are back. Sophomore quarterback David Ash led the Bevos on a game-winning, 75-yard touchdown drive in the final 2:34 to wrest a win from Oklahoma State in Stillwater. Ash, who threw three TD passes to Jaxon Shipley, is No. 2 in the nation in passing efficiency. The one player he trails, West Virginia’s Geno Smith, visits Austin next week.

Team of the Weak: Hawaii

Exclude the Warriors’ 54-2 victory against Lamar (we are not sure whether that is a school or an individual) and their defense is allowing 54 points per game in three losses. No one ever said Norm Chow, Hawaii’s first-year coach, was a defensive guru. The Warriors gave up a 75-yard TD pass (on a five-yard hook route) on the season’s inaugural play at USC – the Trojans’ Marqise Lee went untouched – and on Friday surrendered 47 points at BYU, a team that had been held to six points the previous week at Boise State. Hawaii 5-0 is not just a TV show, it’s a goal for points allowed for this team.

Dana Holgorsen is a Funny Guy

On Sunday, WVU coach Dana Holgorsen announced that center Joe Madsen was named the team’s Offensive Player of the Week.

*Speaking of the WVU game, the Mountaineers scored 70 points and failed to cover the Vegas spread. The Bears became the first FBS team to score 63 points and lose in 10 years. West Virginia has now put up at least 69 points in three of its last five games, a stat made more impressive when you remember that it has never played Savannah State.

*When your name is Munchie LeGaux, you make a name for yourself at every roll call. Yet, the Cincinnati QB added to his legend, beyond simply his moniker, by leading the Bearcats on a game-winning 85-yard touchdown drive in the final 1:43 to hand Virginia Tech its second loss to a Big East foe this month. Damion Julian made a sweet diving catch of LeGaux’s 39-yard heave with just 0:13 remaining to seal the win. Va. Tech has now lost twice at FedEx Field, where this one was staged as a nominal Cincy home game, in the past three seasons.

*Gary Danielson on Tennessee quarterback Tyler Bray’s penchant for stepping backward as he releases his throws to avoid being sacked: “It’s both his strength and his Achilles heel.” Amen.

*And now a message from the Surgeon General to the Baylor secondary: “Deeper than the deepest, wider than the widest. That is all.”

*Arizona State won at Cal for the first time since 1997. The Sun Devils have a bye week, then visit Colorado. There’s an excellent chance Todd Graham will have a 5-1 squad when Oregon visits Tempe on October 18. And to think Vontaze Burfict could still be a Devil (with a capital “D”) right now.

*We guess it makes sense that Air Force leads the nation in rushing (396.25 yards per game) and sacks allowed (zero). The Falcons doubled up Interstate-25 neighbor Colorado State, 42-12, and had a ridiculous 459 rushing yards. Cody Getz, who is No. 2 in the nation in rushing, alone had 222.

*Northwestern, alma mater of Brent Musburger and Stewart Mandel among others in the media who cover college football, returned to the Top 25 for the first time since 2008 with a 44-29 win against Indiana. Granted, the Fighting Fitzgeralds (5-0) do not have a win against an opponent with a winning record, but they are the only undefeated B1G squad that is bowl-eligible. The Kitties visit Happy Valley next week against a resurgent Penn State squad that has won three straight after that 0-2 start. The Nittany Lions should be 4-1 right now (four missed field goals in a 17-16 loss at UVA), with their only loss coming to a MAC squad that is currently undefeated…

*…Speaking of Scott Wolf’s favorite team, Ohio, the Bobcats outlasted Massachusetts, 37-34. The Los Angeles Daily News writer had Ohio ahead of Notre Dame on his Sept. 23 ballot. While the Bobcats do happen to be 5-0, UMass is now 0-5 and allowing 42 points per game.

*Did Duke’s Jela Duncan have all four buckles strapped when he had his helmet ripped off versus Wake Forest? Duncan appeared on his way to a touchdown, but the play was blown dead.