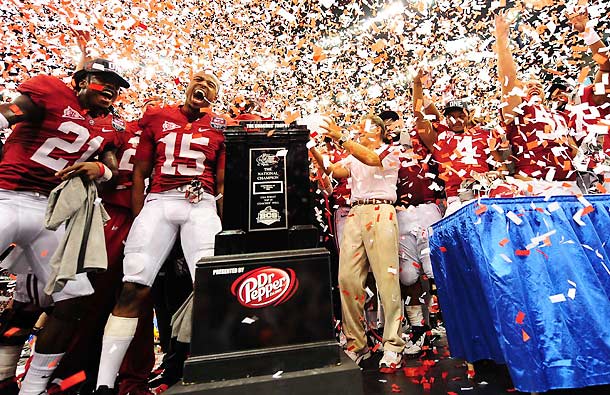 While spring football has been going on at campuses all across the country for weeks now, this Saturday is the one we’ve all been waiting for. On that day, a number of big name programs will be playing their spring games, and in the process giving us college football fans our first insight into what to expect for the 2012 season. At schools like Florida State, Georgia, Auburn and USC, the season will unofficially begin within the next few days.

Which is why it only seems appropriate here at Crystal Ball Run that we start breaking down spring games, and let you know what we’ll be watching for when some of college football’s best and brightest take the field this weekend.

You’ve probably heard of them, right? You know, the defending National Champions? The team that routinely has more pros on their roster than the Cleveland Browns? The program coach by the great Nick Saban? Them? Sound familiar?

Well, like so many other programs, Alabama will be hosting their spring game Saturday afternoon. Here are five things we’ll be watching for:

1. Who steps up at wide receiver?

It’s no secret that Alabama’s offense will again be potent in 2012, and as hard as this might be to believe, could actually be better, despite losing Trent Richardson. It sounds crazy yes, but when you factor in an improving quarterback in A.J. McCarron, a deep stable of running backs, and college football’s best offensive line, it isn’t inconceivable that Alabama actually improves on the nearly 35 points a game they scored last year.

But to do that, the Tide will need someone- anyone really- to step up at wide receiver, given that Alabama lost 67 percent of their catches, and the top four receivers off last year’s team. To loosely use an old Rick Pitino quote, “Marquis Maze, Richardson, Brad Smelley and Darius Hanks ain’t walkin’ through that door.” Neither are their 145 combined catches.

Now, given the way Nick Saban recruits, there are certainly plenty of in-house candidates to step up, with a nice assortment of returnees (Kenny Bell), emerging youngsters (Christion Jones, anyone?) and newcomers who signed this winter and enrolled in school for January. Yes, we’re talking to you Chris Black and Amari Cooper. Jones has been an especially big revelation this spring, and Bell caught 17 balls last year, so we do know that he can play at the SEC level.

But can these guys do it night in and night out against the nation’s best? That’s the question that needs to be answered going forward.

2. Who becomes the new leader on defense?

Simply put, the 2012 Alabama defense may be the greatest testament yet to Nick Saban’s recruiting ability. Despite losing as many as five first round NFL Draft picks (yes… I said FIVE!!), there’s a chance that outside of LSU, this might be player-for-player the most talented group in the SEC. Plenty of returnees dot the roster, with former high school All-Americans pretty much plugging in all the the holes from there. You might not know names like Adrian Hubbard, Trey DePriest and Jonathan Atchison yet, but you will soon my friends. You will soon.

But while this group will resemble the 2010 unit in raw football talent, they might also suffer from the same affliction that kept that group from reaching its full potential too. That problem? Leadership.

If you remember back to that year, talent was never the issue; that unit finished ranked No. 5 in the country in total defense, and made up the core of what became one of the most dominant units in college football history in 2011. The problem then was leadership; Dont’a Hightower wasn’t fully recovered from knee surgery the previous year, and everyone else was too young to step up.

Do we know who that guy is? And if not, will one develop by September?

3. Can the offensive line mask any holes in the running game?

At most schools, Alabama’s current running back situation would make most fans cover their eyes, and take a swig out of the flask they’d secretly snuck into the stadium. Trent Richardson – who at times was all the offense Alabama needed last year – is gone, and his presumed successor Eddie Lacy missed spring practice with injury. Replacements Dee Hart and T.J. Yeldon were both highly touted coming to Tuscaloosa… and have both combined for zero career carries on the college level. Yikes.

Thankfully for the Crimson Tide faithful, it might not totally matter if Alabama’s offensive line lives up to expectations. The truth is that this group isn’t just the best in college football entering 2012, but could go down as one of the best in recent memory. That happens when you return four starters off your championship team, and the one “new” starter stepping in is the former No. 1 recruit… in THE ENTIRE COUNTRY!!! Cyrus Kouandjio, come on down! You’re the next contestant on “True Life: Nick Saban is a recruiting and coaching god.”

While Alabama might not have one raw, freakish talent like Trent Richardson, don’t expect the run game to slow down.

If anything, the Crimson Tide’s junior college recruiting philosophy reminds me of the Dos Equis commercials. As in: “Alabama doesn’t recruit a lot of junior college prospects. But when they do, they prefer to sign immediate, instant impact players.”

What do you think? Catchy enough to print up on a t-shirt?

Either way, after striking gold with Terrence Cody, Quinton Dial, Jesse Williams, DeQuan Menzie and others in recent years, the next great one may be incoming cornerback Deion Belue, formerly of Northeast Mississippi Community College (say that 10 times fast!!). The junior who committed to Alabama out of high school in 2010 (and spent two years play JUCO ball because of grades), is now on campus, and expected to step in and start right away at one corner, with Dee Milliner shifting over to Dre Kirkpatrick’s departed spot on the other side of the field.

Otherwise, not a whole lot is known about Belue. But if he’s anything like ‘Bama’s other recent junior college recruits? He could the Crimson Tide’s next great cornerback.

5. Can A.J. McCarron be consistent?

It’s the simplest, but biggest question that needs to be answered if Alabama is to make a potential run at another national championship is this: How good can A.J. McCarron to be? To his credit, McCarron was a lot better than people realized early in 2011, even as the offense revolved around Richardson, and the short passing game. He finished the season with a sneaky good 66 percent completion percentage, and 12 touchdown passes in his last seven regular season.

But in the end that all just proved to be foreplay, as McCarron did nothing short of blow up in the BCS title game. Given the strength of LSU’s defense (and their secondary in particular), McCarron’s 234 yards were simply masterful, and of the 23 passes he completed, some were amongst the best balls he threw all season.

Alabama’s SEC and national championship hopes likely ride on it.