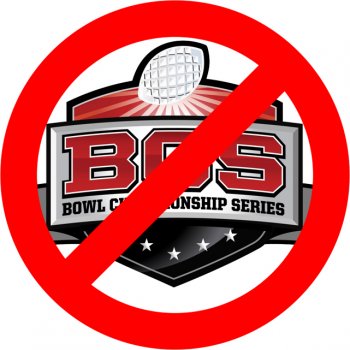 So, perhaps there actually will be more than one BCS Buster after all. Fresno State, meet last year's BCS Buster—Northern Illinois.

Both of these teams own impressive wins, but NIU's may be even more compelling as the season goes on as Iowa is playing some good football and two of the Huskies W's are now on the road to Big Ten teams. Sure, one is to lowly Purdue, but when you do something no MAC team has ever done (win twice in a single season against the B1G), you have to stand up and take notice.

On the whole, last week was a mixed bag for me and it included a surprising result as well. Before we look forward, let's look back, shall we?

Week 5 Results: 3-3
So, I said this about the Pirates of East Carolina last week: "However, picking the upset this time around just isn't smart as ECU won't be at home."

Can you say oops? I know I sure can, because ECU kicked the crap out of the Tar Heels in Chapel Hill and it appears the attention around those parts has already turned to basketball season. I was way off, but at least I have the Pirates some credit and said it was a possibility? (Silver lining, anyone…)

In the other surprising loss I took last week, Louisiana-Monroe just got smoked by Tulane at home, 31-14, and is giving me real trouble in figuring out this team. In its three losses, ULM has been outscored 135-21. Talk about brutal. More importantly, what the hell does it say about how bad Jim Grobe's Wake Forest team is?

Oh and for the "pat myself on the back" moment of the week….I bring you the Ball State 31-24 victory over Toledo—a game I said would be 30-23.  Hard to beat that without actually nailing the score, huh?

So at least it wasn't all brutal for me, right?

With that it's on to looking ahead and boy is it an important week ahead.

Week 6 Game of the Week:
East Carolina (3-1) at Middle Tennessee (3-2, 1-0 C-USA); Saturday, 3:30pm ET on Sports South: There are only three teams in all of Conference USA with a winning record, so when two of them face off and one of those two teams is coming off a blowout win over an ACC squad, you bet it will be "game of the week" material.

It also helps that the Pirates and Blue Raiders are in the same division. Simply put, the chances of either team getting to the C-USA title game this year are up for grabs this weekend in Murfreesboro. East Carolina comes in as a 7.5 point favorite in the game and that may be a bit too low.

Why? Well, ECU owns the 2nd highest scoring offense in the conference (37 points/game) and the 2nd best scoring defense in the league (just 24.2 points against/game).

However, MTSU will counter with one of the best running backs in the conference to date, Jordan Parker. He is 3rd in the conference in rushing, averaging 96.2 yards per game and rushing for nearly 500 yards already this season. Problem is…East Carolina is 1st in rushing defense, giving up just 78.5 yards a game to its opponents.

Give me the Pirates as they show they are the cream of the C-USA crop.
Prediction: East Carolina 38, Middle Tennessee 24

North Texas (2-2) at Tulane (3-2, 1-0 C-USA); Saturday 3:30pm ET on Fox College Sports: Tulane has won a two games over teams from the state of Louisiana and has built some positive momentum to their season. North Texas has an impressive win over Ball State to their credit and gave Georgia a challenge before the Bulldogs finally pulled away at home.

The Mean Green come in with a great passing attack, one that ranks 35th nationally (277.8 yards/game) and is lead by quarterback Derek Thompson. He is completing 67.6 percent of his passes for 1,020 yards and has just six touchdowns and three interceptions.  Tulane's stats make you question how they are an owner of a winning record, ranking in the 90's nationally in both passing and rushing—meaning both parts of the ball aren't humming along too well. Sure, Nick Montana has nine touchdown passes, but he isn't doing much else all that well.

I'll take North Texas on the road in this one and it has more to do with their offense than the defense, as both teams are bad on that side of the ball…at least that's what the numbers say.
Prediction: North Texas 31, Tulane 27

Northern Illinois (4-0) at Kent State (2-3, 1-1 MAC); Saturday, 3:30pm ET on ESPN3: Kent State has gotten their rear ends kicked in all three of their losses, including by MAC foe, Bowling Green while Northern Illinois has been doing the butt kicking themselves.

This should be an easy pick because the Golden Flash have been terrible at times and haven't gotten enough out anyone not named Colin Reardon. Except for the Huskies have had a bad pattern of playing to the level of their competition—playing well against Big Ten foes and struggling at times against Idaho and Eastern Illinois.

But, Jordan Lynch is just that awesome and the Huskies prove they won't slip up when conference play comes around. I mean, the dude has over 1,300 yards of total offense and 13 total touchdowns. I'll take that over Kent State.
Prediction: Northern Illinois 37, Kent State 23

BYU (2-2) at Utah State (3-2, 2-0 MWC); Friday, 8pm ET CBS Sports Network: These two schools don't like each other much right now and with Utah off the schedule for the foreseeable future it appears this could turn into a bigger rivalry.

Of course, playing good football on both sides also helps. So does the memory of the 31-16 beatdown the Aggies gave the Cougars the last time this game was in Logan (the home of Utah State).

This game has the best QB matchup of the weekend with the running ability of Taysom Hill and the amazingness of Chuckie Keeton. Could the college football world contain themselves with this matchup on Friday night? I mean…Seriously….EEEKKK!!

We have seen Utah State compete in and nearly win every game it has played this season and BYU has really only the Texas win to hang their hats on. I love me some Chuckie Keeton, so I'm going with the Aggies in this one.
Prediction: Utah State 27, BYU 23

Western Kentucky (3-2, 0-1 SBC) at Louisiana-Monroe (2-3); Thursday, 7:30pm ET on ESPNU: Will the real versions of these two teams please stand up? Seriously….The Warhawks just lost to Tulane? That shouldn't happen, but then again maybe I was giving this defense far too much credit?

On the other hand the Hilltoppers have wins over Navy and Kentucky to their credit, but in conference they've already lost to SOUTH ALABAMA. Really Bobby Petrino, really?

The one thing we know about this game is that the Warhawks need to stop Antonio Andrews, who's rushed for 727 yards and 8 touchdowns on the season. On the other hand, Western Kentucky needs to find a way to contain Kolton Browning, who admittedly isn't having the season a lot of us thought he would, completing just 52.2 percent of his passes for 967 yards and 7 touchdowns to 6 interceptions.

Now that Sun Belt play is upon us for both of these teams this game means a ton in the race for the conference title. Expect the winner to be in the mix all season and the loser have some serious trouble in the standings as the season goes on. So, who do I see winning this one? Well….Western Kentucky hasn't won a road game all season….
Prediction: Western Kentucky 33, ULM 23

Texas State (3-1) at Louisiana (2-2); Saturday, 7pm ET on ESPN3: Could the Bobcats of Texas State be a player in  the first year of their Sun Belt journey? Taking on a preseason favorite in the league could really go a long way to telling us just that.

It could well happen since they own a good running game and an impressive defense so far this season. I've seen enough college football to know those are usually themes of teams that win conference titles. However, the Ragin Cajuns have a lot to say about it for sure.

Don't expect them to take this game lightly at all because it is just the first of three games that will likely determine where the season goes for UL. They will face Western Kentucky and Arkansas State over the next few weeks.

What will be interesting to see if who's rushing attack will do more in this one. Louisiana has not one, not two….but four rushers with over 150 yards and all four have had a big role to date, with no one having more than 46 carries on the season. I like the diversity, but I really have been impressed Bobcats duo of Robert Lowe and Chris Nutall, who have rushed for 516 yards and nine touchdowns combined.

The difference in this one is that Texas State hasn't gotten anything out of their passing game and Terrance Broadway, while not perfect, has at least shown the capability of getting the ball in the endzone through the air. So, I'm going to go with the Ragin' Cajuns…but not by much.
Prediction: Louisiana 27, Texas State 23