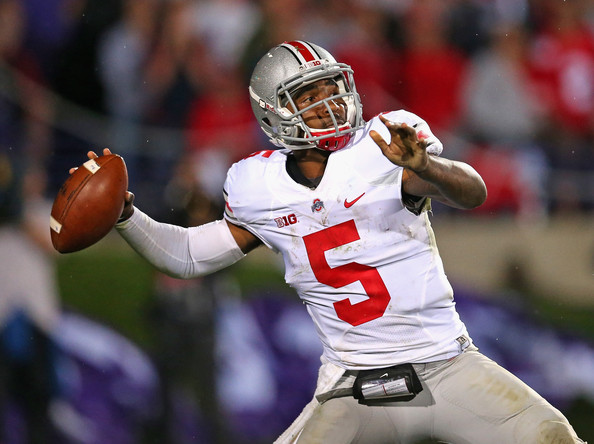 When the Big Ten expanded to 12 members and introduced the new conference championship game, it was expected Ohio State would be making routine trips to Indianapolis at the end of the season. As things have played out, the Buckeyes will finally be making their first trip to the conference's championship game this week. They will be facing a Michigan State program that has already played in one of these games and will bring the Big Ten's biggest defense with them. Ohio State is thinking about going to Pasadena, but a win likely sends the Buckeyes to the BCS Championship Game instead of the Rose Bowl Game. In a season that has seen Ohio State face criticism for playing a weak Big Ten schedule, this weekend will offer them a chance to prove they are worthy of belonging in the BCS championship mix. A win for Michigan State though would send the Spartans to their first Rose Bowl since the 1987 season.

How did Ohio State get here?

Jim Tressel made his Ohio State debut in 2001 and quickly made a point to revive a sleeping giant of a football program. Ohio State had always been a good team under John Cooper but they rarely had what it needed to get over the hump from being a Big Ten contender to a true national championship contender. Tressel changed all of that. In his second season on the job Ohio State stunned Miami in the BCS Championship Game in the Fiesta Bowl. The sleeping giant was officially awake. The Buckeyes won 10 games in all but one season under Tressel since 2002, and the Buckeyes played for two more BCS titles. The 2010 season was full of BCS potential once again until a stumble on the road against Wisconsin knocked the second-ranked Buckeyes out of the championship picture, although the Buckeyes were in a good position for a BCS at-large spot. Ohio State was invited to play Arkansas in the Sugar Bowl, but about a week before the game the program's outlook changed dramatically.

On December 23, 2010 Ohio State had five players suspended as a result of selling awards and memorabilia in exchange for impermissible benefits such as tattoos. Those players included quarterback Terrelle Pryor, wide receiver DeVier Posey, running back Dan Herron, offensive lineman Mike Adams and defensive end Solomon Thomas. That players were tangled up in an exchange of goods for extra benefits of some level was not a shock, but that the NCAA allowed the Buckeyes to delay the suspensions until the following season after the Sugar Bowl was. Unfortunately, this story would unravel a little further as we learned Tressel himself had participated in a cover-up to protect his players and program. It all caught up to him and led to the removal of Tressel, a true gentleman of the game, as head coach at the worst possible time of the offseason. The Buckeyes were forced to move forward with an interim coach, Luke Fickell, and the results on the field were not particularly flattering. Ohio State finished the season with a 6-6 record and opted to play in a bowl game despite potential sanctions coming from the NCAA. That decision proved to be costly.

Ohio State needed a game changer to get the program back on top in a hurry. Urban Meyer, who had just taken a year off from coaching, would be their guy. Meyer quickly revitalized the Buckeyes by turning in the fifth ranked recruiting class in 2012 and putting together an undefeated season in his first year. Ohio State's decision to play a postseason game the previous season though may have cost Ohio State a national championship. The NCAA slapped the program with a postseason ban in 2012, prohibiting the 12-0 Buckeyes from playing for a Big Ten championship and a bowl game. Had Ohio State voluntarily sat out of the postseason the previous season, Ohio State likely would have battled undefeated Notre Dame in the BCS Championship Game last season. That makes this season a chance for some redemption.

Ohio State started this season as the second ranked team in the country, behind defending national champion Alabama. They entered the year with a Heisman Trophy candidate in quarterback Braxton Miller, but the mobile QB was sidelined early in the year with an injury. The Buckeyes managed to get by San Diego State just fine without Miller as Kenny Guiton entered in relief admirably. Guiton led Ohio State's offense the next few weeks by putting up 643 passing yards and 12 touchdowns, highlighted by a four-touchdown performance on the road at Cal and six touchdowns against FCS Florida A&M with Ohio State jumping out to a 4-0 start. Miller returned just in time for Big Ten play, with a four touchdown performance against the defending Big Ten champions from Wisconsin. The Buckeyes also welcomed back running back Carlos Hyde, who sat out the beginning of the season due to a suspension as a result of an arrest. Hyde made his debut the previous week against Florida A&M, but the Wisconsin game was his first significant action of the year, rushing for 85 yards on 17 carries.

Ohio State was thrown a challenge in their first road game in Big Ten play, at Northwestern. The Wildcats had gotten off to a good start this season as well, but soon would learn that the season would take a turn in the wrong direction when Ohio State handed them a 40-30 defeat. Hyde was dominant with 168 rushing yards and three touchdowns and Miller threw for 203 yards. Ohio State was not clean on this night, turning the football over three times, but as the story has been for Ohio State since Meyer's arrival, this team continued to find ways to win football games.

Ohio State has now won 24 straight games, capped by a win at Michigan in dramatic fashion, intercepting a potential game-winning two-point conversion attempt in the final minute of the game. Is Ohio State perfect? Perhaps not when it comes to the X's and O's, but this season they have been perfect where it counts the most, in the W's and L's.

How did Michigan State get here?

The growth of Michigan State has been a steady work in progress under head coach Mark Dantonio. Since being hired for the 2007 season, Dantonio has led the Spartans upward with just a couple of setbacks along the way in the win total. Even when it seems as though Michigan State takes a step back, Dantonio has found a way to get them to continue to push forward. It is all a part of a master plan for Dantonio and it has been paying off. At a time when the Big Ten has expanded to include Nebraska and the Spartans are thrown in the same division as Michigan, the Spartans have easily flown under the radar. That is when Michigan State appears to be the most dangerous.

Michigan State's offense was left for dead in September. Starting the year outside of the top 25 rankings, the Spartans went through an early quarterback quandary as the defense was scoring more touchdowns than the offense. In the season opener against Western Michigan the Spartans defense scored twice with Kurtis Drummond returning an interception and Shillque Calhoun returning a fumble, while the offense mustered just one touchdown. The following week against South Florida, Calhoun did it again by returning another fumble for a score, but he also added an interception return for a score later in the game to take early command as Michigan State's leading scorer. Again, Calhoun is a defensive lineman and he had three touchdowns in the first two games of the season.

It took a game against FCS Youngstown State to get Michigan State's offense on track. Connor Cook emerged as the answer under center after completing 15 of 22 attempts for 202 yards and four touchdowns. The following week though as the Spartans stumbled against Notre Dame in South Bend in a true defensive battle. Questions were once again raised about the Michigan State offense, but the concerns were soon to put to rest as the Spartans opened up Big Ten play. As it would turn out, Notre Dame was the only team to crack Michigan State this season. The Spartans completed their first 8-0 run through the Big Ten, perhaps taking some advantage of a crossover division schedule that did not include Ohio State, Wisconsin and Penn State. Michigan State did have to make road trips to Nebraska, Northwestern and Iowa though, and they were dominant in each. The Big Ten schedule opened with a 26-14 win at Iowa thanks to a 16-0 second half to come back from a halftime deficit. Special teams padded the lead with Michael Geiger kicking three field goals from 35, 49 and 40 yards. The defense held Iowa to just 264 yards of total offense.

The true coming out performance for Michigan State may have come on November 2, with a home victory over in-state rival Michigan. The Wolverines took an early 3-0 lead but it would be all Michigan State from there. Geiger kicked two field goals from 40 and 44 yard to give the Spartans a 6-3 lead before the offense started to fire things up. Cook tossed a pass to Bennie Fowler to give Michigan State a 13-6 lead 23 seconds before halftime. The second half saw the Spartans shutout the Wolverines while the offense put up 17 more points in a 29-6 victory. Jeremy Langford's 40-yard run in the fourth quarter was the icing on the cake of a game that saw the defense allow just 168 yards of total offense, a total sunk by -48 rushing yards.