ESPN's College GameDay has reached near iconic status and this week with the announcement of the fun-fest heading to the campus of North Dakota State, it got us to thinking about the locations and games that need to be featured by the show that has now taken its act on the road every year since 1993.

You won't see Ohio State, Florida, or Michigan on this list folks. They've each appeared as host schools for the show more than 10 times a piece. Nor will you see West Point or Colorado Springs on this list as Army and Air Force have both played hosts to the show too.

So, who the heck hasn't had a visit from Lee, Kirk, Desmond, and Chris yet? Well, believe it or not there are some amazing places this show needs to see before they revisit their favorite destinations again.

Here are the Ten Places College GameDay needs to visit (in no particular order—didn't see that coming did you):

– Ole MIss (game suggestion: The Egg Bowl): Hotty Totty, gosh almighty. How the hell hasn't GameDay visited the University of Mississippi for a game yet? This one shocked the heck out of me. I mean, not even during the Eli Manning years?

The grove is a perfect location for this iconic event to make an appearance at and if you add in one of the better known rivalries in the South during Thanksgiving weekend and you've got the exact recipe for some magical television.

Now, if Hugh Freeze's bunch can become an SEC West contender this  could be a reality sooner than later.

– Princeton (game suggestion: any of the "Big Three"): Who played in the first ever college football game? If you aren't a crazy history buff chances are you aren't guessing Princeton vs. Rutgers, but that is exactly the two teams that opened up the floodgates. So, why not return to one of the original places for the game, right?

Besides, there is still something unique and fun about any of the Harvard-Yale-Princeton games (otherwise known as "The Big Three" or simply HYP). Maybe they would be smart to wait until the 150th anniversary of the first college football game to do it, but a nod to the past and a spotlight on the team that has won the most national titles in the history of college football (bet you didn't know that either) should 100 percent be on the GameDay agenda in the future.

– Lafayette vs. Lehigh ("The Rivalry"): This is the longest played and most played rivalry in college football history, starting all the way back in 1884 and has been played every year uninterrupted since 1896. So, next season, in honor of the 150th game in "The Rivalry" these two will meet at Yankee Stadium.

College GameDay loves them some history and for perhaps the most historic rivalry in all of college football, why not highlight this game? Ideally, doing it on one of the two campuses would be the coolest thing to do, but giving this game its due no matter what should happen sooner than later.

– California ("The Game" vs. Stanford): This is an easy call for me. I'm a bit shocked that the folks from College GameDay haven't visited Berkley just yet. Stanford is in the national spotlight and this game has become an iconic West Coast rivalry with some of the craziest finishes in college football.

Cal's "BearRaid" not only sounds cool, it has a quarterback who is cool in Jared Goff too. Get the the GameDay crew to Berkley sooner than later is my suggestion. If it can't happen with one of these teams in a Top 5 it won't ever happen and that would be a shame.

– Montana (game suggestion: Brawl of the Wild): By all accounts the Montana stadium location is amongst the most picturesque in all of college football and the team has played some great football over the past few decades. 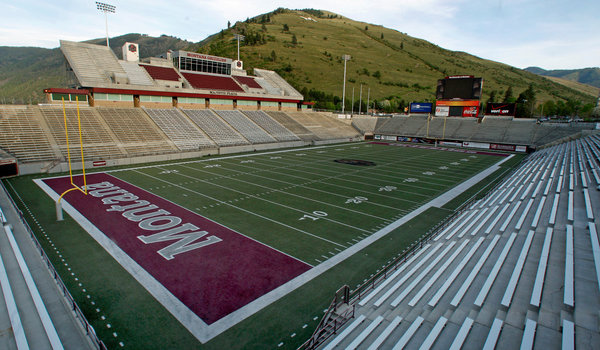 The Brawl of the Wild, the rivalry between Montana and Montana State should be the setting for the visit as well. All the game is is the oldest FCS rivalry West of the Mississippi River for cryin' out loud. They play for the Great Divide Trophy on an annual basis and seriously, take a look at that location… How could they not want to put that as a backdrop for the game?

Montana also happens to have won a few national championships and is currently just outside the Top 10 in the latest FCS poll, so at least it isn't just about the setting or the rivalry itself.

Unfortunately, the Grizzlies have been in the headlines for all the wrong reasons off the field and it may be awhile before ESPN would ever consider visiting the Mizzoula campus. Perhaps visit for a redemption story when the house gets cleaned off the field? We all know how much ESPN loves those stories.

– Carnegie Mellon (game suggestion: Academic Bowl): Look, how many times have we heard about academics in college football on ESPN GameDay? If at all, it's been probably about 70-30 on the negative side. So, why not highlight a game on the DIII level named the "Academic Bowl?"

Showing that college sports is more than just the Alabama's, LSU's, or Ohio State's of the world wouldn't be the worst thing in the world and this game between two of the the countries best academic institutions would accomplish this feat.

– Wabash (game suggestion: Monon Bell): Did you know that all-Male schools still exist in America? Wabash is one of just three non-religious Men's colleges in the country. They also happen to compete in one of the most intense and bitter rivalries out there against DePauw for the Monon Bell.

I'll let you read more about it here, but at the end of the day ESPN's College GameDay has had a history of wanting unique angles and games to highlight, why not this game? It's not as if it is some made up trophy game (right Iowa and Nebraska), but rather a rivalry built off the fanbases and a game with a great history.

This season will be the 120th game between the two schools, why not wait another five years and get your butt to Wabash vs. DePauw and showcase what it really means to play college football for the love of the game?

– Army vs. Navy: Do I really even need to expound upon this one? Seriously, how the crap haven't these guys been to this game. In fact, the only one of the three service academies that GameDay hasn't been to is Navy in Annapolis, MD so perhaps they should pick Air Force vs. Navy first… However, in the national conscious this game means something.

Homes are divided, bases are divided all over the world and friends become enemies for one day out of the year.

This one needs to be corrected like ten years ago… Get on it ESPN.

– Yale (game suggestion: Harvard): Look, the Yale Bowl is simply the most iconic stadium in the entire country. Yes, Rose Bowl, I just said that. Add in seeing that stadium with the bitter Harvard vs. Yale game as the backdrop and you've got something.

Of course you would need something unique to make this game happen on the GameDay radar, so may we suggest this season? Why? Well it is the 130th matchup between these two schools this season.

The only hangup in getting this to ever happen is that this game, like most great rivalries, is played near or at the very end of the season and it is likely that GameDay would rather focus their attention on the "big boys." However, there should always be room for this part of the game too in my book.

– Virginia (game suggestion: vs. North Carolina): Yes, Va Tech isn't my suggestion and that's because UNC vs. UVa is known as "The South's Oldest Rivalry." This game is the 4th oldest of the BCS school rivalries and has been played more times than even Army vs. Navy.

Add in the awesome campus in Charlottesville and we have one of the few BCS rivalry games that haven't had a school with ESPN's GameDay on campus. Of course it would really help if Virginia would wake up and become relevant on the football field anytime soon too.

These are just a few of the fun and interesting games GameDay could highlight. We'd love to hear your suggestions and remember it has to be a school that has never hosted the iconic TV show before. Let us know on Twitter @CrystalBallRun.