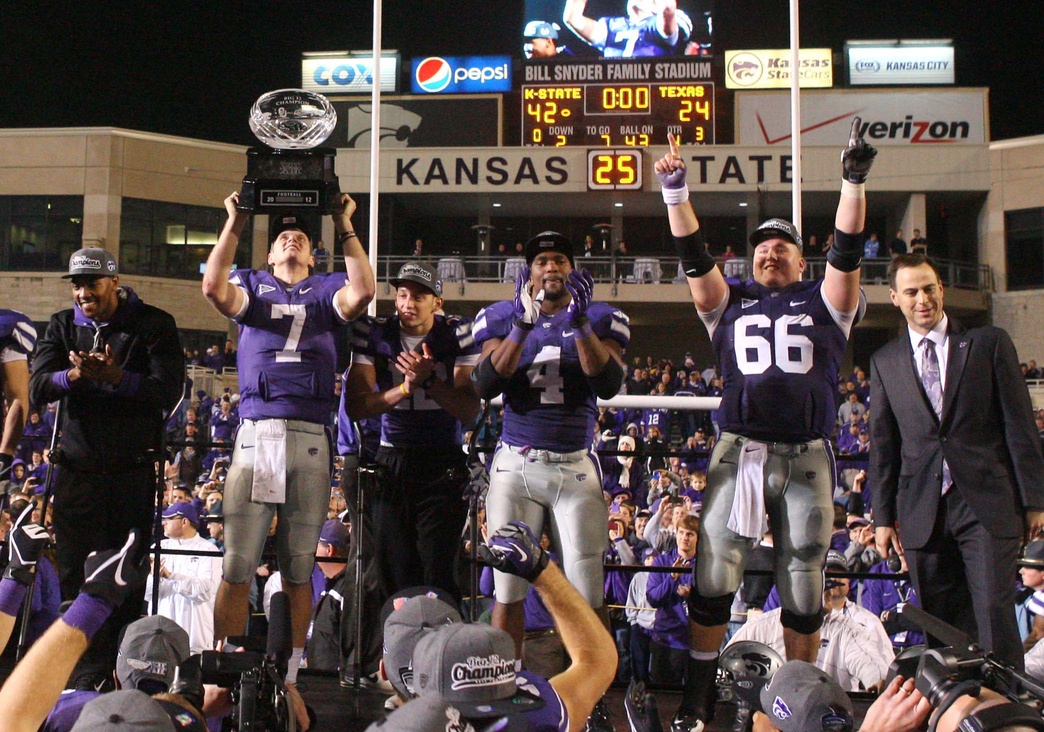 Saddle up, because it is time to relive the 2012 Big 12 season! From the additions of West Virginia and TCU to the BCS and Heisman push by Kansas State, the 2012 season was quite a ride within the Big 12. We also saw another steady season from the Oklahoma Sooners, who once again dominated the Red River Shootout Rivalry while the Texas Longhorns experienced their ups and downs once again. Baylor kept the foot on the offensive gas petal after losing Robert Griffin III and Kansas… well, Charlie Weis.

The expectations were high for the Big 12 in 2012. The additions of two quality programs in West Virginia and TCU were expected to raise the overall quality of play in the conference, perhaps more than making up for the losses of Texas A&M and Missouri. TCU had become one of the top programs from the non-BCS conferences and with Gary Patterson at the helm the Horned Frogs figured to be a force to reckon with right off the bat. West Virginia was fresh off a Big East title and a blowout victory in the Orange Bowl over ACC champ Clemson, and that crazy offense was supposed to blend right in with the Big 12.

West Virginia actually got off to a rapid start as a Big 12 member by winning their first five games displaying an offense looking to be unstoppable with Geno Smith, Tavon Austin and Stedman Bailey forming a dynamic triple threat and Andrew Buie helping out on the ground as well. Dana Holgorsen and the Mountaineers had no issues with offense in their Big 12 debut, outlasting Baylor in a back-and-forth 70-63 tilt between top 25 teams. The following week the Mountaineers traveled to Texas and defeated the Longhorns 48-45. Unfortunately for the Mountaineers, this was the peak of their 2012 season, as West Virginia would drop their next five games with the defensive shortcomings becoming more and more exposed and the offense hitting a wall. West Virginia was blown out by Texas Tech and dominated at home by Kansas State in mid October, which figured to assert Kansas State as a legitimate BCS contender. 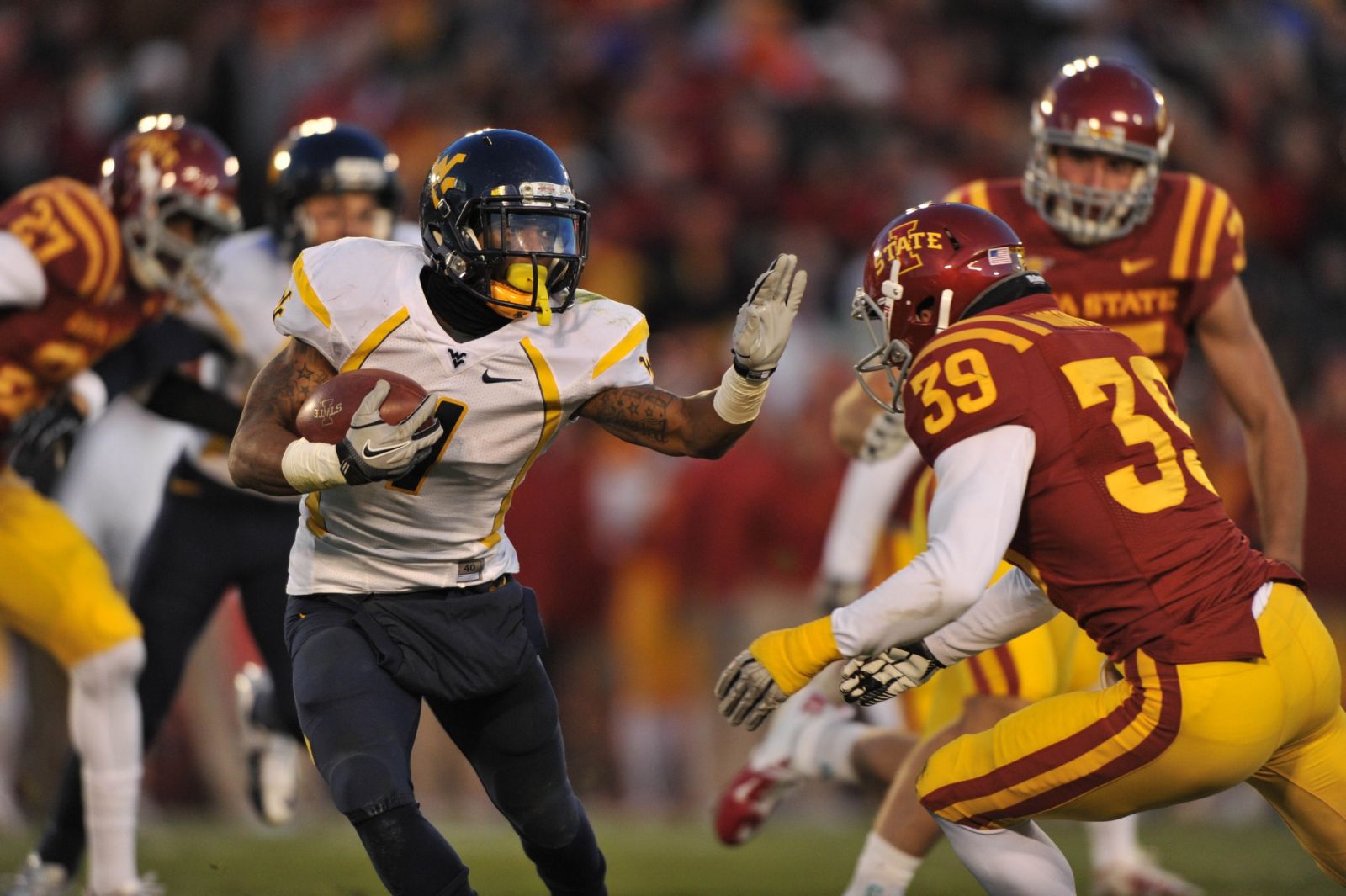 When the season kicked off, six members of the Big 12 were given preseason Top 25 rankings by the Associated Press. As the season unfolded though we would see that number dwindle to just three at the end of the season. Oklahoma began the season as the top Big 12 program, ranked fourth in the nation, but it would be Kansas State that would see a potential run for a BCS Championship bid come together while quarterback Collin Klein also became a legitimate Heisman Trophy contender along the way.

The Wildcats jumped out to a 4-0 start, highlighted by a 52-13 win at Miami, but it was not until Kansas State handed No. 6 Oklahoma a rare home loss on September 22 until the thought of a potential BCS Championship came in to view in Manhattan. Back-to-back blowout victories at No. 17 West Virginia and at home against No. 15 Texas Tech kept Kansas State in the picture and the Wildcats eventually reached top spot in the BCS standings following a victory at TCU (and Alabama was upset by Texas A&M). But a road trip the following week to Baylor would prove to be the trap, as the Bears scored the huge 52-24 victory to shatter the BCS championship plans for the Wildcats. As it turned out, second-ranked Oregon also came up on the wrong end on the scoreboard that day, sending Alabama and Notre Dame in to the top two spots for the remainder of the season. The loss to Baylor may also have hurt any Heisman hopes for Klein, the Big 12 Offensive Player of the Year. Klein still went to New York for the ceremony, but it would be Johnny Manziel who had captured the Heisman moment and had all of the momentum at this point.

The Big 12 in Bowl Games

All but one Big 12 program managed to reach a bowl game in 2012, a truly amazing stat for the 10-member conference. Kansas was the lone Big 12 team on the outside looking in of the postseason, as Charlie Weis and the Jayhawks went 1-11 on the year. As for the teams in the postseason, the Big 12 came up on the losing end more often than not, and the conference did not fare so well in the more marquee postseason match-ups. Overall the Big 12 was 4-5. Oklahoma State had the easiest match-up against a mediocre Purdue team that moved up the Big Ten's bowl lineup with Ohio State and Penn State ineligible for postseason play in the Heart of Dallas Bowl. The Cowboys jumped all over the Boilermakers in a 58-14 rout. Texas Tech also scored a victory over the Big Ten against a Minnesota team that also got bumped up in the bowl line-up. The Red Raiders edged the Gophers 34-31 in the Meineke Car Care Bowl of Texas. Baylor scored a solid victory over Pac 12 South champion UCLA, 49-26, in the Holiday Bowl for what might have been the conference's best postseason win, and Texas ended the season with an Alamo Bowl victory over Oregon State, 31-27, in one of the more entertaining games for the Big 12.

Kansas State ended up in the Fiesta Bowl against the Oregon Ducks but were no match for the speed of the Ducks in a 35-17 setback. Oklahoma played former Big 12 rival Texas A&M in the Cotton Bowl but had no answers for Johnny Manziel and the Aggies in a 41-13 blowout loss. West Virginia was another blowout victim, against old Big East rival Syracuse in the Pinstripe Bowl (38-14), and Iowa State was also handled firmly in the Liberty Bowl, losing to Tulsa 31-17.

TCU put forth a solid effort in a defensive battle against Michigan State but came up just short, 17-16, in the Buffalo Wild Wings Bowl.

No. 14 Texas 66, Mississippi 31 (September 15, 2012) – It was a strange season for the Big 12. Finding a signature win out of the entire season was fairly difficult to do and picking the top in-conference victory seems like a conflict of interest. So here we give props to Texas, who went in to SEC territory and returned with a wildly offensive victory in a 66-31 victory at Ole Miss. The Rebels are hardly the cream of the crop in the SEC, let alone the SEC West, but we'll give the Longhorns credit for going on the road in the toughest conference and picking up an impressive win.

No. 1 Kansas State 24, Baylor 52 (November 17, 2012) – Kansas State was just weeks away from playing for their first BCS championship. Had they defeated Baylor the Wildcats would have improved to 11-0 with one game to play, at home against Texas. That is how close Kansas State came to playing for a BCS title, representing the Big 12 as well. Instead Kansas State ended up in the Fiesta Bowl and lost to Oregon in rather convincing fashion. This game also tarnished any potential Heisman campaign for Klein. Maybe Alabama shuts down Kansas State the way they did Notre Dame anyway, but this may have sent a second Big 12 team to the BCS as well.

The Big 12 underwent a few line-up changes in the past few seasons. Nebraska left for the Big Ten and Colorado joined the Pac 12 prior to the 2011 season. Texas A&M and Missouri both left for the SEC last fall. So far the conference has managed to fill two of those vacancies, with the additions of West Virginia and TCU last year. For now, the conference appears settled on fielding a ten-member conference and with the ACC locking down a stable membership for the time being it appears as though there are no realistic options worth considering for a while if the conference did in fact want to get back to 12 members.

There will be no realignment changes in the Big 12 this season, which means another year without a conference championship game.

The Big 12 has been home to some good job security the past couple of seasons. Not including a head coaching change for SEC-bound Texas A&M last year, the Big 12 has had just two head coaching changes the past three years. With coaches like Bob Stoops, Mack Brown and Bill Snyder in place. The pressure may be mounting in Austin, which could leave to some interesting shakeups next offseason, but for now the Big 12 ushers in just one new head coach in the conference.

Texas Tech – Tommy Tuberville made a somewhat surprising move when he decided to leave Texas Tech to fill a vacancy that opened up at Cincinnati, after Butch Jones was hired away by Tennessee. The Red Raiders found a seemingly natural replacement though with Kliff Kingsbury, a former Texas Tech quarterback. Kingsbury was a member of Kevin Sumlin's coaching staff last season, working as offensive coordinator and quarterbacks coach. If he can bring a bit of the success he saw with Johnny Manziel at A&M, this could very well be a terrific return home for Kingsbury.