Editor’s note: It is obvious there were more than 117 fans in attendance, although Georgia Tech has not shared a more definitive number. Attendance total aside, the overall point of this article addresses trending concerns regarding spring football around the country.

Things with better attendance than Georgia Tech’s Spring Game? ….The resturant I had dinner at tonight.

Events with a bigger attendance that Georgia Tech’s spring game: the restroom break I just took

Georgia Tech had a whopping 117 people attend their Spring Football Game tonight. ONE HUNDRED AND SEVENTEEN.

There were 13 fumbles in the Georgia Tech spring game. Guessing that is one for every person in attendance. pic.twitter.com/sDIMXpoRhX

FYI, there are as many people in the Zebulon Road Chik-Fil-A this morning as there were at the Georgia Tech spring game last night.Carry on.

Georgia Tech PR Guy (@DeanBuchan) stayed away from attendance on his tweets and in the story he filed last night and GT’s Athletic Director Mike Bobinski (@GaTechAD) didn’t tweet about the game at all (I guess it wasn’t as important as a Georgia Tech baseball game for him). 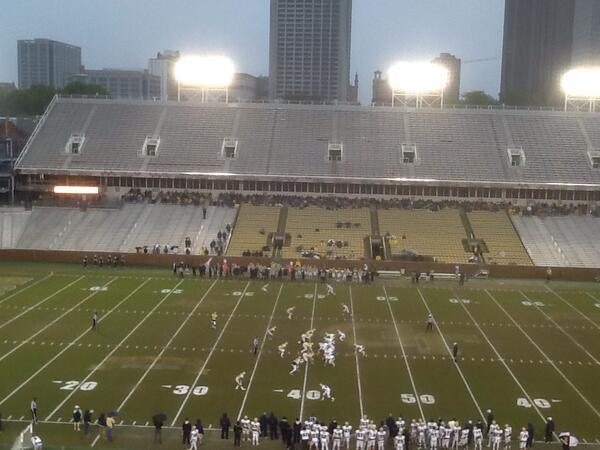 In comparison to Georgia Tech’s attendance, Clemson and FSU both had over 30,000 fans, Louisville had 27,500 and Maryland brought in 8,400. SB Nation has a full listing here (here is a separate confirmed list of spring attendance figures, able to be sorted by conference).

So what went wrong? Obviously the weather had a huge impact as it rained last night in Atlanta.

Wanted to invite everyone to spring game Friday night at 7:00 p.m. Don’t let weather forecast keep you away!! #GTFootball !!!

Maybe the bigger overall problem is Georgia Tech moving their spring game to Friday night and trying to re-brand it “Friday Night on the Flats”. The first year of the re-brand, Georgia Tech had an attendance of 18,125. Last year, they drew just 5,000. And then this year, the “rumored” number of 117.

The idea to move the spring game to Friday night worked for one year but it’s not always good just to be different (especially in a city with the kind of traffic that Atlanta has on a Friday evening). The move to Friday could have been done with the idea that more recruits would be available to come to the game (since it wasn’t on the same day as Clemson, FSU, Georgia, Auburn or Alabama) and the AJC reported that a big crowd of recruits was expected for this years game. That may backfire if these same recruits head over to Alabama or Auburn today to see what a spring game at those schools are like.

Weather not included, having a spring game on a Friday night is not a good idea (unless it’s done on a one off). A better idea is to have it on a Sunday afternoon or take a page out of Duke’s playbook and have it earlier in the year or later in the year where you don’t have to compete with other schools for prospect visits.

This attendance figure can be seen as a cross-roads of the Paul Johnson era at Georgia Tech. Georgia Tech football has not been horrible under Johnson as they’ve posted a 47-32 record and have gone 31-17 in the ACC but most of Johnson’s success came in the first two years playing with Chan Gailey’s players. In the last four years, GT has gone 28-25 and has gone 0-8 against the best two teams in their half of the conference (Miami and Virginia Tech) and are a combined 1-7 against Clemson and Georgia.

The attendance at Georgia Tech’s spring game was a black eye but it shows how dedicated the fan base is to Paul Johnson and the team that he’s putting out on the field. No matter the rain, fans would have came out if they felt Johnson had this team headed in the right direction but right now they don’t know that and Johnson does not have the buy-in of the fans. The attendance of this game, while not very important when looked at by itself, underlies the state of Georgia Tech football and makes this a make it or break it year for Paul Johnson.