After the 2017 WSOP event where the youngest player at the final table, Scott Blumstein, walked away with $8.15 million, poker players everywhere are eagerly awaiting the 2018 version of the biggest and richest poker event anywhere. Being the most important event of the Poker season, the World Series of Poker is televised around the globe to millions of fans of the game.

The 2018 WSOP is taking place, as always, at the Rio All Suite Hotel and Casino in Las Vegas, Nevada between May 30 and July 17. Over 7,000 poker players, who have each paid their $10,000 entry fee, will fly to Sin City in the desert to pitch their wits against each other in the richest event on the poker calendar. The $10,000 buy-in has been the same since 1972.

The World Series of Poker in its current format has been held every year since 2005 and has always been held at the Rio Hotel and Casino. With a multitude of events – over 70 this year – over the 40 days of the Series, the winners of each event receive a World Series of Poker bracelet, a cash prize based on the number of players in the event, and the buy-in amounts. The events contain a mixture of smaller stake events and those for the high rollers. The top prize, won by Scott Blumstein in 2017, is the $10,000 no-limit hold’em ‘Main Event’. The winner of this event is considered to be the World Champion of Poker and will have beaten the thousands of entrants for the prize. 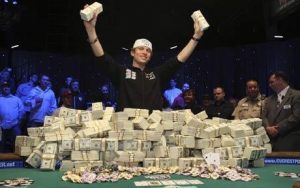 The history of the event goes back well before 2005 when, in 1970, the Las Vegas casino owner and poker player, Benny Binion, invited seven top players to his Horseshoe for a series of cash games. These included five card stud, deuce to seven low-ball, razz, seven-card stud, and Texas Hold’em. The winner that year, and the following year, was Johnny Moss, and he was elected as the first World Champion of Poker.

Since the acquisition by the company now called Caesars Entertainment in 2004 when they bought Binions Horseshoe, they have retained the rights to both the World Series of Poker and Horseshoe brands. Although the WSOP has been held at the Rio since 2005, Binions is still considered by many poker aficionados as the birthplace of the modern game. Binion’s Hall of Fame Poker Room welcome visitors with the words, ‘Binions, The Place That Made Poker Famous’ and it has been compared to the ‘Wrigley Field or Fenway Park of casinos‘ by Nolan Dalla, media director for the World Series of Poker.

The biggest change that happened to the Series was the introduction of online poker in the late 1990’s and early 2000’s. The unexpected WSOP winner in 2003 was the then-unknown player, Chris Moneymaker, who’d qualified for the event through playing online. His $2.5 million winnings heralded a huge rise in the number of online players globally and the following year the number of Main Event entries tripled to 2,576 players. The following year it doubled again. Changes in US law in 2006 meant that some of the online poker sites left the US market, but the effect on the Main Event was negligible. WSOP had become a huge event being watched by millions on TV and online.

The 2017 WSOP was sponsored by 888 Poker and the Main Event winner, Scott Blumstein, was one of their ambassadors. The holder of an accounting degree from Temple University, Blumstein heralds from New Jersey and, before his stunning win in the 2017 WSOP Main Event, he had $312,142 in live earnings and another $149,046 playing online. He is known for his understated comments about the game and what lies ahead for him. “I don’t have an ego in this game” he is reported to have said after the win. “I check my ego at the door.” He also went on to say that money didn’t motivate him and that he didn’t enter the event to win $8 million, “but that being said it’s nice to have some freedom now. The goal was to get to a point where I can do whatever I want to do, and I think I’m going to have that opportunity now whether it’s poker, business, or going back to school. I have the freedom to do that now. That’s the American dream in my eyes and finding happiness is part of that. What a good way to get there.” What a good way indeed!

In an earlier 2014 interview, Blumstein credited Chris Moneymaker, the 2004 WSOP Main Event winner, as one of the principle reasons for him starting the game. He got into playing poker at High School with older boys. It appealed to him because it contained three things that he enjoyed doing – math, gambling and thinking. Self-taught, Blumstein always felt that he was at a disadvantage to other players because he hadn’t played online. Online gambling in New Jersey only became legal in February 2013 when the then Governor, Christie, signed a bill regulating online poker and casino playing in the State. Thirteen online gambling sites launched simultaneously in the State on November 21, 2013.

Online poker will always go hand in hand with the table game. The online version offers players the versatility to be able to play from anywhere in the world and at any time – and with no more than a smartphone in their hand. Casinos offer a great buzz, and the real-life drama of the WSOP wouldn’t exist without the tables, but the technology of online games means they are getting very close to recreating the feel of the casino.

So what can we expect for the 2018 WSOP? There are undoubtedly going to high stakes and high drama and new winners. Every one of the 7,000 players that attend the Series believes that if everything goes their way, then they can win. Scott Blumstein is going to have to be on his metal to retain his title of the World Champion of Poker.