Almost exactly one year ago, WWE picked up more mainstream press attention than it had received in years when it announced the signing of Ronda Rousey. It was the perfect marquee name at the perfect time for the company, which for the past couple of years now has been trying hard to change the perception of the way that it uses its female performers. Gone are the ‘bra and panties’ matches of twenty years ago. Gone are the underwear models, given basic training and then sent into the ring to have slap-fights with each other. WWE’s current crop of female stars are the best and most athletic performers of their gender that the company has ever had; easily as talented as any of the men, and in many cases exceeding their standard.

Rousey fit into all this perfectly. She was the one who broke the glass ceiling for women in combat sports. She was, in the days before Conor McGregor, the biggest draw that UFC had. Having held their first ever all-women Royal Rumble match, their first women’s Elimination Chamber match and their first women’s TLC match, WWE were trying to find a way to have women headline WrestleMania for the first time ever. Rousey was a star big enough to do that; a bigger draw than any of their established female talent. Better still, she was a WWE fan, and she was happy to do it. It was a match made in heaven, and at first, the fans loved it.

One of Becky Lynch’s catchphrases is ‘straight fire’; a description that’s at least partially inspired by her flame-red hair. She may be on fire now – arguably the most popular wrestler of any gender anywhere in the world – but it’s been a slow burn to get here. Given how she started off, it’s a miracle she’s still with the company at all.

When Becky Lynch first appeared in WWE’s development territory NXT in 2014, she was a far cry from her current persona as ‘The Man’, a wise-cracking, no-nonsense tough girl. Being Irish, Becky was subjected to all the wit, wisdom and thought that WWE often put into new characters, and was sent down to the ring dressed all in green and doing Riverdance. 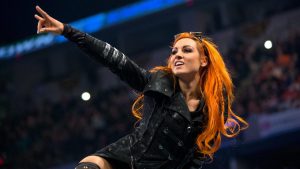 The appeal of a stereotypical Irish character is well known, and universal. Irish stereotypes have been used very well to promote many brands and ideas. Plenty of Irish ales use the tropes of the old country to promote themselves. Lucky Charms have been the staple cereal of many an American childhood. Anyone familiar with online slot games is probably familiar with the legendary ‘Rainbow Riches’ series, where pots of gold, rainbows and leprechauns appear on the reels and help players to win money. In the context of the slot games, the connotations of the Luck of the Irish are obvious, and go hand in hand with players feeling lucky when they play the slot. All of these uses are in the spirit of fun, and intended to be light-hearted. That’s not the aura you want if you’re in a simulated combat sport and need people to believe you’re a physical threat to whoever is across the ring from you.

Even when she was able to shake off the shackles of that awful gimmick, Becky always seemed to be a secondary concern to her contemporaries Charlotte Flair, Sasha Banks and Bayley. She was the last of the four to win a version of the world title, and when she lost it, she also disappeared off the PPV calendar. A year ago, Becky was struggling to get a match on television, let alone compete for championships. She had to fight and claw just to stay in the mix, finally getting a shot at the title again at Summerslam 2018. The storyline plan was for Becky to lose the match and turn ‘heel’; becoming a bad guy by attacking her victorious best friend, Charlotte. The fans had other ideas.

Becky had always had a solid base of fans, but by Summerslam, even casual admirers were invested in her. She was a hard worker with a likable personality, and she was overdue a second title reign. Charlotte, by contrast, had rarely spent a week without a championship in the past year. More to the point, Becky had (in storyline) fought to get a title match with the incumbent champion Carmella at the Pay Per View. Charlotte was parachuted in as a third wheel with minimal reasoning at the last minute. As the daughter of the legendary Ric Flair, it created the perception that she was the company’s golden child, forever gifted opportunities that other people had to slave away for.

Somehow failing to see that, WWE went with Charlotte to win the match, and then offer the hand of friendship to the beaten Becky afterwards. Becky turned on her friend, savagely beating her and leaving her laying. This was intended to get sympathy for Charlotte, and boos for Becky. The opposite happened. Fans interpreted it as Charlotte being given a title match she didn’t deserve, and then coming away with the win, screwing over her supposed best friend in the process. The audience exploded with cheers when Becky threw that first punch. They haven’t stopped since.

The Rejection Of Ronda 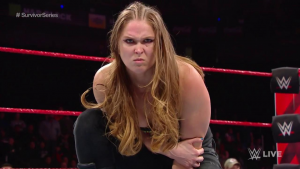 The next night, Becky came out to the ring and explained she was tired of being ignored, and from now on she was only looking out for herself. Again, WWE top brass wanted the crowd to boo her, but they wouldn’t. They agreed with her; she’d been overlooked for too long, and it was her turn to shine. With this new, angry persona, Becky found herself anew. Her character felt more rounded, more realistic and more authentic. She’s become the Queen of the savage Tweet, and the master of the withering put-down. She’s begun to refer to herself as ‘the man’. She’s become the highlight of every show she appears on, and the biggest name in the world of wrestling; all in the space of six short months.

In the process, she’s upset the apple cart at WrestleMania. Clearly, the plan at one stage was to put the undefeated Ronda Rousey, now the reigning RAW Women’s Champion, in the Main Event against Charlotte. The fans had already rejected Charlotte after the Summerslam incident; now they slowly started turning on Ronda, too. Rousey had been pushed into the title position too quickly. She’d been put in a spot that other women have had to work years for. With the rise of Becky, she also wasn’t the woman that fans wanted to see as the female face of the company. In the eyes of the fans, that position could only now be filled by Becky Lynch.

As January came to a close, Becky Lynch won the Royal Rumble. In the space of a year, she’d gone from the pre-show to the main event. The following night on RAW, she challenged Ronda Rousey to a one on one match at WrestleMania; a match that unless WWE is tone-deaf, will go on last and result in a Becky Lynch victory.

Ronda Rousey was the marquee signing, and the woman intended to take female competition in WWE to the next level. Becky Lynch is the woman who’ll surely end up wearing the crown.