Alabama has been assembling a recruiting class that is far and away the best in the country in terms of recruiting rankings. You might say the Crimson Tide have already claimed the 2015 recruiting national championship. That Class of 2015 being put together masterfully by Nick Saban and his staff includes one of the top tight ends in the country, which just so happens to be one of the top recruits from the state of Missouri. Hale Hentges, a four-star tight end according to the 247 Sports composite ranking, committed to Alabama over the Memorial Day weekend. It just so happens, this trailer was supposedly parked just across the street from where Hentges attends high school… 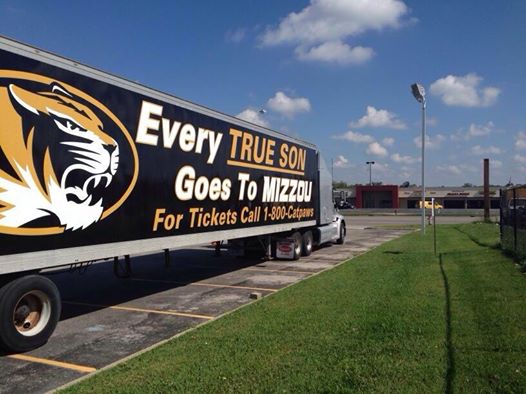 The exact location of this trailer has been unconfirmed and locating the spot on Google Earth is a tad difficult without knowing the area too well, and going through Google Street View just gets me lost every time, but a quick look at the surrounding area around Hentges’s high school suggests this is not right across the street from the school as it appears the school is surrounded by residential buildings. It would be more likely this would have been seen on one of the major roads nearby the school. If Missouri really did place this trailer in a spot en route to the school as a response to seeing one of the top recruits in the state go to a powerful conference rival, that is some Grade-A trolling effort being put on display.

UPDATE: It seems this is not an effort to convince an Alabama recruit to change his mind, but instead is targetting another top in-state recruit. According to one of our readers…

@CrystalBallRun it’s across from Rock Bridge HS in Columbia where 4* WR Alex Ofodile goes to school, not in Jefferson City where Hale goes

Alex Ofodile and his dad both told me they believe the ‘True Son’ trailer outside Rock Bridge is a “coincidence” pic.twitter.com/u2f2NUWLZH