The very un-organic narrative that has arisen already in this baseball season is whether the Mets are going to “take back the city” from the Yankees. Well, the Yankees are 0-1 and the Mets are 1-0, so the sample size is fairly small. And if I were the Mets I’d worry more about taking back a playoff spot than taking back the intangible hearts of the city.

But when it comes to the food at both home stadiums, the battle is already over. The Mets are widely regarded as having first class food options at Citi Field, as well as a wide variety between the simple and the sublime. So they can hold their own when compared to most ballparks. Lisa Swan, who is the Yankee half of the blog Subway Squawkers and goes to plenty of games in the Bronx, bemoans the lack of good food options at the House that Steinbrenner Built:

You can eat like a king at Citi Field, even if you are sitting in the cheap seats. Meanwhile, at Yankee Stadium, they might as well serve soylent green, giving how awful the food choices are. Lobel’s, which with its steak sandwich used to have one of the few edible choices in the ballpark, has really gone downhill. I got food poisoning from the sushi stand a few years back, so that’s out. Parm is good, but they are hard to find if you don’t know where they are. Brother Jimmy’s is no Blue Smoke, and Johnny Rockets is no Shake Shack, and both places are known more for their restaurants’ atmosphere than their food, anyway. (…)

To add insult to injury, in New York City, a place famous for great pizza, the Mets have Two Boots pizza — a fun choice — while Yankees have Papa John’s stands. Really? In a city with Lombardi’s, Roberta’s, Denino’s, and a gazillion other pizza choices, they get Papa John’s? What, Domino’s wasn’t available? 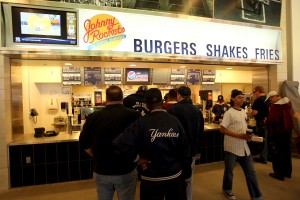 Lisa also blasts the new Stadium’s “Bases Loaded Burger”, which is fried macaroni and cheese bites on a burger, as being to unwieldy and messy. Her other big complaint is that you can only get the really good food in the exclusive club sections. It’s ironic because when you watch a Yankee game, at any given time you’ll see ads behind the plate for their Yankee themed “NYY Steak” restaurant, which I’ve been to and is very good. But I can understand her beef (I intended that pun) when you see all these inventive food items like Churro Dogs and Derek Holland’s tater tots (which could also be messy), and you go to Yankee Stadium and get Johnny Rockets and Papa John’s, which you can get anywhere.

But it’s up to you New Yorkers and tourists to decide whether she’s right on the money or being too harsh.

(P.S. I actually give the cheesesteaks from the Carl’s Steaks stand at Yankee Stadium a decent review. They also sold chicken sliders with fries in buckets for $25 during the Stadium Series hockey games in 2014. Many of those fries get leftover anyway … or get thrown at Devils fans who show up when the Devils aren’t even playing in the game. True story.)