Here’s one thing we all learned from Michael Jordan’s playing career: You don’t beat him at home when the money is on the line. The same is now true in the courtroom, where there was over 8 million dollars on the line in Chicago Federal Court … Chicago … Federal Court.

Jordan sued Safeway, who owned the defunct Dominick’s … a Chicago based chain … for using his name on this ad for steak: 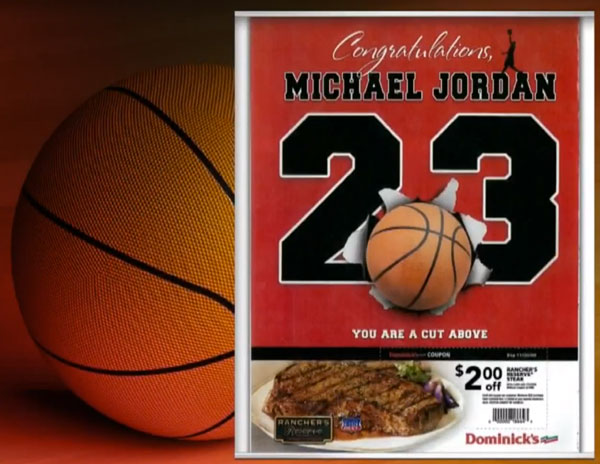 Safeway believed that this ad only entitled Jordan to $126,900. But Jordan won a decision that will pay him $8.9 million, and you can see why this was lost before it was won. Interesting how the ad used the name but you can tell that they thought they were in the clear when they didn’t use Chicago Bulls logos, or opting for the hysterical fake Jumpman logo that got a Beijing company off the hook (even though the name of that company is “Qiaodan” … which is “Jordan” in Mandarin.) But here in the United States, using his name is a different animal all together, The name “Michael Jordan” which is synonymous with not only greatness but with revenue, is gold. And they tried to get away with it in Chicago? Where Jordan owns a steakhouse?

Bottom line: If Jordan’s name couldn’t be used for video games without his consent, this small supermarket chain never had a chance. And the best part is that Jordan plans to donate all the money to charity. Chicago wins again.