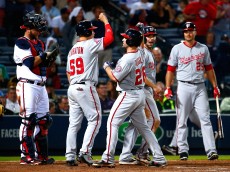 If there were two entities that were in bad need of a renaissance, it’s the 2015 Washington Nationals, and the career of Dan Uggla. Going into Tuesday night, the Nationals … most people’s pick for 100 wins … were 7-13 while Dan Uggla … released twice last season … was hitting .135 with Washington. Tuesday […]