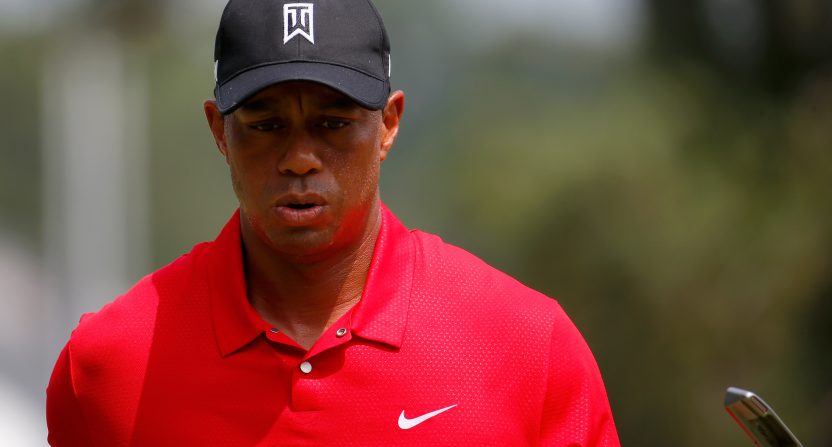 On Thursday, Tiger Woods underwent a fourth back surgery. He will reportedly miss about six months as he recovers, meaning he won’t be playing in any majors in 2017. Given that he’s 41 years old and that might not have much of an itch to come back, it’s fair to wonder whether there’s much golf left in Woods’ future.

Of course, there was a time ago when 18 majors seemed like a lock for Woods. After he won the 2008 U.S. Open essentially on one leg, there seemed no limit to his potential career total. Of course, Woods had some hiccups in his personal life after that, and his body began to break down and, well, things have never been the same.

Over the last few years, there have been two constants in Woods career: 1) People have predicted he would keep winning majors. 2) He has not won any majors.

Let’s go year-by-year through the “Tiger is gonna win a major this year” cold takes.

Coming off an up and down 2010 season that saw him finish No. 2 in the world despite not winning a tournament, Woods seems like a good bet to break through in 2011.

Tiger will win at least 2 majors, winning the Masters running away from everyone. The momentum will not stop there, as he will reclaim the No. 1 ranking by April.

Meanwhile at Golf.com, other PGA Tour pros weighed in on Tiger’s outlook, with just about all of them saying Woods would win a major. Said Brad Faxon:

“I think he’s going to play great — he’ll win an event and also a major. He played well at the end of the year, and he had a chance to win a couple of times. It would be more of a shock if he didn’t win.

Despite Woods’ major-less 2011, many observers again foresaw him winning a major in 2012. Leading up the Masters, there was a swell of optimism about Tiger’s odds.

“@JPF87: @gunitradio In your opinion, what are the odds Tiger wins a major this year? 15:1? Worse?” better. He WILL win the Masters

Was asked last week if I though Tiger would win a major this year and the answer was yes. I wont change my mind.

First major of the year starts today. The Masters at beautifull Augusta!! Who will win? My money is on Tiger..

Tiger did not win the Masters, and he did not win the U.S. Open. Still, a Bleacher Report columnist wrote a piece headlined, “Tiger Woods: Why Golf Legend Will Win a Major in 2012.”

Before 2013 even began, a writer at PGATour.com had issued this cold take:

My thoughts on Tiger? He’s going to win a major championship in 2013. Woods was first in regular season FedExCup points, second in scoring average, second in earnings. If Tiger stays healthy, he will pass Jack Nicklaus in major championships and Sam Snead in total wins.

Soon after that, an NFL running back got in on the action.

Tiger will win a major this year.

Some predicted Tiger to win the Masters.

@iambeezee Out on a limb and picking Tiger to win Masters. If Phil's phat putting grip works in Houston, he's my second. Then @JustinRose99

Others thought it’d be the U.S. Open.

Unoriginal pick, but I'm going Tiger to win U.S. Open. at Merion. Won't have to pull the driver that has gone kookookachoo on him of late

And others went with the generic “a major” prediction.

The following year, enthusiasm for Tiger’s major chances diminished a little, but some people still picked him to get No. 15.

Tiger will win a major this year!!!

The San Fransisco Chronicle ran this unambiguous prediction on a Jan. 2 story:

To answer the most pressing and popular question in golf: Yes, Tiger Woods will win a major in 2014. He will end his draught and squash the nonstop chatter about his long search — coming up on six years in June — for another victory in one of the game’s marquee events.

Despite having gone nearly seven years with a major title, Tiger was a popular pick to win the 2015 Masters.

Tiger Woods has arrived at Augusta National for the Masters, which he'll win. pic.twitter.com/ccXpYYzZeV

Tiger is going to win the Masters. Calling it now. Lol

Bugger it I'm going to put it out there and say tiger will win the masters this week.

Woods, though, he’s finished outside the top six one time at Augusta since 2004. One time. He probably should have won the thing in 2013, too. Maybe he won’t win it next year, but you can bet he’ll at least be in the mix on the weekend.

After a poor first round, Tiger shot under 70 on Friday and Saturday and was in the hunt going into Sunday… when he shot a 73 to wind up tied for 17th.

Another year, another set of “Tiger will win a major” takes.

Golfweek asked Augusta National chairman Billy Payne about Woods participating in the Masters and got more than they bargained for.

GW: The Masters has such a special connection with its champions. I’d like to ask your thoughts about a couple. We saw Tiger Woods last month talk about the uncertainty of his future. Does that concern you? Do you think we’ll see him back?

BP: Yes. I’ve answered that question a thousand times the last several years, and I have predicted not only will we see him back, we’ll see him win again. He’s that extraordinary a talent. I know he’s had a lot of medical issues, but he’s just so good. So yes, we’ll see Tiger re-emerge as a great player, certainly.

By this point, predictions about Woods winning another major were sometimes sarcastic…

**Bets mortgage on Tiger to win the Masters** https://t.co/EBMBFTy1bQ

Or accompanied by an ambiguous “lol.”

Tiger Woods will win the Masters next year lol

Yes, believe it or not, people are still at it.

The sportsbook Bovada listed Woods at 5-1 to win a major, and some people like those odds.

A column on Fox Sports published in January “boldly” predicted Tiger to win a major in 2017.

Yep. We’re beginning with a bang by predicting Woods to rediscover his mojo, win a 15th major title and move within three of Jack Nicklaus’ record haul of 18.

With his well-documented injury woes, Tiger will need a whole lot of luck on his side but his equal-tournament high birdie count at this month’s Hero World Challenges suggests the old magic might still be there.

Meanwhile, Golf Monthly published a piece called “Why Tiger Woods Will Win Another Major.” The article criticized people for writing off Tiger after almost a decade of failure.

How can a golfer be washed up by the age of 40? Especially when he is, what some refer to as, the ‘Greatest of all Time’.

Well, now Tiger is out for six months, destined to go another year without a major. The future is uncertain for Woods, except in one regard: When 2018 rolls around, someone will pick him to win a major.