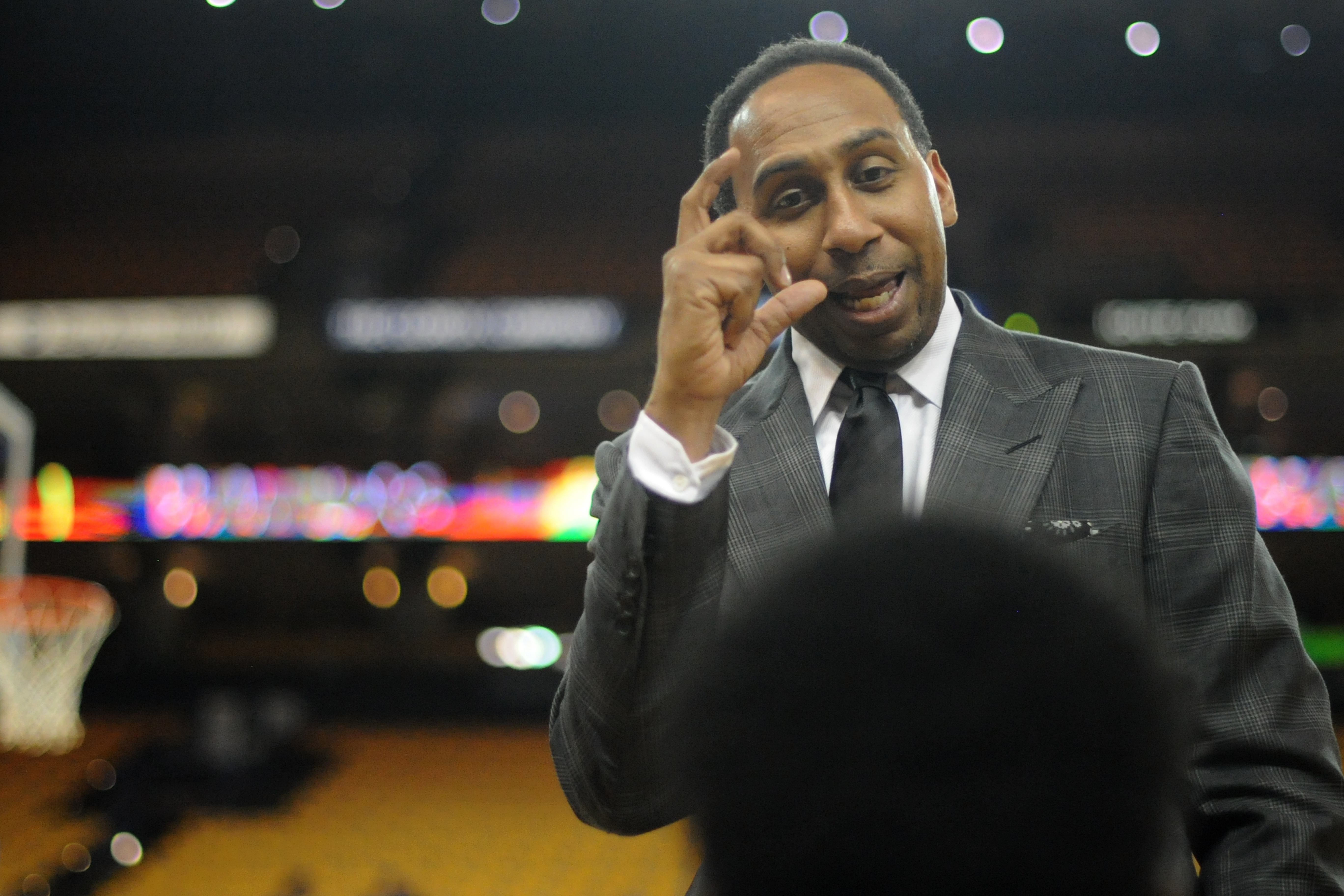 During an appearance on SportsCenter Tuesday night, ESPN personality Stephen A. Smith, despite having job that pays him a seven figure salary to talk about sports, complained about having to travel throughout this NBA season to cover NBA games because there are too many blowouts. He told SportsCenter John Anderson:

I have no problem with you and others, particularly fans, enjoying the game. I love the game of basketball. The difference between me and all y’all is that you have this beautiful, comfortable, immaculate studio that you work from. Unfortunately, I have to go on the road and travel throughout the season to watch one lopsided contest after another, because Kevin Durant decided to tilt the balance of power…

…Don’t get me started about how enjoyable this season is. The Finals are going to be epic, assuming it’s San Antonio – Golden State (Ed note: this is impossible, as they both play in the Western Conference) or Golden State – Cleveland. Everybody else, as far as I’m concerned, they’re just playing for third, fourth or fifth place, (Ed note: shouldn’t this be fourth, fifth and sixth, as you already mentioned three teams?) which isn’t that much exciting to me (sic). I’m sorry, I don’t blame the fans, I certainly don’t blame you, but y’all don’t have to catch connecting flights and travel all year long just to watch blowouts. That would happen to be me.”

After hearing that, we thought it would be a fun exercise to note certain instances when Stephen A. Smith complained about other people complaining.  Among other things, Stephen A. does not like when people complain about:

The easy culprit, of course, is Hunter. He’s the guy who runs the NBPA, the one with a prosecutor’s background instead of a labor negotiator’s. But that’s the obvious, simplistic way out of things. The bigger, more appropriate culprits are the players, all of whom should be ashamed for complaining now when they could have done something about it earlier.

We complain. Think of the shows that would still be on the air today if we were vocal and active in our support. But we never do it. A Shame

And I don't want to hear a single damn person complaining about the media's coverage of MJ. Complain about his disgrace of a father.

@lozotweets Well, work on it. and I've got bad news for you: Folks have told me I've stopped yelling considerably. Find another complaint.

@Sidnickels I'm calling it how it is based on a league I've covered for 14 years. Instead of whining about what you don't know, try 2 learn!

@pvanspartyon Cool! So we both have jobs and we're doing them. Be happy about it and stop whining.

Before I forget ladies and gentlemen, please my sure to follow my man, @RealMichaelKay so he can stop whining about his limited followers:-)

@nflplayoff think some of his teammates were hurting? It's football. You play until you can't play. You don't ride a bicycle and complain

And btw, I'm sick of folks whining about D-Rose. I say the dude is 3rd best PG in a 30-team league and ya'll act … http://t.co/GcnTyXCI

Those are the same folks who'd complain about peeps not being real enough, @BTroyXXL. Tell'em to appreciate honesty. Stop Whining!

And stop sending messages to youngsters by whining and moaning over inescapable realities @Davis007n. They need truth, not pipe dreams.

That's just real talk, @Davis007n. I'm sick and tired of US whining about stuff you know is real and applies across the board.

Stop whining,@CDPlayaa4. Skip can't respond to everyone and neither can your nor I. Folks need to stop finding stuff to complain about.

SMITH: It’s a bit disingenuous on the part of people who complain…