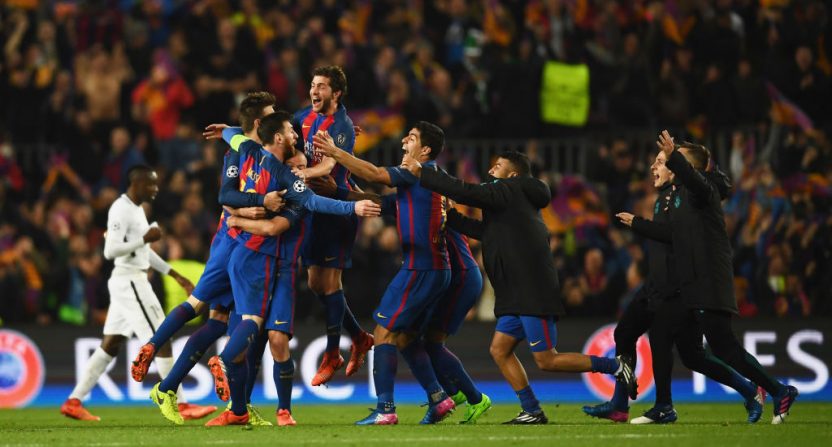 Spanish champs Barcelona pulled off a Patriots-like comeback  Wednesday night to defeat French champs Paris Saint-Germain in the UEFA Champions League round of 16.

Three weeks ago, PSG destroyed Barcelona 4-0 in Paris in the first leg of their knockout round matchup. Thus, Barca went into Wednesday’s final leg in Barcelona with a huge goal differential to overcome. While Barcelona has top class talent and has defied large odds before, nobody really gave them a shot.

Now before we give anyone else grief, we have to fall on our own sword here…

This is why you can never trust studies (H/T @phillipbupp) https://t.co/umvStFhfui pic.twitter.com/dvKMcswhgD

As you can see, we didn’t think Barcelona could pull off a comeback.  Thankfully we weren’t alone…

Steve McManaman has decided Barcelona will never win a game of football again and they need to sign 5 players, Now.

On Valentine's Day, Champions League broke up his affair with Barcelona.
Savage

Rah barcelona have been well and truly fucked

@thezombielamb Barca will probably win second leg but they are out of UCL!

Roses are red, Barca are poo. Messi's struggling, PSG are through.

Barcelona have no midfield and, right now, no chance of going through. 4-0 is a completely fair scoreline too. PSG have been superb.

Everyone was completely stunned as PSG all but knocked Barcelona out of the Champions Leag… https://t.co/lvwOH5brXf pic.twitter.com/nPCpFMpsSE

Barcelona giving Arsenal competition in the 'knocked out at round of 16" category..

#Neymar thinks Barcelona has pretty much no chance of coming back against PSGhttps://t.co/cpCTDUG76I pic.twitter.com/r4jo5EGZJN

But, despite the lack of confidence, Barca pulled off a miracle of all miracles on Wednesday.

After scoring three early goals, Barcelona cut its aggregate deficit to 4-3, and had PSG on the ropes. But minutes into the second half, Edison Cavani put PSG on the board with a goal to give PSG a 5-3 aggregate lead, and the coveted away goal tiebreaker. Thus, Barcelona would now need to score three goals to move on to the next round.

At this point it was surely over right? Twitter thought so…

VIDEO: Angel Di Maria did this to Barcelona fans after Cavani goal. ? pic.twitter.com/iePu5OzsF2

The timeline of Barcelona legend and current BBC pundit Gary Lineker is possibly the most entertaining of them all.  As Barca scored their third goal of the match, he began to start getting excited…

Barca 3-0. We could be about to see the greatest comeback in @ChampionsLeague history. @btsport 2 now.

However, Cavani’s goal brought him back to reality…

At this point, Gary was becoming sour and started to lament about UEFA’s away goal tiebreaker rule…

Always hated the away goals rule. Kills so many games. @UEFA time for change?

No goal should have a greater value than another goal. It's just not how the game works. Nonsensical, unfair and spoils many a contest imho.

By the 88th minute it seemed all but over, but an extraordinary Neymar free kick goal pulled one back for Barca to make the aggregate score 5-4 PSG. Lineker wasn’t thrilled though as he thought it was too little too late. He went on again about the tiebreaker rule…

What a last few minutes we'd have had now but for the crappy away goals rule.

He wasn’t the only one with doubts of course…

GOAL Barcelona! It’s not going to be enough, but Neymar makes it 5-4 PSG on aggregate with a gorgeous free kick. Barça needs 2 in 3 minutes

Two minutes later, however, Neymar scored on a penalty kick to make it 5-5 on aggregate…

PSG still owned the tiebreaker though and stoppage time approached. Barcelona needed one more goal in short order. That’s when this happened…