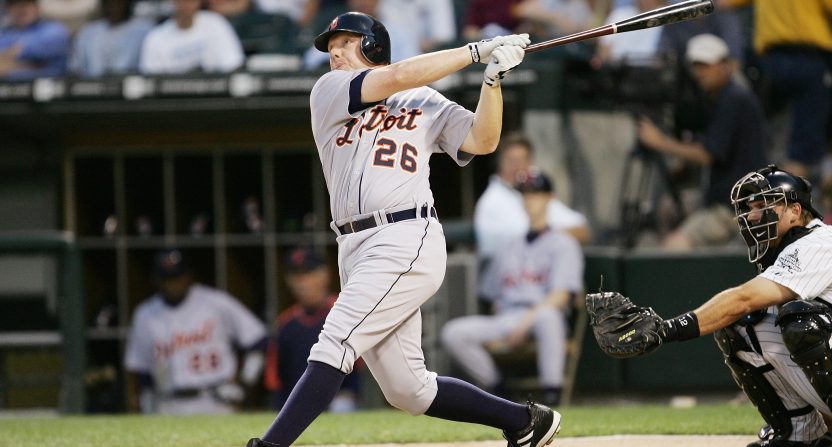 Once a 33rd-round pick of the Pittsburgh Pirates, Shelton had been left unprotected by the Pittsburgh in the 2003 Rule 5 Draft, then snatched by the Tigers. After batting only 56 times for Detroit in 2004, he put together a nice season the following year (.870 OPS), but at 25 years old he wasn’t much of a prospect. The average baseball fan had heard of Chris Shelton only in passing, if at all.

Then the calendar changed to 2006 and Shelton became a new player. After ranking among the league leaders in home runs and RBIs during Spring Training, he hit two long balls on Opening Day, then followed up with two more in the Tigers’ third game. He collected 14 hits over the first five games of the season and on April 8 was batting .700 with a 2.477 OPS.

At that point, Shelton was mostly a curiosity. Here’s the lede of a fantasy baseball column in the Las Vegas Review-Journal.

If Detroit Tigers first baseman Chris Shelton keeps the pace he has set in the first four games, he will break Hank Aaron’s all-time home run record by 2010 and nearly triple Barry Bonds’ season record. OK, here’s the sad truth to those who drafted Shelton: He’s not going to maintain this pace.

The piece continued on to caution against anointing Shelton the next Babe Ruth, while still proclaiming that, “it’s not unreasonable to expect Shelton to hit 35 homers and drive in 100 runs this season.”

But Shelton didn’t stop hitting, and by the end of that first week, he had earned American League Player of the Week honors and a barrage of unanticipated media attention. Via the Ann Arbor News:

The kid will hit, manager Jim Leyland said, dismissing the information as so obvious it should be a given to everybody.

“He needs to just get through this onslaught of attention, next Babe Ruth and all that,” Leyland said. “He’s a very humble guy, a good guy, but that’s a lot for a kid. It’s a little too early to be putting him in some of the categories people want to be putting him in.

“I don’t want to take anything away from him, but it’s a little early.”

Still, the hits and the home runs kept coming. Thirteen games into the season, Shelton had nine home runs, the most of any player that early in the season in the 106-year history of the American League. During that stretch, the San Diego Union-Tribune compared him with another Tigers sensation, then with the greatest hitter of the era.

He’s not old enough to have seen the effect Mark Fidrych had on the Motor City and baseball as a whole, but the way Shelton’s going, they may start calling him the next “Bird.” After hitting 19 homers in his first 434 at-bats — 388 of them last year — Shelton hit seven in his first 37 at-bats of 2006.

Besides the sheer amazement over an unknown suddenly hitting like Barry Bonds — rather, the way Bonds suddenly isn’t hitting — Shelton is winning people over with his youthful enthusiasm and the aw-shucks way he’s handling the wall of fame surrounding him since the Tigers returned home after Shelton’s extraordinary first week on the road.

It has been hard to miss the Detroit Tigers’ Chris Shelton so far this season, given that he has been Major League Baseball’s headline act.

As a result, it has been equally hard to miss the many shots that have been taken, locally and nationally, at Pirates general manager Dave Littlefield, the man who allowed Shelton to slip away in the Rule 5 draft three years ago.The critics apparently will get no rebuttal from Littlefield.

“Listen, first and foremost, we were wrong,” he said in an interview last night at PNC Park. “If we could redo it, we certainly would. There’s no ifs, ands or buts about it. And I’m completely accountable. I understand that.  But the reality of how jobs go is that you make mistakes at times, and you  try to learn from them and self-analyze and not make the same ones again.

Asked if he and the Pirates have used the Shelton lesson to prevent similar mistakes, he replied: “It happens every week here, every day. And it’s happened for the last 15 years of my life, learning from everything I do. Believe me: It’s one we wish we could redo.”

Shelton’s batting average dipped below .400 for the first time on April 22, but that didn’t stop USA TODAY from publishing a glowing feature days later about how, even if Shelton couldn’t keep up his inhuman pace forever, he was certainly no fluke.

For anyone wondering whether the Detroit Tigers first baseman is merely a flash in the pan, baseball people who have seen him play for a while have a prediction of their own: No matter what, Shelton’s going to hit.

“I had the chance to play with Edgar Martinez, and he reminds me of him,” says Guillen, who spent four seasons in Seattle with Martinez. “The one thing I can tell you is this guy can hit. He prepares well and has a good workout routine. Not all ballplayers are like that.”

Well, Shelton did not quite follow an Edgar-like trajectory. His average first dropped below .300 on May 6. His OPS first dropped below 1.000 on May 18. Shelton didn’t exactly fall off the face of the Earth—he slid gradually off the face of the Earth. At the All-Star break he was hitting a solid .282/.348/.508, but that line felt highly disappointing in light of his hot start.

Shelton’s numbers continued to drop, and when the Tigers acquired Sean Casey at the trade deadline, they did what would have been unthinkable three months earlier: They sent Shelton back to Triple-A.

Shelton came back up in September but didn’t play regularly. He ended the season with a .273 average and .806 OPS, unimpressive numbers for a defensively challenged first baseman.

Here’s how Shelton’s 2006 numbers broke down:

The following spring, Shelton was beat out by Marcus Thames for the final spot on the Tigers’ bench, and he wound up spending the entire 2007 season in the minor leagues. He was traded to Texas that winter and over the next two seasons hit two home runs in 145 plate appearances for the Rangers and Mariners.

After hitting 10 home runs in April 2006, he retired having hit only eight the rest of his career.

Now, Chris Shelton’s name pops up every April as a cautionary tale for fans and analysts about the danger of jumping to conclusions early in the season. When a player gets off to a crazy start, we know he might be a breakout star… or he might be the next Chris Shelton.