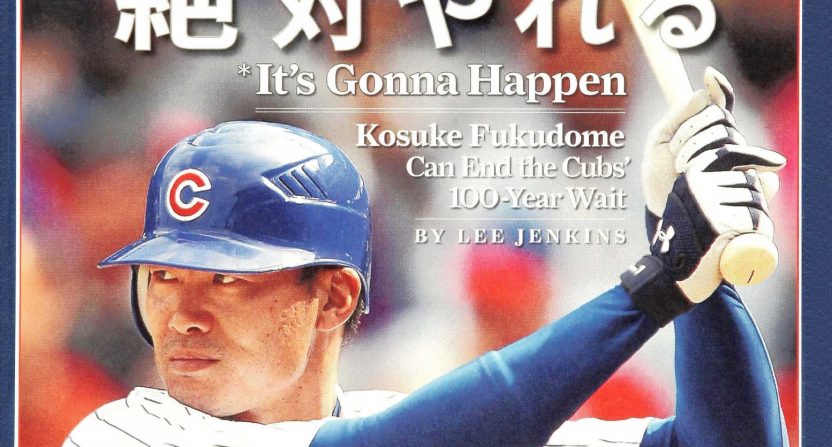 When the Cubs inked Japanese outfielder Kosuke Fukudome to a four-year $48 million contract in 2008, they had not won a World Series in 100 years. An entire century.

Fukudome was not as big a name as previous Japanese free agents Ichiro and Hideki Matsui, but he was nonetheless expected to be an impact player stateside, and he joined Derrek Lee, Alfonso Soriano and Aramis Ramirez to form what looked like a formidable Cubs lineup.

On Opening Day, Fukudome gave North Side fans reason to be very, very excited. He went 3-for-3 with a three-run home run in the bottom of the ninth, and although the Cubs lost in the 10th inning, their fans were enamored.

Local media were excited too. The Daily Herald wrote this after the opener, which featured a pregame tribute to Ernie Banks:

On an Opening Day devoted to immortalizing old Cub Ernie Banks with his “Mr. Cub” statue outside Wrigley Field, rookie Cub Kosuke Fukudome made a bid Monday to be the new “Cub San.”

Within the first week of the season, with Fukudome batting over .400, the Chicago Sun-Times called him “the Cubs’ match” that would light the team’s “flame.” The Daily Herald, meanwhile, wrote of him like he was Elvis Pressley, James Bond and Michael Jordan rolled into one:

In less than a week’s time, Kosuke Fukudome has reached rock star status around Wrigley Field.

There are chants and cheers and gasps and men wanting to be him and women simply wanting him.

Days later, the Sun-Times used Fukudome’s hot start to bash Soriano, who was struggling at the plate in the second year of a massive contract.

Kosuke Fukudome is for real. But when you put him on the same field with Alfonso Soriano, it becomes clear that they aren’t even playing the same sport.

Fukudome emphasizes how selfish Soriano’s play really is. Soriano, who’s batting .094, will snap out of it and smack a lot of homers. When he gets hot, he’ll do great things.

But when he’s cold, he has no way of getting out of it. Fukudome has dropped surprise bunts, hit long homers, worked deep into counts.

Someone tell Soriano that you don’t get three runs for a 600-foot homer.

We have this stereotype about Japanese players, that they’re fundamentally sound, playing for the team and doing things the right way.

Turns out, that’s Fukudome. He did tip his cap after that ninth-inning homer on Opening Day, but when he has tried to join in with celebrations, it’s funny-looking. He doesn’t seem used to shows of individuality.

He followed with a slight resurgence, enough to inspire the infamous Sports Illustrated cover. Over a photo of Fukudome, the magazine splashed text in English and Japanese reading “It’s gonna happen.” Underneath that, the cover read, “Kosuke Fukudome can end the Cubs’ 100-year wait.” 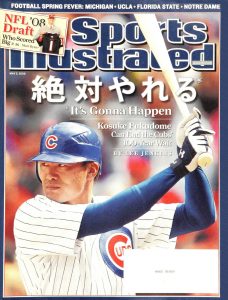 The accompanying story, written by Lee Jenkins, touted Fukudome’s surprise hot start and explained why he wouldn’t be a one-hit wonder.

Wrigley Field has seen plenty of one-day wonders over the years. Most famously, Cubs centerfielder Karl (Tuffy) Rhodes hit three home runs off Mets starting pitcher Dwight Gooden on Opening Day 1994, only to hit just five more during the rest of his major league career. (Coincidentally, Rhodes ended up in Japan, where he’s hit more homers—412—than any other foreign-born player.) But Fukudome’s staying power has nothing to do with the long ball. He will never hit as many home runs as Matsui. He won’t steal as many bases as Ichiro. What separates Fukudome is his eye.

Of course, some Cubs fans were worried about the prospect of an SI cover jinx. Not Sun-Times columnist Jay Mariotti, who argued that the outfielder was impervious:

[I]t turns out The Fukudomer wasn’t even aware of the 100-year spell when he signed with the Cubs, meaning he has no interest in burying it with boasts. And, having overcome a 53-year drought when he helped the Chunichi Dragons to a Japan Series title, the man doesn’t believe in hexes anyway.

But alas, Fukudome began to slump again, and on May 26 his average dipped below .300 for the first time. He lingered around that mark for about a month, long enough to be voted an All-Star Game starter.

By the time the Midsummer Classic rolled around, however, Fukudome was down to .278/.383/.408, unimpressive numbers for a corner outfielder. Those numbers kept dipping and dipping, until he ended the season hitting .257/.359/.379. He still had that plate discipline SI had lauded, but he didn’t have much else. His OPS+ was 89, meaning he was 11 percent worse than the average hitter, and Baseball-Reference estimates he was worth 0.6 wins above replacement. That no-good selfish showoff Alfonso Soriano, by contrast, had a 120 OPS+ and was worth 2.0 WAR in an injury-shortened season.

The Cubs did not end their title draught in 2008, getting swept by the Dodgers in the NLDS. The Curse of the Billy Goat was finally broken in 2016, by which point Fukudome was four years removed from his final MLB game.