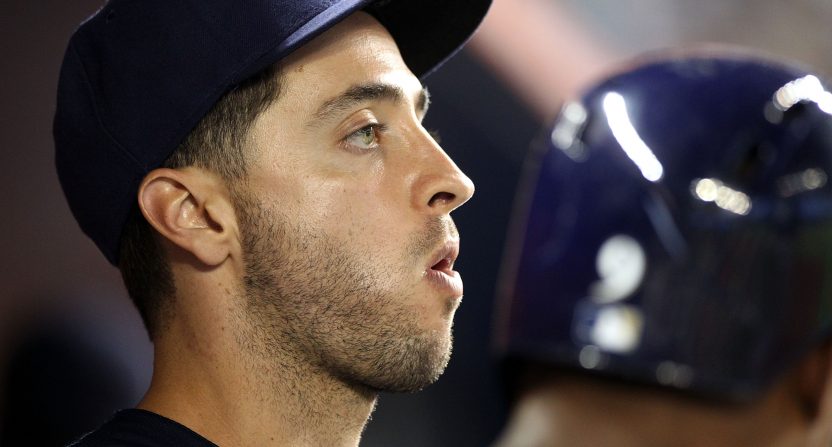 On Feb. 23, 2012, Milwaukee Brewers outfielder Ryan Braun became the first baseball player ever to have a suspension for performance-enhancing drug use overturned on appeal.

Suspended 50 games after testing positive for elevated testosterone levels, Braun had claimed drug collectors failed to follow proper drug-testing protocol and that his test was therefore illegitimate. Arbitrator Shyam Das agreed with him.

A day later, Braun stood in front of the media and read a forceful statement professing his innocence.  Here was Braun’s statement that day:

“I am very pleased and relieved by today’s decision,” Braun said in a statement. “It is the first step in restoring my good name and reputation. We were able to get through this because I am innocent and the truth is on our side.

“We provided complete cooperation throughout, despite the highly unusual circumstances. I have been an open book, willing to share details from every aspect of my life as part of this investigation, because I have nothing to hide. I have passed over 25 drug tests in my career, including at least three in the past year.”

The problem was, Braun had clearly gotten off on a technicality. He didn’t argue that the sample had been tampered with or that the test methodology was invalid, only that the collection procedure had been flawed. His appeal victory wasn’t evidence of his innocence as much as it was an indictment of MLB’s bureaucracy.

But many baseball fans, media members and even players wanted to believe that Braun had done nothing wrong. He was one of baseball’s best players, a former MVP on a potential Hall of Fame track. No one wanted him to become the latest star sullied by PEDs.

And so the willful ignorance kicked in and the word “innocent” started getting thrown around.

MLB and cable sports tried to sully the reputation of an innocent man. Picked the wrong guy to mess with. Truth will set u free#exonerated

I'm glad Ryan Braun was exonerated of this allegation. He's a great guy and good for MLB! #GoodGuysAlwaysWin

Happy for my friend Ryan Braun. EXONERATED by the TRUTH!!

About time RT @ClayMatthews52: Happy for my friend Ryan Braun. EXONERATED by the TRUTH!!

Ryan Braun has been keeping it real. #innocent #MLB

Great day for Ryan Braun and the Brew Crew! First MLB player to successfully appeal a drug suspension.. The truth shall set you free! #MVP

Others formed their own opinion, and some took a more measured approach.

After watching Braun presser http://t.co/CKXv6YtW and reading this story, sounds like Braun's telling the truth http://t.co/bpg9zqdH

I feel bad for Ryan Braun. No one will ever know if he took an illegal substance or not. He will have to live with this even if hes innocent

Very compelling stuff from Ryan Braun. No way to know if he is innocent or not, but that statement was very convincing. Definite win 4 him.

I'm not saying Braun's innocent, because I don't know. I'm saying he deserves to be SEEN as such. Subtle difference. Embrace the gray.

Even Mr. Belding chimed in.

Fellow baseball players were particularly glad to see Braun get off without punishment.

And the truth shall set you free. Ryan Braun #exonerated. Congrats to a great friend and one of the hardest working athletes I know.

Congrats to Ryan Braun on getting exonerated. Nice to see the truth prevails.

That a baby Braun. Truth always comes out pimp. Go out and ball my dude. That is all

Happy to see the truth come out about Ryan Braun. #MVP #TheU

There was an important nuance nuance missing from all of these congratulatory tweets: Just because someone has a successful appeal doesn’t mean he’s exonerated.

One writer who understood that point was the New York Daily News’ Mike Lupica, who wrote this the day of the appeal:

Understand something: The overturning of Braun’s 50-game suspension doesn’t mean Braun is clean, no matter what he says or how many times he says it or what he expects reasonable people to believe.

He wasn’t exonerated. He was acquitted. There’s a difference.

As it turned out, Lupica’s skepticism was extremely warranted. Just under a year after Braun’s exoneration, Yahoo Sports reported that his name appeared in documents at Biogenesis, a clinic that distributed PEDs to professional athletes. He wound up suspended for 65 games.  In response, he released a statement which had a much different tone than his February 2012 presser.

Here is what happened. During the latter part of the 2011 season, I was dealing with a nagging injury and I turned to products for a short period of time that I shouldn’t have used. The products were a cream and a lozenge which I was told could help expedite my rehabilitation. It was a huge mistake for which I am deeply ashamed and I compounded the situation by not admitting my mistakes immediately.

I deeply regret many of the things I said at the press conference after the arbitrator’s decision in February 2012. At that time, I still didn’t want to believe that I had used a banned substance. I think a combination of feeling self righteous and having a lot of unjustified anger led me to react the way I did. I felt wronged and attacked, but looking back now, I was the one who was wrong. I am beyond embarrassed that I said what I thought I needed to say to defend my clouded vision of reality. I am just starting the process of trying to understand why I responded the way I did, which I continue to regret. There is no excuse for any of this.

The truth will set you free, huh?